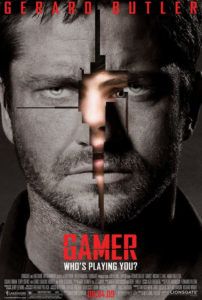 In the not-too-distant future, videogames have become truly interactive. Everyone’s logging on to play “Slayers,” the hip new ultra-real first-person shooter whose participants control actual people as their game characters. Death row prisoners “volunteer” to be the i-cons for gaming dorks who pride themselves on their accomplishments in the virtual world more than those in the real one. The prisoners fight to win their potential freedom after 30 successful games, although, of course, no prisoner has ever won. Most of them die during the authentic violence of the game, saving the federal government backers the cost of a lethal injection.

Gerard Butler stars as Kable, the top i-con only three matches away from winning his freedom. Kable makes his way through staged combat, blowing away as many people as he can, resistant to the fact that he’s a powerless drone for a 17-year-old “indoor kid” named Simon (Logan Lerman). Simon is about as versed in actual warfare as “Rockband” players are in actual guitar. Butler runs about on a pyrotechnic-laden stage, exuding his manliness, dodging bullets, and ducking from exploding debris. Remember to disengage your brain before viewing it.

Designed by seedy mastermind Ken Castle (Michael C. Hall, perfectly cast), who doesn’t much like Kable surviving so long inside his invention, the game becomes increasingly unfair for players when its creator starts pulling strings. Castle’s multi-billion-dollar virtual empire has its fingers in the prison system, bio-weaponry, and even politics, so he’s concerned when Kable comes way too close to defeating his monopoly. And though he’s on death row, our hero isn’t really a criminal; he’s a victim framed for someone else’s misdeeds. That means you’re allowed to like him. Discovering this leads to a videogame-esque one-on-one finale the audience can see coming.

Shot and edited in that shaky, choppy, nonsensical style that’s all-too-prevalent among contemporary filmmakers, the result might be a commercial had there been less dialogue. You’ve seen the same camerawork and over-stimulated cutting selling sodas, tennis shoes, candy bars, and energy drinks in commercials, so while your eyes may not be bored, your brain will be. Despite the mind-numbing aesthetics, there are actually some smart ideas at work here. Consider Castle’s other game, called “Society,” which is like The Sims, except here people volunteer to be the avatar, and they earn good money to let players take control of their lives. Kable’s wife has become such an avatar, run by a perverted obese shut-in who’s always licking his lips and caressing his greasy hands over his inhumanly large stomach.

Moments like this might be considered a satire, except there’s a conspicuous amount of exploitative nudity and violence throughout, and the filmmakers’ track record for meaningless trash doesn’t bode well for the argument that there’s a message here. Perhaps Gamer represents the next logical step in Neveldine and Taylor’s careers of making nothing but non-movies with videogame plots. They’re trying desperately to push their game-meets-movie setup and appeal to easily marketed teens. Perhaps they should retire as a directing team and give Activision or Capcom a call. Given the level of physical interaction of today’s videogames, initiated by the Wii, undeniably, the filmmakers’ concept is timely. But the product has been clearly outlined for an audience made up of adolescent boys more concerned with the amount of blood spilled than the quality of the filmmaking. If you don’t fit into this demographic, stay away. Stay far away.