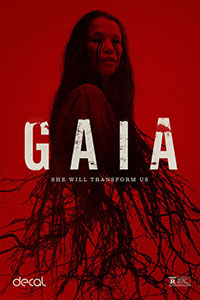 In a recent United Nations report from the Intergovernmental Panel on Climate Change, scientists from nearly 200 countries agreed that climate change might be irreversible without drastic and immediate action. Humanity is “unequivocally” responsible, the report said. Since the Industrial Revolution and our continued exploitation of fossil fuels, the planet has reacted by getting hotter. Whether you call her Mother Nature or Gaia, it’s tempting to project physiology or consciousness onto Earth. It’s as though the planet has come down with a fever to burn off the infection, and we’re the disease. The name “Gaia” usually refers to Earth’s larger interconnected ecosystem; others define it as a far-reaching singular organism (it’s also a Whoopi Goldberg-voiced character from Captain Planet and the Planeteers). The South African eco-horror film Gaia uses these ideas as a launchpad to think about Nature’s response to humanity and how it has weaponized itself with equally beautiful and horrific results.

The film opens with (the diegetic and non-diegetic) drone’s-eye-view of a forest canopy in South Africa’s so-called Garden Route region. We hear trees gently creaking, and the sound recalls floorboards in a spooky haunted house movie. Except, instead of dark hallways inhabited by ghosts, the malignant force in the woods is something far more disturbing. Below, two forestry service rangers survey the area and collect memory cards from wildlife cameras. When someone smashes their drone, Gabi (Monique Rockman) must separate from her colleague Winston (Anthony Oseyemi) to find it. Minutes later, a booby trap punctures Gabi’s foot and leaves her wounded while something chases Winston through the woods. Gabi finds herself in the company of two rail-thin white men caked in mud, living in a wilderness shack and shielding themselves from detection—not only from the rangers’ scanners but from whatever’s lurking behind trees or out of focus in the backdrop.

Gabi soon discovers that the two wildlings, Barend (Carel Nel) and his adult son Stefan (Alex Van Dyk), didn’t set their traps for her. Instead, they were targeting the forest’s blind, chittering zombies that have fungal outgrowths from their heads and look suspiciously like “clickers” from the video game The Last of Us. Formerly human, the creatures changed after breathing spores released by what Barend describes as “the Mother of Creation and Destruction.” Radical naturalists, Barend and his son worship a sentient, subterranean, and decidedly female organism—complete with a vaginal orifice in a tree that leads to a fleshy inside filled with spores and glistening, undulating mushroom fins. When they pray and give her an offering of animal flesh, she responds by producing edible sporicidal antidotes that keep them from turning into the fungal clickers. Gabi realizes she needs their help when she starts spouting fungal growths from her flesh. But Barend prepares to carry out his god’s retaliation against humanity and its “devilish abominations” of technology. 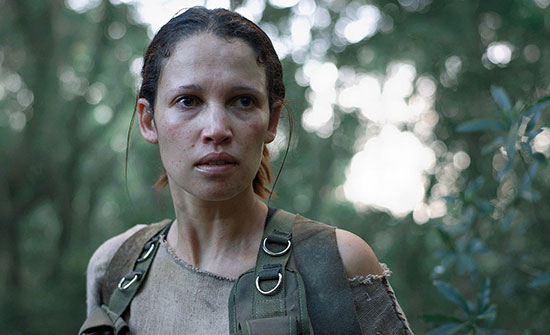 Gaia’s director Jaco Bouwer makes body horror, ecological dread, and zombie thrills visually stunning. Mycophobics will have difficulty processing the sheer number of cancer-like fungal growths that pop out of Gabi and others, most of them rendered with squirm-inducing practical effects. Bouwer and cinematographer Jorrie van der Walt capture the forest with the same blend of admiration and abhorrence that inspired Lars von Trier to make Antichrist (2009) and Werner Herzog to see the jungle as “created in anger” by God. The imagery looks sublime, gorgeous yet horrifying, but subpar CGI interrupts the pristine photography to convey spores or snakelike fungi that grow toward their prey. Still, Bouwer’s treatment approaches the wonderfully fantastical, psychedelic, and nightmarish when he explores Gabi’s mushroom hallucinations and nightly dreams of bodily invasion. Also, note the film’s use of quick edits to disturbing close-ups of the forest churning and growing; another 2021 eco-horror film, In the Earth, used a similar tactic. Sometimes Nature is downright gross.

Thematically, Gaia belongs in the same camp as M. Night Shyamalan’s The Happening (2008), in that both feature Nature reacting to destroy humanity. Eco-horror takes many shades, from movies about pollution causing animals to mutate into freakish killers, such as Prophecy (1979), to Nature-fights-back movies, such as Long Weekend (1978). Other eco-horror titles, including Annihilation (2018) and Color Out of Space (2020), depict an alien force augmenting or mutating the natural world to monstrous, yet no less luminous, extremes. By contrast, Gaia presents a heavy-handed religious parable in which Barend sees Gabi and his son forming a bond, and he responds by acting out an Abraham-style sacrifice. The film is best when focused on the secular or at least the vengeful Nature-god intent on spreading to reclaim her territory (“She’ll never let you leave,” Barend declares). One might even be tempted to read Gaia as an example of another horror tradition—that of city dwellers who venture into the wild only to find themselves undone by some combination of Nature and bloodthirsty country folk.

Gaia’s characters aren’t so much people with distinct perspectives and considered histories as representative icons, who must act out and articulate the film’s thematic concerns through unambiguous dialogue. As a result, the film keeps us at a remove, though we watch with horror as the events unfold in disturbing ways. Fortunately, it’s at once captivating and revolting to look at, and Pierre-Henri Wicomb’s eerie electronic score keeps us immersed in its purely aesthetic pleasures. But Gaia isn’t subtle about its message and resists subtext. “Every day, the human habitat resembles more closely a cage,” says Barend, who’s intent on helping his ancient god restore the natural, cage-free order of things. But neither Tertius Kapp’s screenplay nor the performances, however committed, stimulate deep emotional investment beyond appreciation of its visuals and ideas, which are enough to justify a viewing.