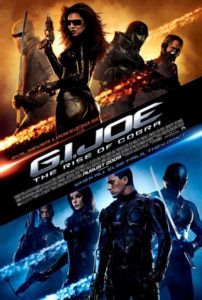 Imagine yourself as a preteen boy sometime in the 1980s, and then imagine that somehow you stepped inside a time machine that transported you to the present day, where you discover that your favorite line of action figures, namely G.I. Joe, has a new live-action movie in theaters. You buy a ticket, balking at how much prices have gone up in twenty years, and sit down for two hours worth of nonstop loud explosions and snazzy special effects. When it’s all over, you might not like how they changed around some characters, but for the most part, it was pretty good. Hell, it was better than Masters of the Universe starring Dolph Lundgren as He-Man.

There are really only a few options for viewers of G.I. Joe: The Rise of Cobra: Either you’ve time-traveled from a period when the toys were in their prime, and therefore you unapologetically love this movie because it brings those toys to life, or you’re a modern-day moviegoer who, with any luck, sees right through this over-priced Hollywood dribble. Chances are you’re the latter. But then again, there’s a third option, a worst-case-scenario that shouldn’t even be considered, except that it’s a sad truth all movie critics must accept. It’s that there’s a rare sort of viewer who still argues the brilliance of Transformers: Revenge of the Fallen, who will inevitably adore this movie for all its mindless bravado, its not-so-special effects, and its overt preoccupation with being big and stupid.

Admittedly, the prospect of a movie based on Hasbro’s G.I. Joe line intrigues me, being that most of my childhood was spent staging elaborate battles between 3 3/4” figures, some “The Real American Hero” and others from the forces of that ambiguous terrorist entity known as Cobra. What exactly was Cobra after? World domination, of course. But there was no real plan, per se, just a laundry list of failed schemes. Had they taken over, they probably wouldn’t know what to do next. They’re not fighting for any cause or political mindset; they were just another way to entertain younglings by establishing right from wrong. And that’s what G.I. Joe amounts to: life lessons learned by means of an international unit (they’re not just “American” anymore) fighting against terrorism. That there are battles over land, sea, and air, with all manner of futuristic ships and rockets and nanotechnologies, is the icing on the cake.

Rather than unfolding, the movie’s plot unnaturally coils around those moments that must be included in a movie based on G.I. Joe, like forced character introductions and silly ways to connect them. So we have Destro (Christopher Eccleston) and Baroness (Sienna Miller) doing dastardly deeds with ninja henchman Storm Shadow (Byung-hun Lee). We have heroes Duke (Channing Tatum) and Ripcord (Marlon Wayans) who are recruited into the super-secret task force assembled to stop them. Duke and Baroness used to be an item, so there’s that. We have America, in all its glory under the auspices of the President (Brit Jonathan Pryce), backing G.I. Joe leader General Hawk’s team: electronics wunderkind Breaker (Saïd Taghmaoui), “the best ninja ever” Snake Eyes (Ray Park), gun-loving tough-guy Heavy Duty (Adewale Akinnuoye-Agbaje), and the brainy Scarlett (Rachel Nichols), whose last name is O’Hara, a wink this movie’s audiences probably won’t get. Using ultramodern gizmos like super-suits that allow them to run fast and cause lots of property damage, the good guys stop the bad guys. Do you need to know more?

You might wonder about Cobra Commander, the raspy-voiced head villain from the 1980s cartoon on which this film is based, sort of. He’s played by Joseph-Gordon Levitt, redubbed “The Doctor,” and barely mentioned throughout until the finale. Some loyalist fans might have a problem with that. If so, they’ll probably also have issues with how Zartan (Arnold Vosloo) and Dr. Mindbender (Kevin J. O’Connor) are represented. There’s no intention of faithfulness, not that there’s much canon to be faithful to beyond toys, cartoons, and comic books. The filmmakers have resolved to draw out the franchise’s cartoonish foundation through campy, tongue-in-cheek dialogue and action, versus the usual fan-service for this kind of flick.

Director Stephen Sommers, helmer of overwrought duds like The Mummy and The Mummy Returns, propels this thing with a blind enthusiasm that’s at once admirable and deplorable. His aim reaches for intended cheesiness on a blockbuster scale. But shouldn’t cheesiness go hand-in-hand with low-budget production value rather than this film’s reported 200 million dollar price tag? With all that money, shouldn’t the end product be more than a series of ironic clichés too dull to be entertaining? And shouldn’t Sommers have learned this lesson from his bomb Van Helsing?

Some scenes might be more enjoyable if we knew that we were supposed to be laughing at them. Except, G.I. Joe: The Rise of Cobra isn’t Team America: World Police—it’s not a comedy about an anti-terrorist group. At least I don’t think it’s a comedy. Since we’re told this is a big-budget franchise actioner, there’s an assumed level of comic relief communicated through annoying characters, like Ripcord’s dumb comments that know no bounds. But consider every moment with Dennis Quaid as Gen. Hawk, the most go-get-em military man since John Wayne last appeared onscreen. Or the multitude of corny flashback scenes, like when Baroness remembers how much she loved Duke. These characters are hilariously hackneyed, although I doubt the filmmakers wanted us laughing at the movie, at least not in the contemptuous way we do.

Go figure that the five credited screenwriters and story consultants didn’t do the film justice. Funny how a film gets worse when more writers work on a script, isn’t it? You’d think they’d all be able to catch each others’ faults. Alas, that’s not the case here: The script rings with embarrassingly over-the-top dialogue (they say “Yo Joe!” with complete seriousness). The massively conceived through shoddily animated computerized effects sequences look barely ample for a videogame, the underwater scenes above all. In fact, the entire procession plays out like you should have a controller in-hand, guiding these personality-deficient characters through their super-suit upgrades and save-the-world heroics.

Other critics have praised Sommers’ efforts, somehow finding so-bad-it’s-good genius behind his convoluted production thanks to their go-with-it attitude. Perhaps you’re watching merely to shut your brain down for two hours. Fair enough, but chances are this mess won’t allow your mind its brief hibernation; instead, you’ll be awoken by the inanity onscreen. Pure escapism, for me, involves a uniform production that entertains not only through its energy, but its aesthetics and narrative. There doesn’t need to be any grand meaning behind it, but some semblance of emotional ties to characters or involvement in the plot, however slim, is required. Here, you’d be better off buying the toys and acting out your own adventures—the result would prove more satisfying.