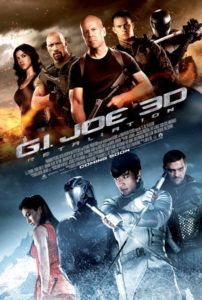 In their short partnership, Paramount Pictures and Hasbro have produced some lousy summer movies based on popular franchises from the 1980s. The worst of these—last year’s Battleship and the sequels to Michael Bay’s Transformers—are the kind of big, dumb blockbusters that represent everything excessive and awful about Hollywood. They’re marketed to youngsters and also thirtysomething fanboys who grew up watching the cartoons, reading the comics, and playing with the action figures. And out of nostalgia alone, many of us eat this stuff up. The biggest disappointments, at least for this thirtysomething critic, are Paramount’s movies based on the G.I. Joe franchise, of which I was an avid enthusiast in my youth and beyond. But no amount of fond memories or apologetic fandom can defend 2009’s G.I. Joe: The Rise of Cobra or its 2013 sequel, G.I. Joe: Retaliation. These are movies so extraordinarily vacant of logic or charm or coherence that they force us to wonder what—besides a huge paycheck—convinced anyone to get involved.

After the underwhelming reception of The Rise of Cobra by both audiences and critics, Paramount and director Jon Chu announced their plans for a sequel that would distance itself from the first movie. In essence, they would reboot the franchise yet somehow stay true to the developments of the original. Though they were ready to unveil the result in June 2012, they delayed the release until March 2013 to convert the movie to 3D. The screenplay by Zombieland writers Rhett Reese and Paul Wernick does away with the majority of characters established in the first, leaving only a few desirables to remind us of the events that inspired Retaliation. The black-clad, mute ninja Snake Eyes (Ray Park) and his white-clad nemesis Storm Shadow (Byung-hun Lee) are still mortal enemies; disguise expert Zartan (Arnold Vosloo) still goes about acting as the American President (Jonathan Pryce); Channing Tatum still doesn’t have any personality as Duke.

You get a good idea of how little energy the filmmakers have put into their scenario when, in the opening sequence, the G.I. Joes codenamed Roadblock (Dwayne Johnson), Lady Jaye (Adrianne Palicki, AKA the Wonder Woman that wasn’t), and Flint (D.J. Cotrona) attempt a covert break-in at night. Armed guards patrol the perimeter but, while trying not to be seen, the Joes use a metal melting gizmo to cut through the chain-linked fence with a smoldering fusion glow that could probably be seen from space. Somehow, no one sees them. Are they even watching? As the Joes move in, they stop under an overhead light which illuminates them for all to see. Have these supposedly expert soldiers never heard of covert ops or night vision? Before long, the terrorists known as Cobra have broken their raspy-voiced leader Cobra Commander out of prison to assume control by destroying the world or some such nonsense. During the escape, Cobra Commander turns to his still-imprisoned weapons dealer Destro and tells him, “Your out of the band.”

Usually, studio reboots come standard with added gravitas (see Batman Begins or The Amazing Spider-Man) but Retaliation has no such advantage. Instead, characters speak in dull modern colloquialisms, such as “I’m just sayin’” and “Really!? Really!?” When we first meet with the short-lived Duke, he’s engaged in fratboy banter in Roadblock’s home over a military game on Xbox; perhaps they’re playing G.I. Joe: The Official Movie Game. Their exchanges are thoughtless and boring, the characters no less one-dimensional than a plastic toy. Fortunately, Duke doesn’t last very long (Tatum reportedly had scheduling conflicts and could not commit to the entire sequel), and unfortunately, his replacements are exceedingly bland. Roadblock is just “The Rock” but not as pumped-up as his recent turns in Pain & Gain or Fast & Furious 6; Lady Jaye is a sex object; Flint has no personality whatsoever. None of the performers seem to be enjoying their roles, especially not Bruce Willis, who plays “the original G.I. Joe” named General Joseph Colton. One thing is for certain: he was well paid for his appearance.

Chu’s experience directing action films is nil. He’s helmed the second and third Step Up movies and the doc Justin Bieber: Never Say Never—an odd CV for an action movie director. Once the onscreen mayhem begins, Chu controls the action scenes, and the audience never loses track of what’s going on. This will be my only compliment to Mr. Chu, who also manages an impressive sequence in the Himalayas where Snake Eyes and Storm Shadow face-off, and then, along with his newbie Jinx (Elodie Yung), takes a flying leap in a high-wire mountainside stunt against a gaggle of disposable ninjas. However thrilling this 5 minutes of screentime may be, it’s undone when the ninjas arrive in Japan’s ninja HQ, where the Blind Master (RZA of Wu-Tang Clan) monologues in a poor, cornball, stereotypical Asian accent about Storm Shadow’s misplaced villainy. Meanwhile, Zartan blows up London, the Joes jump into action, and the day is saved. Well, saved except for everyone but the millions dead in London, that is. But who’s counting bodies anyway? It’s about who won.

Not only is the action numbingly unrelenting (in a bad way) and the storytelling silly, but the content of G.I. Joe: Retaliation borders on offensive. Beyond barely taking a moment to grieve for the countless dead in London and treating such rampant violence like an emotionally disconnected videogame, the movie joins the Hollywood bandwagon (along with Red Dawn and Olympus Has Fallen) of publically mocking North Korea—a curious politicizing of movies today that’s more offensive in principle than in practice. But most offensive here is the lack of character development and the cartoonishness of everything onscreen. Despite Paramount and Hasbro’s efforts to reboot the franchise, it feels like they didn’t even try to improve on The Rise of Cobra. Here, we’re expected to care about the fates of these human dolls as they shoot guns and utter mindless dialogue, but the only viewers who might care are very young boys or adults with the mind of a child. Even as a child, I would have scoffed at Retaliation, having seen a better adaptation with the 1987 animated version G.I. Joe: The Movie. After all, if I’m going to be watching a cartoon, I prefer it to be animated.