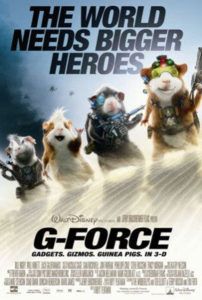 G-Force is a movie about spy guinea pigs voiced by Hollywood celebrities. They use high-tech gear to foil the plot of a nefarious super-villain and prove that small is the new big. Are you sold yet? Your children are. And that’s really all that matters, isn’t it? Youngsters like to see talking animals doing people things, so you’ll have to endure 90-minutes of hell. If you’re angry about the situation, savor your feelings and store them, and then remember these moments when they’re teenagers. When that time comes… revenge.

Featuring the voice talents of Sam Rockwell, Nicolas Cage, Tracy Morgan, Jon Favreau, Penélope Cruz, and Steve Buscemi, and the human acting talents of Bill Nighy, Zach Galifianakis, and Will Arnett, the producers from Walt Disney Pictures must’ve paid out some big salaries. Why else would such notable names endure this embarrassment? Most of the performances are stagnant, except Cage who is almost unrecognizable as the voice of a nerdy mole. Meanwhile, the humans look uncomfortable, humiliated even in their roles, probably realizing that the green-screen they’re talking to will inevitably be an animated rodent of some kind. Hopefull, the paycheck was worth it.

There’s no point in explaining the plot. The guinea pigs save the day. End of movie. Imagine a Michael Bay film in all its inanity shrunken down to bite-sized proportions for the kids, but just as loud and obnoxious and nonsensical. Same thing here. Basically identical to the structures of Bad Boys or The Rock or similar action fare, G-Force is the worst kind of entertainment because all that money was spent on celebrities and CGI effects, and yet the end result is utter garbage any self-respecting 10-year-old would laugh off as kid’s stuff.

You might ask who in their right mind signed off on spending millions for a movie about talking guinea pig spies? Undoubtedly the same type of person that signed off on Beverly Hills Chihuahua. Either they’re completely insane, or a super-genius for being aware that Americans rush to theaters whenever talking animals are involved (e.g. Alvin and the Chipmunks). Sadly, the person is probably a super-genius, and his name Jerry Bruckheimer, producer of the Pirates of the Caribbean movies. Bruckheimer is a name that garners immediate respect from studios looking to make a profit ahead of a superior product. Think about that when you’re standing at the box-office, getting ready to pay money for this dribble.

This is the kind of children’s entertainment that adults can’t wait to get away from. During my screening, I watched parents text and chat amongst themselves, while kiddies watched the rodent extravaganza ensue onscreen. Maybe the audience had trouble sympathizing with chubby little furballs—one child cheered with glee at the possibility of a guinea pig being eaten by a snake during a pet store scene, and then he let his disappointment be known when the rodent survived its ordeal. No one seemed interested in what was going on, and clearly, I wasn’t engaged since I stopped watching to observe the audience’s reactions.

Because G-Force will no doubt rule the box office its opening weekend, the world remains subject to movies like this, rolling our eyes at its complete stupidity but then secretly running off to catch a screening “with the kids.” And yes, of course, your children will enjoy this movie: It contains all manner of scatological jokes on a miniature scale, lots of fast-moving special effects, and the talking guinea pigs are “cute”. But just because children will enjoy it doesn’t mean you should have to tolerate it. Exercise some parental restraint. Tell them no, and then force them to watch an animated Disney classic or Pixar film for their own good. You’ll both get something out of it.