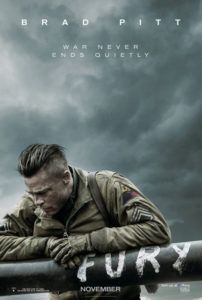 Director David Ayer makes no exceptions for his American exceptionalist Fury, a World War II story about a five-man American tank crew facing off against a legion of German soldiers. Usually associated with Los Angeles urban crime dramas (Harsh Times, Street Kings, End of Watch), Ayer applies his sense of situational realism with his affinity for Hollywood-style dramatics in this gritty war picture. While costumes, machinery, and on-location landscapes all contain a striking verisimilitude, the film isn’t mined from history, but rather Ayer’s palpable appreciation of classic war yarns, namely those by Samuel Fuller (Steel Helmet, The Big Red One), that were churned out one after another during Hollywood’s Golden Age. It’s familiar material—macho men perform bravely and carry out their duties regardless of the absurdity of their orders, exclaiming, “Best job I ever had!” as they mow down Nazis at the tail end of WWII, circa April 1945. It’s all very gung-ho stuff, with a few poignant moments to curb the rampant jingoism.

Ayer’s well-researched setup concerns the bond between soldiers who, despite their disparate ‘real world’ walks of life, form a connection when fighting alongside one another on the front lines. Brad Pitt plays Sgt. Don “Wardaddy” Collier, a 2nd Armored Division tank commander who has fought Nazis from Africa to the Netherlands. Now he’s in Germany, where the war is all but over, but the Nazis still have fight left in them. Wardaddy commands a team consisting of stereotyped grunts inside a metal coffin; it’s their home, and they’ve dubbed it “Fury”, which is stenciled on the 76mm barrel. Each soldier comes with their own “war name” and a two-dimensional personality: an abrasive and rather terrible hillbilly, Grady “Coon Ass” Travis (Jon Bernthal) serves as a shell loader; the resident religious spiritualist Boyd “Bible” Swan (Shia LaBeouf) runs the cannon; the Mexican-American driver Trini “Gordo” Garcia (Michael Pena) womanizes and drinks too much. But our entry point into this unique wartime microcosm is fresh-faced newcomer Norman Ellison (Logan Lerman), a military typist unprepared for the ugly battles ahead.

Over the course of the film’s 24-hour timeline, Norman serves as our proxy for Wardaddy’s marauders, a tough group with skins of leather. On the approach to clear a small town, Norman fails to shoot down some German soldiers, and so Wardaddy resolves to administer a cruel initiation—he slaps the boy around and forces a gun into his hand to shoot a captured SS officer. At first, Norman isn’t cut out for war; he seems to have decency the others lack. During an interlude in a secured German town, Wardaddy and Norman engage a woman (Anamaria Marinca) and her pretty teenage daughter, Emma (Alicia von Rittberg), for a dramatic interlude. It’s a civilized break until the others enter the room and spoil it, and the scene gives way to a grim and tragic turn. It’s an excellent sequence in an otherwise commonplace actionized war story. And it allows Pitt and Lerman, who are the film’s only soldiers who feel developed in any kind of meaningful way, to layer their characters.

To set up the climactic battle, Wardaddy receives some brief, high-stakes orders from his captain (Jason Isaacs), and they’re quickly off with several other tanks to protect a crossroads from any Nazi traffic. On the way, they’re outmatched by a German Tiger tank, a heavy gunner that makes quick work of the “Fury” crew’s escorts. The final showdown finds Wardaddy’s crew immobilized and alone at the crossroads, facing an SS battalion some 300 strong. For reasons never fully explained, Wardaddy has a particular hatred for SS—he flares up at their mere mention of their presence. So he resolves to stay and fight a losing battle, and the others follow him. The action comes with a unique look courtesy of Ayer’s research. Nighttime gunfire unleashes glowing tracer rounds, which burn in reds and greens; the battle sequences could be inspired by Star Wars, but perhaps it’s the other way around. Cinematographer Roman Vasyanov shoots on English soil in almost perpetual fog, which allows tracer rounds to glow even during the day. The rest of Vasyanov’s color scheme is muted, muddy, and gray to reflect the downturn of the war.

François Truffaut famously said that it’s impossible to make an anti-war film, because the depiction of violence inherently thrills the viewer, and the thrill of violence contradicts any anti-war theme. Fury could hardly be considered an anti-war film, and yet it contains anti-war film moments that suggest a “war is hell” mentality, which clashes with its action-centric approach. Just as Ayer purveys opposing strains of realism and Hollywood heroism, the director’s production contains scenes of heavy emotional consequence (the tragic interlude with the German women underscores the psychological damage incurred by soldiers) undone by long stretches of exciting violence, and this contradiction in tone leaves the film unbalanced. The downfalls of war are less on Ayer’s mind than recreating the most intense segments of Saving Private Ryan; given Fury’s surface realism and his characters’ male camaraderie, it’s easy to make that connection.

Ayer’s brief moments of pathos weigh far less on the viewer than his prevalent obsession with the violence and gore of war. Heads explode, mushy bodies are run over by the tank, and limbs are lost. It’s nothing audiences haven’t seen in Spielberg’s influential war film, but it feels embellished by Ayer for the sake of excitement and, daresay, entertainment value. Pitt and Lerman give fine performances, and the supporting cast fills their roles serviceably, but these tired soldier stereotypes barely resonate outside of the basic, duty-bound Americans who fought and died in WWII movies for decades. Fortunately, Fury looks fantastic. Ayer shot on 35mm film stock instead of the now-industry-standard digital, and the visible grain and textures add to the old-fashioned, yet realistic visual presentation. Ultimately, though, Ayer’s treatment seems to acknowledge wartime atrocity almost as an obligatory afterthought, whereas the tank, gunfire, and bloodshed receive his full attention. In the end, the experience is empty and leaves us wondering what it’s all about.