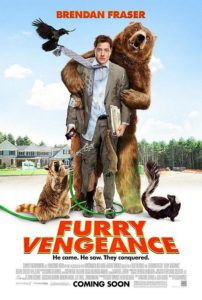 An eco-friendly family comedy, Furry Vengeance contains very little viable information about nature, proves inappropriate for younger viewers, and generates almost no laughs. With its base humor and mean-spirit, it seems more appropriate for a corny made-for-TV cable television station. Being about forest creatures that rebel against human developers, the movie renders absurd computer animated animals, anthropomorphized by effects that appear to be purchased with a coupon. But the human characters are no more tangible than cartoons themselves, thanks to annoyingly over-the-top performances by stars Brendan Fraser and Ken Jeong.

Fraser plays Dan Sanders, a nice-guy developer hired to build a “green” suburbia in the middle of a Pacific Northwest nature preserve. His disapproving wife Tammy (Brooke Shields) and teen son Tyler (Matt Prokop) frown upon his company’s hypocritical development plans, spearheaded by Dan’s money-grubbing boss (Jeong, whose humiliating performance lampoons his own race). What Dan doesn’t know is that animals in that area have been protecting their land for centuries, and they have targeted him as their enemy. He’s harassed to no end by squirrels, possums, various birds, foxes, skunks, and their gang leader: a wily raccoon. Some are real animals, others poorly animated, others animatronic, but they’re all given CGI mouths that utter reactions like “uh-oh” and “ha-ha” when the time calls for it. The only way it could’ve been worse is if they talked. (But if you stick around during the credits, they will talk, and dance.)

In its display of Fraser being defiled by badly animated animals, the movie dares to ask how much potty humor one audience can take. Families that see this together will look at each other in curiosity, wondering why the filmmakers opted to use Fraser as a human toilet. A raccoon urinates on Fraser’s head. Birds swoop down like bomber planes and unload white droppings on human targets below. Fraser takes several skunk sprays directly in the face while screaming, “Give it to me! I love it!” with mad rage. A bear chases his character inside a portable toilet, which is then spun about to leave him soaked in feces, urine, and blue sewage chemicals. And yet, surprisingly, the movie offers no fart jokes. Perhaps that would’ve been crossing a line.

Fraser is also stung by a swarm of bees, chased by an African Condor, thrown off a cliff, bitten in the groin by a raccoon, and forced to wear women’s pajamas with “Yum Yum” written on the bottoms. He takes so much abuse in this movie, it’s sad to think that the greatest punishment of all will be the permanent place of Furry Vengeance on his resume. Fraser has done some bad movies over the years, some really, really bad movies. Remember Dudley Do-Right, George of the Jungle, or Monkeybone? No? Too old for you? How about something more recent like Inkheart or Journey to the Center of the Earth? Whenever Hollywood needs a goofy dolt, they call upon Fraser and he fills the role with incredible precision. But he’s starting to get older, quite visibly, and it’s time for him to move on from playing the wacky idiot. If only he pursued more roles like the ones he gave in Gods and Monsters or The Quiet American.

Worst of all, the movie’s otherwise admirable pro-environment message is completely lost in the lousy writing and tasteless humor. But Roger Kumble, director of Cruel Intentions, made sure to include several references to the Nintendo Wii—shoved in our face, the filmmakers don’t even try to hide the shameless product placement. Adult audiences will be reviled by the stupidity of it all, on par with that of Evan Almighty. Children might find some joy in the Tom & Jerry-esque violence, but they’re better off playing with lawn darts than watching this dribble. As one of the worst movies this critic has ever had to endure, zero stars hardly seems like it captures how bad this movie really is. If there were a black hole award, Furry Vengeance would receive it.