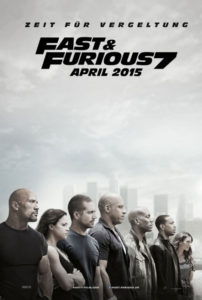 Something about the Fast/Furious series awakens my inner feminist. Each entry thus far has relegated women to one of three roles: sex object, homemaker, or butch brute. The latest movie, Furious 7, is no exception. Within the first ten minutes alone, countless young women are objectified before the camera. Barely dressed, they bend over cars and present their hindquarters for the camera, or they spray each other with hoses in a car wash water fight that plays like a softcore tease. Shot like a music video, the camera trails behind scantily clad babes or pauses with a pair of breasts framed in the foreground, while the action takes place in the background. The movie even manages to turn its resident female computer hacker (Nathalie Emmanuel) into a sex object. Or take how Jordana Brewster’s character remains at home watching over her child, her dialogue reduced to concerned wife lines. And then there’s Michelle Rogriguez’s sexy badass, who epitomizes the tough-girl persona; here, she goes a few rounds with MMA fighter Ronda Rousey. Then again, none of these women are fawned over as much as the movie’s inventory of supped-up automobiles, which are filmed like erotic pinup models, making the women onscreen superfluous.

But rather than dwell on the limited roles for women in Furious 7, let’s look at how this Universal Pictures franchise treats men, all of whom are one-note constructions. Characters like Vin Diesel’s Dominic Toretto and Dwayne Johnson’s Agent Hobbs look so beefed up that their steroid pushers can now probably afford to take a vacation, at least until Part 8 comes along. Meanwhile, Paul Walker’s Brian O’Conner, the FBI-agent-turned-crook-turned-dad, tries to do “the father thing” but admits he really “misses the bullets.” If not for Roman (Tyrese Gibson) and Tej (Chris “Ludacris” Bridges), the respective comic relief and brains of their operation, the degree of manliness onscreen might be enough to give male viewers some serious inadequacy issues. Worse, if you put them all together, you might have a two-dimensional character. At least they each stick to their guiding principle: family is everything. So they shouldn’t be surprised when Deckard Shaw (Jason Statham) wages war on their makeshift family to avenge his brother, Owen (Luke Evan), who Dom and crew took down in Fast & Furious 6.

Another franchise standard is convoluted plotting, and Furious 7 has that in abundance. When Deckard vows to wipe out Dom’s crew, Dom is approached by a mysterious man-in-black named Mr. Nobody (Kurt Russell, who has more personality in his pinky than the rest of the cast in their entirety). Full of swagger and charm, Mr. Nobody offers Dom a deal: If he can rescue the aforementioned hacker, named Ramsey, and recover her all-seeing “God’s Eye” surveillance device to prevent it from getting into terrorist hands, then Dom can use the device to find and stop Shaw. (Nevermind why Mr. Nobody thinks Dom’s band of monosyllabic gearheads is more capable than his own black ops outfit.) This mission takes them from Los Angeles to the Caucasus Mountains to Abu Dhabi for one reason or another, and none of the reasons are well justified by series writer Chris Morgan’s script, which perpetuates yet another series characteristic: its shamelessly stupid dialogue. An actor of Russell’s caliber can put character behind almost any line; the usual Fast/Furious cast members aren’t so gifted. Though he’s far too talented to be involved, Russell makes the most of his appearance and renders much of the movie watchable.

Of course, it wouldn’t be a Fast/Furious movie without physics-defying stunts. Cars drop out of a cargo plane and, thanks to parachutes, land ever so precisely on a narrow stretch of mountain road. Brian leaps from a bus as it topples over a cliff, and he somehow saves himself by grabbing the tailfin of a drifting racecar. Dom drives a supercharged car from inside and atop one of Abu Dhabi’s Etihad Towers into the adjacent building, and then does it again. As you can imagine, most of this is realized through CGI. What’s more, each sequence features a combination of slow-motion and accelerated footage, as if the four credited editors each had their own ideas about the speed at which they should present the movie; and instead of picking one, they compromised and divided evenly. Elsewhere, relatively convincing CGI animates the late Paul Walker’s face into scenes using a combination of outtakes and old footage, and then applies it onto the faces of stuntmen and Walker’s brother, although at times, the overlay effect is quite obvious.

Walker, who died tragically in a November 2013 car accident in the midst of production on Furious 7, at least receives a heartfelt sendoff. When production halted, the filmmakers had to pause and consider how to proceed. Much of Morgan’s script was retailored after Walker’s death, allowing the production to pay homage to Walker’s nearly fifteen-year franchise contribution with a proper goodbye. Killing off Brian O’Conner may have been tasteless (not that any Fast/Furious movie has ever been concerned with taste; see paragraph 1) or too much like art imitating life. A number of narrow escapes leave us wondering if this or that close-call will result in the character’s death, which is a somewhat morbid response, to be sure. The movie (intentionally, and if so shamefully?) manipulates this suspense by how we anticipate his character’s demise because of Walker’s death. Fortunately for fans, the movie’s finale keeps with the spirit of the corny, melodramatic pulse coursing through the last few sequels.

Curiously, horror maestro James Wan (Saw, Insidious) takes over directing duties from series regular Justin Lin (who directed parts 3-6), but Wan’s admirable and growing style has been eradicated by his immersion into motorbrained action. A soundtrack of thumpin’ pop music, choppy editing customary to such action fare, and music video stylization take over in place of Wan’s seemly personal style demonstrated on The Conjuring, proving here he’s a studio director-for-hire. As if we’re being spoon-fed another helping of the same slop, Wan delivers a loud, silly, muscle-car-of-a-sequel that will please its built-in audience and earn millions at the box office. Your brain cells will be pummeled into submission over the course of an overlong two-hours-and-seventeen-minutes; your tolerance for subpar acting will be tested, and then some; but those in the mood for such diversions will be delighted. This critic has never been in the mood for a characteristic Fast/Furious movie—filled with the limited roles for women, beefy roles for men, auto-erotica, gravity-resistant stunts, cheesy dialogue, and melodrama galore described above—and probably never will be.