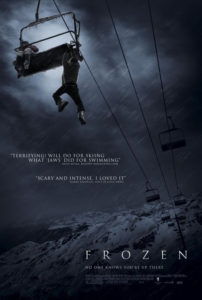 In reviewing Frozen, I have to be careful, because I want you to have the same experience that I had when you see this movie. Prior to attending the screening, I consciously avoided reviews and watching trailers, since I thought the movie’s simple premise might be ruined by too much information. I was right. So I have to write this review without spoiling any important details for you, but I also must make you excited enough to seek the movie out. And since it’s in limited distribution, being a Sundance indie that was picked up by Anchor Bay Films, undeniably you will have to seek this one out. But rest assured, you can read this review and still see the movie for the same experience that I had.

The story involves three twentysomething skiers (played by Emma Bell, Shawn Ashmore, and Kevin Zegers) left on a ski lift at night, accidentally abandoned by the ski resort’s staff. Nothing malicious is behind their being stranded; it’s just one of those things. The lift has stopped moving. The lights around them shut down. They sit in the darkness, their dangling feet attached to their respective skis and snowboards, crying out for help. But they’re halfway up a mountain and no one can hear them. Furthermore, it’s Sunday and the resort doesn’t open again until the coming Friday. The stranded three must contend not only with the general cold, but the progressively more dire conditions as a snowstorm approaches. Not to mention some unforeseen nuisances. Trapped forty feet above the ground with no way down, they brainstorm a way out of their predicament.

Their options are jumping off the lift or climbing across the lift wire to a support pole, on which there’s a ladder that they can climb down to ostensible safety. Jumping seems plausible, but there’s bound to be some bones broken in the process, even if the falling snow would help ease the fall. Climbing across the wire is more difficult: it’s razor sharp, enough to cut through even thick winter gloves. The script considers nearly every possibility. The only quibble I have with the material is that no one thinks to use a ski pole or their belt to slide down the wire. Alas, you can’t think of everything, especially not in an indie horror movie.

Writer-director Adam Green, whose evident talent here is wasted on slasher schlock like Hatchet and its upcoming sequel, builds the tension with incredible control. He spends plenty of time developing his three characters before they get themselves trapped on the lift. Each one feels three-dimensional and relatable, so when they’re eventually freezing to death with no escape in sight, they’re able to keep the movie progressing forward through their funny and sad conversations. But there’s also some gruesome turns that send the audience writhing in their seats, from predictable troubles with skin-pealing frostbite, to less obvious threats.

Don’t watch the trailers that reveal entirely too much. Don’t read anything about the movie. Just see it. The premise of the movie is deceptively simple, and the advertisements spoil that. You may read the above description and question how they could make an entertaining feature about this scenario. I can only say that they do, and they do it wonderfully. This isn’t a movie that will grab a mass audience like Paranormal Activity did. Nor will it redefine what horror movies are all about. The movie does what it does expertly, but it won’t become a cultural phenomenon. It might even be best for home video viewing. Very cleanly, it builds a scary situation and twists it into something increasingly horrifying. It will make you squirm in your seat and cover your mouth in terror and anticipation. Afterward, you’ll leave satisfied and impressed with how well it was made. How many recent horror movies can you say that about?