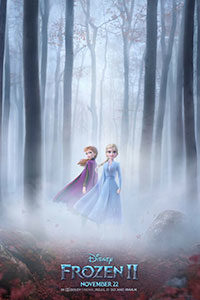 Frozen II was inevitable. The top earner of 2013, Frozen took in more than a billion dollars in box-office receipts for Disney. More importantly, it made children the world over become would-be divas, performing their very own versions of “Let It Go” for the camera. An unquestionable phenomenon, the movie reformatted the typical Disney princess away from a damsel who requires a handsome prince to save the day; rather, it boasted welcome themes of sisterhood and solidarity among women. Frozen II also deviates from the standard path, supplying a sequel that does not merely replicate its predecessor. It resolves to add dimension to its characters and expand on the world created in the original, instilling themes about death and positing that, even in a fairy tale, there’s no such thing as happily ever after. But just when you think Frozen II shows signs of doing something bold or confronting, it pulls back to a commercial safe zone, supplying Disney with an excuse to further their empire with future sequels and a reliable franchise.

The movie opens with an elaborate flashback of Anna and Elsa as children, listening to their father, King Agnarr of Arendelle (Alfred Molina), tell a bedtime story about his past. In a flashback-within-a-flashback, he recounts how the sisters’ grandfather, King Runeard (Jeremy Sisto), attempted to make peace between Arendelle and the enchanted nature people of the forest. The attempt at peace led to violence, and the forest has been shrouded in a cursed mist ever since. After several minutes of exposition, the audience has been presented with questions: Why did the forest people attack Arendelle’s welcoming committee, especially after King Runeard built them a massive dam as a peace offering? Why have the elemental spirits of the forest stopped appearing? Will the forest ever be released from its shroud? These questions of the past come to the fore when the present-day Queen Elsa (Idina Menzel), still feeling like an outcast despite her place on the throne, begins hearing the siren call of a fifth element—a mystical being that controls earth, wind, fire, and water. (Hint: It’s not Milla Jovovich.)

After the slow start, Frozen II starts to pick up as Queen Elsa heads up the mountain in search of answers, while her sister Anna (Kristen Bell) and friends have their own subplots. Anna’s boyfriend Kristoff (Jonathan Groff), the goof who talks to and for his pet reindeer Sven, works up the courage to propose (to Anna, not Sven). Olaf (Josh Gad), the living snowman, wrestles with mortality and the succinctness of life, offering some amusing asides that feed the movie’s noncommittal themes. Still, the sequel is a somewhat better movie than the original for its willingness to alter Frozen’s mythology. By the end, everyone has changed by way of predictable twists involving Elsa’s true identity, the sisters’ parentage, and the crimes of their grandfather. The outcome may soon resonate with children who will gradually come to realize the extent to which previous generations screwed things up with their ignorance toward climate change and racial intolerance. 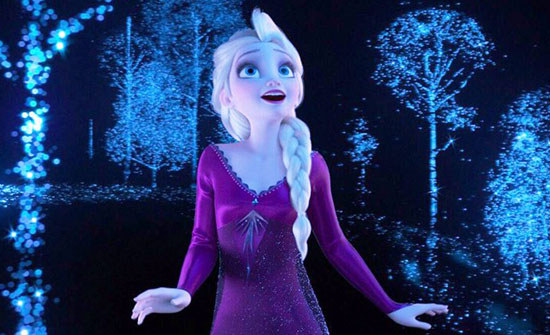 Of course, none of these weighty issues will matter to the younger viewers more attuned to the music and pretty pictures. The songs by Robert Lopez and Kristen Anderson-Lopez disappoint, but that’s coming from a critic who didn’t think the music from Frozen was all that memorable. The songs have been carefully distributed among the characters in the same proportions as the first movie, with Elsa getting more than the others. Olaf has another goofy song bound to make you laugh. Kristoff sings an ‘80s-style love ballad that sounds suspiciously like something from REO Speedwagon or Journey. And Elsa’s songs once more engage in Broadway-style bellowing that rarely advances the plot. Worse, the lyrics in each song serve to articulate a feeling already stated in the dialogue, leaving the musical sequences to feel emotionally redundant despite their bigness. There’s no clear standout in the bunch, no obvious “Let It Go” for this sequel, even though the filmmakers evidently feel “Into the Unknown” and its end credits reprise will be the one that children will be singing afterward.

Frozen II also repeats the visual mistakes of its predecessor. Though its use of color and rendering of natural scenes look incredible, the character designs still resemble plastic toys, as if the animators followed specifications supplied by Disney’s merchandising division. Elsa and Anna have a doll-come-to-life quality, while the rock gnomes appear to be the ancient cousin of the Troll Doll. The characters look so generic that they feel incongruous next to the photorealistic animation of autumnal forests or the wowing dam-bursting sequence. But the movie is rarely more beautiful than its sometimes surreal scenes of magic and glimmering snowflake imagery. A sequence in which Elsa attempts to extinguish a pink and blue living flame with bursts of ice manages to enchant the eyes. When Anna is chased through fall woodlands by three towering rock monsters, it’s distractingly gorgeous. And in another flashback, the impressive living ice sculptures manage to draw our attention away from the necessity of the scene as a plot device.

With a screenplay by returning scribe Jennifer Lee, who co-directed alongside Chris Buck, Frozen II initiates a thematic arc but does not follow it through to a natural conclusion. The story, conceived by Lee and four other contributors, deals with dark ideas: the reality that living things grow old and die; the illusion that adults have it figured out; our capacity to mythologize the past; the need to atone for past crimes; and the eventuality that, over time, nothing remains the same. Olaf’s existential angst about mortality finds him welcoming the ironic notion that “when you’re older, absolutely everything makes sense.” Of course, nothing in the world today makes sense unless you’re a character in a storybook. To explore these themes, Frozen II seems to want to tear down the past and rebuild, but at the last moment, the movie hesitates and instead delivers a saccharine conclusion. The waterlogged climax should have led to the destruction of Arendelle, which would symbolically echo the two (impermanent) deaths in the story; but alas, everything turns out just fine. After all, it’s a Disney fairy tale, not something by the Brothers Grimm or Hans Christian Andersen.

In any case, if the litmus test for an animated movie is the degree to which both children and adults sit in engaged silence, then Frozen II gets half credit. In my sold-out screening packed mostly with mothers and their little girls dressed as small ice princesses, the children were quiet and absorbed. The adults, on the other hand, chatted away as if the movie playdate were an excuse to gab with fellow parents. Indeed, my mind began to wander during Frozen II. I found myself thinking about the animation and the degree to which the themes had been woven into the plot, and later, how they started to unravel. It’s difficult to feel rapt by a story devoid of surprises, essential songs, or a sense of urgency. Instead, the movie feels comprised of disparate components workshopped by a committee of writers determined to satisfy everyone, thus astound no one. Worst of all, the kernel of a good idea resides somewhere inside this Disney sequel, but the studio didn’t have the guts to try something even moderately daring and risk the product’s commercial potential.