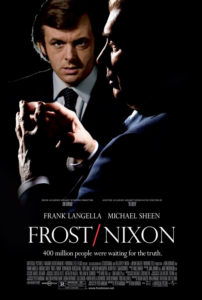 Based on the play by Peter Morgan, Frost/Nixon dramatizes the 1977 televised interviews that took place between British talk show host David Frost and former president Richard Nixon three years after his resignation. Ron Howard brings the story to the screen with an involving, almost docudrama style, complete with interview-like confessionals from key players not named in the title. And while the film does little more than dramatize a major political event that’s already been well recorded into the annals of history, the result surprises in its ability to suspend the audience by presenting the interview as a sensationalized boxing match.

Nixon (Frank Langella) has just resigned into scandal and television personality David Frost (Michael Sheen), then working on a failed Australian program, seizes an unlikely opportunity and proposes a series of exclusive interviews to Nixon’s people. His motivations are rooted in personal gain, and his successes a matter of sheer luck. Offering $200,000 out of his own pocket, and much more from friends and investors, Frost buys a desperate Nixon clan obsessed with dollars and cents, stretching himself thin financially. Networks don’t believe in the project, specifically Frost’s role in it, so he buys his own airtime with money he doesn’t have. All this talk of money and networks leads up to the main event.

Though he already directed a boxing movie, namely Cinderella Man in 2005, Howard sets up the interviews like a title bout fought with words and conversational strategy, Nixon clearly the more experienced adversary. Frost asks his questions at first like a sensationalized talk show host in way over his head and unable to break in, allowing Nixon to droll on with 20-minute answers, eating away at the contractually-negotiated interview time. Each man returns to his corner during a break, their team of coaches barking the next line of attack.

Frost has three hired guns, researchers and Nixon scholars: James Reston, Jr. (Sam Rockwell) has written several books on the corruption of the Nixon regime; Bob Zelnick (Oliver Platt) is a Washington-based political reporter; and John Birt (Matthew Macfadyen) is an experienced television producer. Nixon, however, has people who’ve worked with him all throughout his political career, like Jack Brennan (Kevin Bacon), an ever-supportive voice in the former president’s ear. Nixon’s people are more personally invested, but Frost’s have a passion for bringing down the president that “slipped out the back door.”

When the bell rings, the match begins again. Frost nervously sits, probing with too much glamorous polish, while Nixon lawyers his way through questions, debating legal logic and attempting to apply his trademarked “tricky” charisma that no longer works. And after Nixon makes a drunken late night call to Frost, outlining that they both need a victory but “the limelight can only shine on one of us,” the battle rages with personal victories in sight for each man. Here we see Langella and Sheen glimmer with all the stuff great performances are made of. Langella has the voice and mannerism of Nixon down, evoking a desperate man needy of recognition and vindication, though somehow pathetic, pitiable even, and certainly beaten in spirits. Sheen has a way of sinking into his chair, of making his role in Nixon’s admissions simply a string of convenient questioning. But as we’ve seen in The Queen, also written by Morgan, where Sheen so expertly played Tony Blair, his acting talents offer incredible range.

Directed rather plainly, Howard creates a believable 1970s environment, complete with grainy film stock and muted, inexpressive colors. His mise-en-scène is accurate, believable enough, and his quick camera turns resonant of Martin Scorsese. This is the kind of movie that gets nominated for awards, but truly, the awards belong to the actors—Langella above all, since this is one of the year’s best performances. He moves in Nixon’s stiff-neck motions and shakes his head until his jowls flap; his voice is dignified, his upper lip as moist as ever. It’s an uncanny portrayal, surpassing Anthony Hopkins’ portrayal in Oliver Stone’s 1995 biopic Nixon and even Philip Baker Hall’s standard set in Robert Altman’s Secret Honor.

Howard’s Frost/Nixon contains more thrills than any other film in his career, as the build up and delivery to the monumental interview, still the highest-rated in television history, has more potential for high drama than Backdraft or The Da Vinci Code or Ransom could ever hope for. The players are real and the admissions devastating, and though revelations are hardly possible, watching the duel of wills progress makes for a stirring experience, and an emotional one, as both men are revealed to contain more humanity that expected. Washing away any remnants that this was once a play with his skills behind the camera, Howard commands his best film to date.