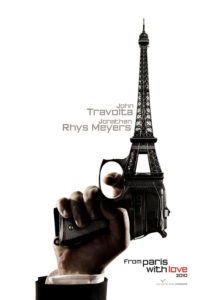 From Paris with Love is the kind of movie the advertisements call “an adrenaline-packed thrill-ride.” But then you watch the movie and realize that it recalls most action movies since the Schwarzenegger and Stallone days—the plot is thin, the volume is loud, and the body count is high. The story involves rookie special ops agent James Reece (Jonathan Rhys-Meyers), who doubles as the assistant to the American ambassador in Paris. For some reason, Reece is teamed with brash American agent Charlie Wax (John Travolta), and together they’re sent to clear a possible terrorist cell. The ultra-violent Wax takes Reece outside of his comfort zone, which causes some ruffles in Reece’s relationship with his fiancée, Caroline (Kasia Smutniak). There are some shrug-inducing twists in the plot, but the unrelenting action moves too fast for the audience to realize how predictable they are.

,In the realm of action movie heroes, Charlie Wax exists somewhere between James Bond and Rambo. He’s a killing machine with no tolerance for authority, and yet he’s got an arsenal of neat gizmos and satellite surveillance to assist him. Wax runs about the screen crowing about how cool it is to blow people away, how cocaine and prostitutes are benefits of the trade, and we’re supposed to believe he’s an incorrigible secret government agent. Right. For the role, the grossly miscast Travolta shaved his head and dyed his gray goatee black, and then he reflected on the most over-the-top performances in his career and multiplied them by a factor of ten. Travolta even makes a nod to his role in Pulp Fiction through Wax’s love of the French Quarter-Pounder, the “Royale with cheese.” But instead of reminding the audience of their fondness for the actor, it forces us to question: When was the last time Travolta appeared in a good movie? It’s been a while. A long while.

Balancing out this mismatched buddy movie is Rhys Meyers, whose character does little more than react to Wax’s testosterone-laden methods. Together they’re uneven, but not in that charming way that Mel Gibson and Danny Glover were in Lethal Weapon. These two are more like Tango & Cash—then again, that might be giving them too much credit. Rhys Meyers isn’t the action movie type, which is probably why he was cast. But this otherwise dramatic actor of Match Point and Showtime’s The Tudors fame doesn’t acclimate to his surroundings very well. For Rhys Meyers’ lack of presence, our attention is given to Travolta, and in these conditions that’s no consolation.

The most under-developed character, however, remains Paris. Why set a movie in the City of Lights if you aren’t going to exploit it for everything it’s worth? The movie could’ve been called “From Cleveland with Love” and no one would’ve known the difference. Perhaps the burden rests with the teaser poster, which shows us James Bond-esque romanticism in its imagery and title. No one’s asking for the Eiffel Tower to play a corny major role, but using the scenery beyond drab alleyways and putrid slums may have give the procession of violence more personality.

Since none of the characters are developed enough to care about them, we’re mostly watching for the action scenes. Pierre Morel, director of last year’s Taken, again helms a story by his producer Luc Besson. Once a director himself, Besson (The Fifth Element, The Professional) has built a small industry rooted mostly in action movies, some for American audiences, but most of them for his native France. Besson productions like District 13 and the Transporter franchise have helped establish up-and-coming action directors like Morel and Louis Leterrier (The Incredible Hulk). So the cartoonish action sequences are enjoyable, even intelligible, though too reliant on a shaky camera. Morel can do much better than this, which assigns the fault to the script. Then again, if you’re the right audience and in the mood for a popcorn-munching actioner, a script won’t matter.