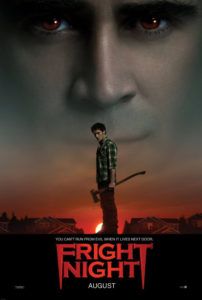 Dreamworks’ remake Fright Night has different goals than its 1985 source version, to the extent that fans of Tom Holland’s original may have trouble appreciating what an entertaining horror-comedy director Craig Gillespie (Lars and the Real Girl) has made. Though both follow a corresponding plotline where a teenager suspects his next-door neighbor is a vampire, the original celebrates horror movies themselves by delineating and reinforcing their tropes, while Gillespie’s take forgoes any satirical edge and instead resolves to supply a good time through pure shocks and laughs. Its objectives may be less ambitious, but the outcome, populated by an impressive cast of likable performers, delivers vampire fun with more bite than your average Twilight movie.

The screenplay by Marti Noxon (I Am Number Four) elaborates on the protagonist’s “complex” teenage personal life, so modern youths can relate. Here, Charley Brewster (Anton Yelchin) lives in a Nevada desert suburb of Las Vegas with his single mother (Toni Collete), and has recently upgraded his social status from nerd to one of the popular crowd thanks to his trendy new girlfriend, Amy (Imogen Poots). His step up on the social ladder has left his former best friend, “Evil” Ed (Christopher Mintz-Plasse), behind and none-too-happy about being abandoned. But when Ed attempts to warn Charlie that the Brewster household’s new neighbor, Jerry Dandrige (Colin Farrell), is a vampire, Charlie doesn’t listen. It’s not long before Ed goes missing and Charley begins to worry. Only after witnessing Jerry’s bloodsucking first-hand does Charley begin to understand Ed was serious and regret his behavior. And so, Charley goes to the only person who might believe him, occult huckster Peter Vincent (David Tennant, of Dr. Who fame), whose smoke-and-mirrors routine gives way to a drunken coward in need of liquid courage before he helps Charley fight vampires.

Judging the movie as a remake, the key component lost in translation is an evident affection for horror movies as a tradition reinforced within. In the original Fight Night, Charley Brewster always has some schlocky vampire flick blaring on his TV in the background—all episodes of the horror telecast “Fright Night”, hosted by Roddy MacDowall’s Peter Vincent, who helps him kill the villainous vamp next door. As a result, both the original Charley and Vincent are confronted by the veracity of horror movies, which, as it turns out, were “for real”. But, as such horror telecasts fell out of favor some years ago with the disbanding of Elvira, USA Up All Night, and Joe Bob’s Drive-In Theater (although, Elvira has newly returned to the late-night horror scene), the remake’s filmmakers no doubt felt incorporating a horror show host would be a detail lost on today’s youths. Unfortunately, it also means the movie loses the original’s ironic life-imitating-art humor, which was perhaps its wittiest quality.

Instead, the remake’s Peter Vincent is a Goth-decorated magician with a show in Las Vegas, the concept of which still eludes me. Anyway, the movie tells us he’s a vampire expert, so we accept that. Likewise, Charley Brewster’s friend-turned-vamp “Evil” Ed is played by McLovin from Superbad, the least menacing actor ever born. Riddled with oddity, Stephen Geoffreys was the original “Evil” Ed, and his eccentricities on and offscreen make that character funny and uncomfortable and unsettling all at once. Here, Mintz-Plasse is just McLovin with fangs, his character played for pathetic humor more than genuine scares. Overall, the remake contains more scares and broad laughs than genre irony fuelled by the original’s boy-who-cried-wolf scenario, largely due to Charley Brewster being changed from an all-out nerd to the story’s resident skeptic. And just when we’re beginning to feel sour about the remake’s “updates” on the 1985 version, the original Jerry Dandrige, actor Chris Sarandon, appears in a cameo to twist the blade and remind us how superior that film remains.

But one cannot dwell on a remake’s inability to live up to its original forever. In all legitimacy, Gillespie’s version is quite entertaining, thanks in part to the quality actors assembled in his cast. Yelchin improves the Charley Brewster role over the original’s William Ragsdale, as Yelchin is simply capable of much more as an actor; he goes from his teenage sensibility of Charlie Bartlett to the gun-toting hero from Terminator: Salvation here, and remains believable throughout the character’s changes. Tennant may not top Roddy McDowall, but his superstar diva shtick provides the heartiest helpings of comic relief, especially in the dire finale when the movie needs it most. And Farrell plays his Dandrige with a menacing calmness spiked by funny and freaky “Hey guy…” greetings that give way to savage violence. He heightens the sense of danger on the whole, making Jerry Dandrige much scarier than the original’s—he earns it when one character describes him as the Jaws of vampires

Which leads me to another of the movie’s unfortunate qualities: The special-effects. Granted, the original’s practical effects were conceived in the prime of 1980s makeup designs and would be impossible to top from an aesthetic standpoint, but the CGI here looks just-plain-silly. Vampire mouths are augmented and stretched out, recalling transformations from Van Helsing of all places (for shame). CGI blood squirts here and there. And it all looks worse than it should because Dreamworks opted to distribute the release in 3-D. While theatergoers will have the option of 2-D screenings, my prescreening was unfortunately in 3-D. It seems some filmmakers haven’t learned a 3-D film’s color palette needs to compensate in brightness for the device’s darkening effect, and Fright Night is a very dark movie, so dark that audiences who choose the 3-D option will struggle to make out the many night scenes. I’m already anticipating a Blu-ray home viewing for a much more visible experience.

This is a very Hollywoodized rendition of a cult-classic, and it feels that way throughout. There may not be much winking at horror-savvy viewers, but there’s a crowd-pleasing approach that will appeal to modern viewers, complete with pop-culture references in the Twilight realm designed for mass consumption. A successful horror-comedy knows when to scare you and when to ease your fears with humor, and Gillespie effectively blends shocks and laughs, providing that rollercoaster-ride of emotions that comes with the territory. As I’m sure you’ve noticed, this review may contain a great deal of griping about the ways in which the remake doesn’t follow the original, but nevertheless, I enjoyed myself with the new Fright Night. Truth be told, I would have enjoyed myself more if there wasn’t an original movie against which this one could be compared, so fresh audiences are bound to have a great time, even if the rest of us would rather revisit the original at home.