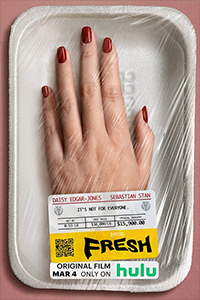 Fresh skewers the modern dating scene. In the first sequence, Noa, played with lovelorn cynicism by Daisy Edgar-Jones, endures a dating app dinner with a toxic dope (Brett Dier). Within minutes, he offers Noa a backhanded compliment and plunders her leftovers for himself. When she explains that the first date didn’t really work for her, he calls her a “stuck-up bitch.” End of evening. If this seems like the date from hell, just wait. The directorial debut of Mimi Cave has worse—much worse—in store for Noa, a Portlandian who hates dating. What works so well about this darkly comic material, written by Lauryn Kahn, best known for her work on various Adam McKay projects, is that we cannot possibly predict where it’s going. It’s one of those movies that relies on catching the viewer unaware, thus a trailer or review—even a poster—could give too much away and lessen your experience. So consider yourself warned that I plan to discuss the movie in detail.

For the first half-hour of Fresh, the logline might read something like, “Hopeless single finally finds Mr. Right.” In a grocery store of all places, Noa meets Steve (Sebastian Stan), a charming doctor on his way to visit his niece. Within a few seconds, he makes Noa laugh and appears casually confident when asking for her number. He also seems genuine, so they exchange information. When Noa tells her best friend, Mollie (Jojo T. Gibbs), about the encounter, Mollie notes some reservations, such as his lack of a social profile. What does Noa really know about this guy, after all? We feel those reservations, too, except he’s so darn cute and charismatic. And with a “Go for it” attitude, Noa rushes into bed with Steve. Things move fast, but the undeniable sparks between them distract from the warning signs. So when Steve proposes a weekend at a Cottage Grove getaway for their third date, Noa feels strangely optimistic. She feels less so after Steve drugs her.

By the time the opening titles finally appear 30 minutes in, Cave has effectively placed us into the subjectivity of women just looking for a human connection only to be greeted with twisted, predatory behavior. Steve (if that’s his real name) runs a messed-up operation of meat trafficking—he kidnaps unsuspecting women, butchers them, and sells their meat to “the one percent of the one percent.” All at once, Steve becomes a cartoonish, gleefully evil cannibal who trims a victim’s leg while dancing around his secluded serial killer pad to 1985’s “Obsession” by Animotion (“I will have you, yes I will have you… Like a butterfly, I will collect you”). The soundtrack is full of pointed and ironic pop tunes, which helps turn Fresh into a grim and sardonic horror film for those with a nasty sense of humor. Subtle it is not.

Stan’s ladykiller performance is wild and effective. Part of the movie’s macabre joy is watching Stan work, clearly elated with his chummy sociopath who just wants to be understood by his victims. Edgar-Jones, too, does much with her kidnappee role. Noa tries to convince Steve that she’s interested in his scheme, even in tasting human flesh to complete the act. Scenes where Noa humors Steve function on multiple levels—they’re terrifying for the reality of the situation, full of suspense as Noa navigates her way through its dangers, and oddly funny. Playing the part, Noa cracks grim jokes about “breast meat,” almost convincing us that she’s fallen for the allure of flesh—as others have. Indeed, there’s a hint of Ravenous (1999) in these proceedings, where once you’ve consumed human flesh, the taste hooks you.

On the periphery, Mollie uses the power of Google to track her missing friend. But for all of her (correct) suspicions about Steve, she makes every excuse not to call the authorities. Fresh becomes the kind of movie where friends like Mollie make bad decisions, prompting you to shout “Don’t go in there!” and “Watch out behind you!” at the screen. Fortunately, after debuting at Sundance this year, Searchlight Pictures bowed the movie on Hulu, not in theaters. So you’re less apt to annoy others when you vocalize your frustration. However, that kind of engagement is a testament to Cave’s confident direction, and our investment in the material. It doesn’t hurt that Pawel Pogorzelski, who delivered some pristine cinematography for Ari Aster’s Hereditary (2018) and Midsommar (2019), works with production designer Jennifer Morden to create artfully lit and creepily clean interiors, giving every scene an off-kilter quality.

Although occasionally predictable and never approaching nuanced apart from Edgar-Jones’ internal performance, Fresh belongs on a list of horror films such as Teeth (2008), Raw (2016), or Prevenge (2016) that paint the female experience using bloody horror as the paintbrush. Cave and Kahn explore the inherent dangers of dating apps from their hollow, transactional quality to their predatory potential. The filmmakers also poke fun at the self-interested male trope with the three men in the movie—including Mollie’s former hookup, played by Dayo Okeniyi, who initially comes to the rescue only to chicken out—each of whom proves woefully disappointing as a human being. Women have only themselves to rely on this scary world, the movie seems to say. Anchored by two memorable performances and plenty of twists along the way, Fresh is grotesque fun and late-night fare for those intrigued by the concept: a cannibal-infused sendup of app dating.

(Note: This review was originally suggested and posted to Patreon on March 10, 2022.)