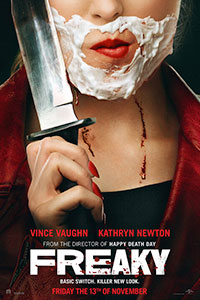 In Freaky, Blumhouse once again creates moviegoer catnip by adding a horror twist to an established, pointedly non-horror genre. With Happy Death Day (2017), the company folded a slasher into the same-day-on-repeat scenario of Groundhog Day (1993), resulting in one of their biggest hits. Freaky takes a similar approach and turns the classic body-swap scenario of Freaky Friday (1976, or 2003 if you’re a millennial) into a comical gorefest. When a serial killer called the “Blissfield Butcher” (Vince Vaughn) switches bodies with his latest would-be victim, high school outsider Millie (Kathryn Newton), the result allows for scene after scene of physical humor and over-the-top kills. Although it’s often quite broad, the inspired performances by the two leads, combined with the genuine fun everyone behind and in front of the camera seems to be having, prove contagious.

After a ruthless opening sequence that establishes the Butcher’s capacity for violence, Freaky finds him wielding a cursed Mayan dagger—a goofy-looking toy store prop—which temporarily swaps the souls of the stabber and stabbed for 24 hours, at which point the change becomes permanent. When the Butcher targets Millie but doesn’t complete the kill, their souls switch bodies the next morning. Suddenly, Newton has to play a lumbering Millie-Butcher, and Vaughn reveals his feminine side as Butcher-Millie. Millie-Butcher now has access to the high school and a limitless supply of teenage victims; Butcher-Millie can’t walk down the street without people screaming. Needless to say, when she reaches out to her best friends Nyla (Celeste O’Connor) and Josh (Misha Osherovich)—who are Black and gay, respectively, and well aware of their status as ground meat in a conventional horror movie—it takes Butcher-Millie some time to convince them she’s not a psychopath. Alas, neither her friends nor the screenwriters could find a better way to hide Butcher-Millie during daytime scenes than behind a rubber Halloween mask, which is only slightly less conspicuous than the face of a wanted man.

Director Christopher Landon co-wrote the screenplay with Michael Kennedy, turning their genre pastiche into a reference machine with nods to classic horror movies. Sometimes, these are subtle winks, such as a head tilt that recalls Halloween (1978) or a camera angle that recalls The Shining (1980). What the characters don’t do, refreshingly, is talk ad nauseam about horror or body-swap comedies with a postmodern knowingness à la Scream (1996). But this also means that the characters tend to make dumb horror movie mistakes, which Landon treats without irony or self-awareness. Future victims wander dark basements and empty school bathrooms, exploring strange sounds; they predictably meet their demise, although the deaths have been amplified for an intentionally funny shock.

Freaky aims more for laughs than scares, similar to Landon’s last two features, Happy Death Day and its 2019 sequel, or his Scouts Guide to the Zombie Apocalypse (2015). But that doesn’t mean the Butcher’s kills are any less graphic. Rather, Landon turns up the gore to camp effect, titillating horror aficionados with his use of outrageous deaths and practical make-up, as the Butcher makes gristly weapons out of a tennis racket and wine bottle. And when the mean-spirited shop teacher (Alan Ruck), who singles out Millie to inappropriate extremes, tries the same thing with the Millie-Butcher, the educator receives his comeuppance when he’s split in half on a table saw. Another of Millie’s tormentors, Ryler (Melissa Collazo), ends up in a cryotherapy freezer, only to be shattered in the same manner of Simon Phoenix.

What the movie does well is engage a horror-savvy viewer with its playful understanding of genre, making the experience like a game to see how Landon and company will turn certain tropes or references into a joke between the filmmaker and audience. For instance, the movie opens with titles that declare “Wednesday the 11th” in the same font and color scheme as the Jason Voorhees franchise. It shouldn’t come as any surprise that most of the action goes down on Friday the 13th (an on-the-nose alternate title: Freaky Friday the 13th). But with Landon’s interest in turning genres on their head, he leaves little room for any genuine emotional connection to the characters. The scene where Butcher-Miller uses her new identity to connect with Millie’s widowed mom (Katie Finneran) never lands the emotional beat it should. Meanwhile, Newton never sells her misfit character; she’s far from the Carrie White type, as she easily slips into badass mode when Millie-Butcher dons a red leather jacket.

One of Freaky’s more inspired, albeit somewhat underdeveloped strains involves each character experiencing something new in a different gender and size. Millie realizes how empowered she feels in a man’s body. Vaughn, who’s 6’5” and hulking, towers over his teenage costars—and for once, the teens look like teens, not thirtysomethings playing high-schoolers. Butcher-Millie breaks through walls and picks up her former bullies to hilarious effect, making quick work of the opposition. Though, she can’t run as fast as she used to in Vaughn’s body. And soon she realizes, “Having balls sucks.” There’s also an inspired bit of awkwardness when Millie’s crush (Uriah Shelton), having realized that she’s trapped in the Butcher’s body, nonetheless makes a move. What’s less developed is how the Butcher feels in Millie’s body. Millie feels stronger within the Butcher’s muscular frame and finds having a penis to be strange, but how does the Butcher feel in a young woman’s body?

Much of the heavy lifting falls on Vaughn, who’s no stranger to playing murderers (see Clay Pigeons or the shot-for-shot remake of Psycho, both from 1998). Newton does what she can once she’s saddled with a one-note maniac character, though she’s got the killer stare down pat. But the MVP here is cinematographer Laurie Rose, who gives Freaky its sharp personality, lighting moody slasher scenes that embrace darkness without proving inscrutable. Rose, too, captures multiple genres in her shifting style that, miraculously, never feels like a patchwork; rather, every scene feels part of a whole. Competently made and propelled by a breakneck pace, Landon delivers his best movie thus far by, in doing what Happy Death Day failed to, completely living up to the potential of his concept.