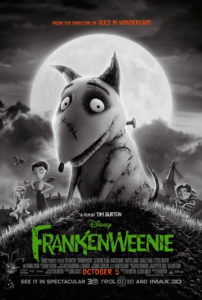 In remaking his own 1984 short film that helped launch his career, Tim Burton’s Frankenweenie updates his original from live-action to stop-motion animation, following his own such stylistic forays in The Nightmare Before Christmas (as producer and writer) and the disappointing Corpse Bride (as co-director). This distinct medium leaves the original’s darkly quaint Leave It to Beaver quality by the wayside to explore territory familiar to the filmmaker’s macabre comedic sensibilities, as well as exploit popular trends in 3-D exhibition. But the film may also be Burton’s most personal film in more than a decade, employing references to his favorite classic horror movies like Frankenstein and Bride of Frankenstein, while employing a black & white visual style reminiscent of his best film, the 1994 masterpiece Ed Wood. The lack of color alone suggests Burton has set aside his usual, increasingly cloying commercial drives to tell a story that means something to him.

Here’s a heartwarming story about a boy who loves his dog so much, not even death can keep them apart. The boy, appropriately named Victor Frankenstein (voiced by Charlie Tahan), witnesses his dog, named Sparky, killed while chasing a baseball across the street. Named after Burton’s own childhood pet, Sparky was Victor’s one true friend. And so Victor takes a cue from his maddened science teacher, Mr. Rzykruski (wonderfully voiced by Martin Landau), and plugs Sparky’s corpse up to electrodes and wires during a storm. When lightning strikes, Sparky is reborn. Keeping in mind this is a PG-rated film distributed by Disney, the film avoids depicting Sparky as a monstrous creature. Certainly he shows signs of Victor’s iffy patchwork and flies buzz about him, but Sparky is his same old self, running and frolicking with his master, the two once again in perfect harmony. Victor keeps Sparky a secret from his parents (voices of Martin Short and Catherine O’Hara), but eventually, the secret gets out, and the narrow-minded throng refuses to understand.

Much of the plot follows the broadstrokes of Burton’s original short, complete with a finale where the angry mob townspeople have a change of heart and resolve to jumpstart the undead pooch with their cars. But the middle section of the film is all new, augmented by John August, screenwriter of Burton’s Big Fish and Charlie and the Chocolate Factory. In the new version, Victor’s monstrous assortment of classmates steals his schematics to revive their own pets for an upcoming science fair. But none of them have the love that Victor has for Sparky, and so their experiments result in abominations. One chubby boy creates a gange of two-foot sea monkeys that behave like the creatures in Gremlins; an eyebrow-raising Asian stereotype restores his turtle’s life and it becomes the towering creature from Gamera; a little girl’s cat transforms into a feline-bat hybrid. All of this is just pointless diversion next to the simplicity of Burton’s short, but it’s rendered with enough sharp humor to keep moviegoers involved.

The film takes place in one of Burton’s typical suburban neighborhoods straight out of Edward Scissorhands apparently some decades ago (in the background, Bambi (1942) can be seen showing at the local movieplex). Except the characters in Frankenweenie’s town of New Holland all appear drained of blood, dark-eyed, and emaciated. It remains unclear why these characters all look like rejects from Halloween Town, apart from this being Burton’s style. But the morbid characterizations allow Burton to inject plenty of references to horror movies from yesteryear. Mr. Rzykruski resembles Burton’s beloved idol, actor Vincent Price; two of Victor’s classmates look like Igor and Boris Karloff’s mummy; Christopher Lee appears in a scene from a Hammer classic as Dracula. And then there is the climactic scene at the Dutch windmill, mirroring the finale of James Whale’s Frankenstein. These references are all lovingly made and haven’t been so prevalent in a Tim Burton film since Mars Attacks!, and his return to such nostalgic material is welcome.

Despite the inspired design behind the film, however, Frankenweenie suffers from a curious lack of interesting humans characters, while the lively animation behind Sparky is joyful and fun. In that regard, ParaNorman remains the better of the two stop-motion animated, macabre-themed family films of 2012. In Frankenweenie, a subplot about a dastardly mayor goes nowhere, while the mayor’s daughter Elsa Van Helsing (voice of Winona Ryder) might be a romantic interest for Victor, but she isn’t. Instead, we’re far more interested in the romance between Sparky and Elsa’s poodle, a puppified dead ringer for Elsa Lanchester. Minor nitpicks aside, the film’s expert animation and gorgeous monochrome presentation remind us why Burton, when he’s not making atrocities such as Alice in Wonderland or Dark Shadows, has a distinctive gothic passion. And though his more mainstream material may have made Tim Burton a household name, it’s films like Frankenweenie that keep cinephiles coming back to his body of work.