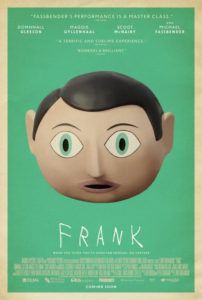 Somewhere between genius and madness resides Frank, a fictionalized take on the story of Chris Sievey, a British punk rocker who, while performing as his later alter ego Frank Sidebottom, wore an oblong papier-mâché head in a kind of bizarre comic performance art. As a substitute keyboardist in Sidebottom’s Oh Blimey Big Band, green college student Jon Ronson played alongside Frank and witnessed the oddball phenomenon first-hand. He later wrote about his experiences in a newspaper article that was adapted into a screenplay by Ronson and Peter Straughan (The Men Who Stare at Goats), transferring the setting from the late 1980s and 1990s to a contemporary backdrop of social media and indie music festivals. Lenny Abrahamson (Garage) directs this beyond-eccentric comedy that has much to say about the creative process and modern music scene.

In the film, Ronson’s counterpart is lowly twentysomething office drudge Jon (Domhnall Gleeson), who struggles to find a cohesive outlet for his musical aspirations but only renders mere fragments of songs in his parents’ suburban middle-class home (one of his gems: “Ladies have babies… That’s how it works”). One day at the beach, Jon witnesses an attempted suicide by the keyboard player for the unpronounceable “Soronprfbs”—a band name meant to be read, not spoken. Jon makes a joke that he can play keys, and the band’s manager Don (Scoot McNairy) hires him on the spot. Jon soon meets Frank (Michael Fassbender), the band’s frontman who insists on wearing a large plaster head at all times: on-stage and off, in the car, in the shower, everywhere. As the band’s both spiritual and artistic leader, Frank is certainly mentally ill, though there’s an infectious method behind his lunacy when he pushes his fellow members to the “far corners” of artistic creation.

Under a head for much of the picture, Fassbender has never quite played a role like this. He’s known for gruelingly harsh roles in Steve McQueen’s Hunger, Shame, and 12 Years a Slave, and his more mannered turns in Inglourious Basterds or Prometheus, but he’s definitely not known for comic material. And his performance here relies on his expressive, wirey body gyrations and the muffled intonations from under the head, always fully aware of the comic undertones of his character without becoming exaggerated to an overt degree. Less expressive are the Soronprfbs’ other, moody band members: snooty percussionist Nana (Carla Azar) and French-speaking bassist Baraque (Francois Civil), and the icy theremin and synthesizer player Clara (Maggie Gyllenhaal), who’s jealously devoted to the very notion of Frank and the artistic purity he inspires. The band’s rather great sound recalls spoken-word Jim Morrison lyrics with an electronic Radiohead back.

When Jon accompanies the band on what he thinks is a weekend gig, he soon learns they’re headed to a cabin by a lake where they’ll stay until an album is finished. Clearly the odd man out, Jon watches bemused from a distance as Frank arranges a kind of yearlong music camp retreat where they record nature sounds and have various mental breakdowns in the spirit of creative discovery. Insanity becomes a prerequisite for Frank’s brand of artistic drives, but Jon might be too sane. Don qualifies to be sure; he admits to being institutionalized for a mannequin fetish. And anyone who wears a giant head, even as an extended art project (which, in Frank’s case, this is not), has issues. Fortunately, Abrahamson perfectly balances Frank’s gradual downshifting of tones from offbeat comedy to emotionally bare drama in the final act, as the best indie comedies often do.

There’s the greater problem of commercialism at the center of Frank. Inept next to his newfound bandmates, Jon doesn’t quite fall into the spirit of uninhibited artistic inspiration, but he tries, if only to somehow bridge the gap between their outsider art that has no built-in audience, and his own ambitions to master social media crowds and turn Soronprfbs’ music into a commercially-approved sound for the upcoming SXSW festival. He Tweets endlessly about the bands non-progress and posts videos on YouTube about their creative exploration, and through the course of the film it becomes evident that Frank is just as much about people like Jon, who contribute nothing to music culture, as it is about those rare on-the-margins artists creating art for no one in particular. But as Gleeson proved in last year’s About Time, he’s incredibly likable as a ginger-haired, self-effacing British stereotype, and almost convinces us that Jon has what it takes to truly delve into Soronprfbs and lose himself, until he pauses to Tweet at a crucial moment.

Often hilarious and surprisingly profound by the final scenes, Frank feels like a Wes Anderson film except without the exacting visual precision, or perhaps more akin to something like Ruby Sparks in its themes. The lensing by James Mather is clear and somewhat muted in earthtones, but it’s the contagious and peculiar energy of the artists’ isolation and experimentation that grabs us, and the significant emotional impact that pays off. The music of the Soronprfbs, too, inspires, having been played by the actors in a rough yet infectious manner; it’s enough to incite a download of the soundtrack and prolong a wish that these actors would release an album of their own. Filled with excellent performances and an unconventional quality that retains its accessibility, Frank achieves what Jon wanted for the band by delivering a slyly commercial product that proposes that not all art requires validation from the masses.