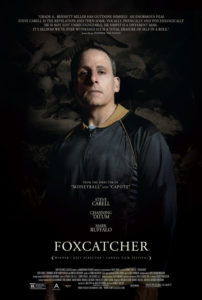 Psychologists could dig deep into the subtle nuances behind the male relationships in Foxcatcher, which tells the true-crime story of how millionaire John du Pont murdered Olympic wrestling champion Dave Schultz in 1996 and engages in a mordant character study about repression, loneliness, and brotherly bonds that ultimately ends in tragedy. While director Bennett Miller (Capote, Moneyball) delivers a curious, bleak, and bizarre series of events in his film, the suppressed emotions of its three-dimensional characters take precedence in a trio of incredible performances given by Steve Carell, Channing Tatum, and Mark Ruffalo. Each play complex characters brought to life in a tense triangle of familial love, and perhaps love of another kind too, and each role is allowed to come alive in the screenplay by Dan Futterman (Capote) and E. Max Frye (Something Wild). Megan Ellison’s Annapurna Pictures, easily one of the finest production companies to emerge in recent years, takes co-production duties alongside Sony Pictures Classics, another fine company, for a picture that will surely earn awards attention and accolades galore.

Part of the reason for this is Carell’s incredible and unexpected dramatic turn as du Pont, a member of the prestigious and historic du Pont family (chemical manufacturers), whose Pennsylvania estate was known as “Foxcatcher Farms”. Du Pot sorely despised his mother (Vanessa Redgrave), obsessed over bird-watching and taxidermied animals, and remained isolated and peculiar for much of his adult life. If you’re thinking to yourself that this sounds like Norman Bates from Hitchcock’s Psycho, you’re not alone. Carell embodies a refined and self-important air, a character born and raised in money, whose power has not been earned but passed down and now remains an awkward and socially inept product of his status. Though he’s also incredibly strange, controlling, and has a disquieting love of guns, his general weirdness is perceived from his soft speech patterns and off-putting presence, including a set of choppers that look something like rotten baby teeth. And despite all that, at first appearance, he retains a certain magnetism thanks to Carell’s performance; maybe it’s our hope that under the prosthetic nose and aging makeup, du Pont is somehow like Carell. It’s a hopeless wish.

The film opens with Mark Schultz (Tatum), who, in 1984, won a gold medal at the Los Angeles Olympic games. Three years have since passed, and Mark has found himself aimless and virtually destitute. He’s dim, underbite and cauliflower-ear laden, and lives a solitary life devoid of friends. His kind and supporting elder brother Dave (Ruffalo) also took home a gold medal in wrestling in 1984, but now lives in Colorado alongside his wife (Sienna Miller) and two children, training wrestlers for competition. That America doesn’t provide its gold-medal winners with the appropriate level of praise and support they deserve is just one of the arguments du Pont eventually makes to Mark when, after calling Mark out of the blue and inviting him to Foxcatcher estate, he asks Mark to stay and train for the Seoul Olympics, despite knowing very little about wrestling himself. Mark enthusiastically agrees to live in a lavish guest house without questioning du Pont’s motives, but Dave hesitates to uproot his family to join him.

More than that, Mark and Dave’s brotherly relationship is complicated, beyond mere hints of sibling rivalry. Dave practically raised Mark and wants his stilted brother to make something of himself. For Mark, he feels that he’s lived in his older brother’s shadow and carries that angst with him in a posture of brooding fury. Du Pont recognizes this in Mark because he too lives in the shadow of his disapproving mother, and his only friends growing up were those his mother paid to stay around. But it’s du Pont’s speeches that inspire Mark, though he can hardly read the subtext behind the speaker’s words. Du Pont talks of patriotism, sportsmanship, and wanting to be a father, brother, and coach to his wrestlers. There’s decidedly more behind his impetus, however. And yet, Foxcatcher is never so blunt as to depict what festers under the surface of scenes between Mark and du Pont when they’re alone. Moments where du Pont touches Mark in a manner of coach-like support are layered, as are congratulatory hugs. And then he asks Mark to personally train him to wrestle, if only as an excuse to roll around on the mats with him.

The tension grows under the surface when, out of some underhanded passive aggression, du Pont demands that Dave and his family move to Foxcatcher Farms to coach the wrestling team, and offers a salary Dave cannot refuse. Mark sees this as a betrayal and an unspoken conflict burns, with Dave never fully understanding the tacit relationship that has developed between his brother and his odd, powerful benefactor. There’s a fascinating sense of danger when, after du Pont hires a documentarian to make a video of his own greatness and contributions to wrestling, Dave struggles to take direction and cannot muster the lines he’s given to say—that du Pont is a role model for him. In the end, Dave’s unprovoked murder is entirely shocking, revealing the true madness of a man whose entire life has been about compensating for his considerable inadequacies with money and power, without which he would be nothing.

With stark attention to detail in recreating the Foxcatcher estate, production designer Jess Gonchor and set designer Kathy Lucas steep us in this morbid world, and cinematographer Greig Fraser captures it all in long takes and muted colors, but overall crisp lensing. Foxcatcher is a deliberately paced and shot film that clocks in at over 2 hours, allowing the material and psychological underpinnings to saturate and linger with an unsettling effect. Because Miller and his writers have left so much up for interpretation about du Pont’s motivations, attentive moviegoers are required to soak up the fine distinctions in the three central performances—which are each impressive and unique in their own ways. Tatum and Carell have never been better, the former a bastion of rage and the latter a troublesome merger of Freudian complexes. Ruffalo, too, supplies audiences with a role of many shades. Each turn results in awe and leaves questions that float in the viewer’s mind for long afterward, much as we struggle to grasp the real du Pont’s drives (he died in prison in 2010). And just as Miller once depicted Truman Capote growing obsessed with the real story behind a horrible killing, the director delivers an equally fascinating true-crime story here.