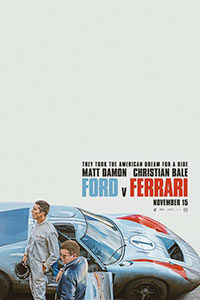 Ford v Ferrari has little to do with the automotive figureheads of the title, Henry Ford II and Enzo Ferrari. Rather, the film follows Carroll Shelby (Matt Damon), a former racer who owns manufacturer Shelby Automobiles, and Ken Miles (Christian Bale), a renegade mechanic and unparalleled driver, as the two attempt to build an American car that will unseat the longstanding Italian champion of the 24 Hours of Le Mans in France. James Mangold’s well-crafted engine of entertainment takes us from the mechanic’s workshop to the racetrack, delivering a sort of crossover film that will unite motorheads with people like me, who frankly couldn’t tell a Ford from a Ferrari. For all the scenes that reek of motor oil and exhaust fumes, there’s an equal number that have something to say about the state of American identity. Has America been reduced to Henry Ford’s conveyor belt capitalism that values volume over personal expression? Or does the true American ideal reside in the individual who pioneers new frontiers and distinguishes themselves against all odds? It’s a question raised by this story of the 1966 Le Mans race, and it’s a theme shared by other material of this ilk.

Specifically, I’m thinking of Francis Ford Coppola’s Tucker: A Man and His Dream from 1988, an underrated biopic about inventor Preston Tucker and his more efficient automobile, which was quashed by the U.S. government and its close ties to the industry’s major car manufacturers. Ford v Ferrari bears a certain similarity to Coppola’s film, while its racing scenes compare to those in the deliriously watchable melodrama Grand Prix (1966) by John Frankenheimer. Both earlier films suggest that in the shop and on the racetrack, the individual makes the difference, and it’s the individual that makes great strides in the advancement of the industry. In Mangold’s film, the conflict is between European craftsmanship and American brand industrialization and commercialization. For stodgy executives like Henry Ford II (Tracy Letts), it’s about selling more cars. Sales are down, but marketing exec Lee Iacocca (Jon Bernthal) has a plan to inject some life into the business by building cars that James Bond would drive and racing them around the world. Rather than build something unique, Ford does what any capitalist would do and tries to buy Ferrari. “He’s not Henry Ford,” says Ferrari (Remo Girone) as he turns down the offer. “He’s Henry Ford II.” It’s the last straw, time for Ford to write a blank check and show that “greasy wop” what for.

In the first two-thirds of Ford v Ferrari, the material might be misconstrued as a work of American exceptionalism with its prejudice against Italian pride and artistry, but it gradually gives way to a critique of corporate interests. Iacocca hires Shelby, who won Le Mans driving for Aston Martin in 1959, to build the racer that will win Ford the marketing clout to sell more cars. Building a faster automobile is less of a problem than having someone who can drive the thing. But Ken Miles, an English-born World War II veteran who runs a mechanic shop in Los Angeles alongside his wife Mollie (Caitriona Balfe) and son Peter (Noah Jupe), is too unpredictable for the corporate vision of the Ford Motor Company. “Ford means reliability,” says one exec. “Ken’s not a Ford man. He’s a beatnik.” But Shelby knows Miles is the only driver for the job, even if he’s not a perfect spokesman. In one scene, Miles buzzes a car around a track at 200 miles per hour and diagnoses its problems like he’s just given the machine a CAT scan. The problem is Miles’ prickly personality; his certainty in his abilities both behind the wheel and under the hood is only matched by his willingness to insult anyone who disagrees with him. 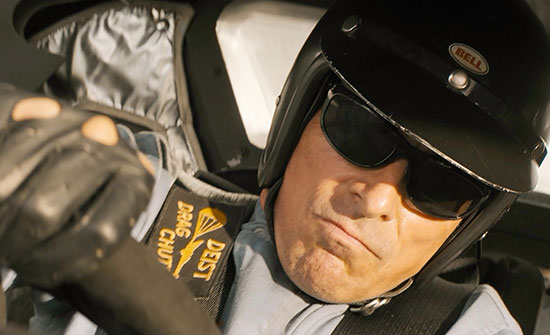 The setup recalls one in The Fighter (2010), where Bale gives the film heart with his scrappy and unpredictable performance opposite a relative straight man, here presented by Damon’s performance as the gum-chewing Texan whose bum ticker has kept him off the racetrack. Nailing Miles’ Birmingham accent, Bale is the film’s lifeblood. The scenes with Miles’ wife and child give the character dimension, but it’s those frequent clashes with authority and edgy interactions that lend the film its bite. Moreover, the sheer star power and energy of these performances elevate Ford v Ferrari, which is the Rocky IV of car movies. Except, instead of Ivan Drago’s team of Soviet scientists using advanced technology to gauge the success of their boxer, Shelby’s team must contend with Ford’s committee of engineers who insist upon using onboard computers. Miles, however, can do more to understand aerodynamics with yarn and some tape. Still, there’s no out-maneuvering Ford’s marketing head, Leo Beebe, played with smug, oozing smarminess by Josh Lucas, a character determined to stifle Miles’ individualism to sell more cars. Beebe, not Ferrari, is the film’s villain.

Mangold transitions flawlessly into the period and subject matter, as one might expect. He’s among our most talented journeymen directors, capable of rekindling the corrupt police dramas of Sidney Lumet with his underrated Copland (1997) and creating an archetypal musical biopic with Walk the Line (2005). More recently, Mangold has been tied up in Fox’s now-defunct X-Men franchise, although his offerings, The Wolverine (2013) and Logan (2017), were among the best because they recognized that everything outside of Hugh Jackman’s iconic role was superfluous. Again working with Fox, Mangold’s treatment of Ford v Ferrari has a rich sense of period details and character dynamics, and he uses the film’s 152-minute runtime to allow characters like Mollie and Peter to breathe, and he never places the racing above the human stakes. On the technical side, the races come to life with a combination of real cars and unobtrusive CGI; the viewer never sees the digital work and can completely lose themselves in the production. The film feels tactile and real thanks to convincing period details by production designer François Audouy and cinematographer Phedon Papamichael, as opposed to another digital concoction clogging up the multiplexes.

Ford v Ferrari may be a crowd-pleaser, but writers Jez Butterworth, John-Henry Butterworth, and Jason Keller instill a commentary about how America long ago stopped caring about breaking records and started worrying about how many units they could sell—an unlikely theme for a rousing race film. After all, Ford and Bebee are more concerned with image than ingenuity; Shelby and Miles are just a means to the ultimate end of increased sales figures. Still, there’s a soulful quality in Shelby’s bookend voiceover, in which he ruminates, “At 7,000 RMPs, everything else fades and you find out who you are.” This comes to mind when Shelby takes Ford for a spin in their latest racecar prototype; the extended scene of Ford’s crying that follows is wildly funny. And though it’s a moment played for laughs, it also signals how the craftsmen who build these machines faced themselves at high speeds regularly, and each time they come out with a greater sense of personal certainty and individualism. People like Miles, who thrive in this environment, are few and far between. Looking at Ford and Bebee, you get the impression that they’ve never really looked at themselves, except in the mirror to straighten their tie for the next boardroom meeting.