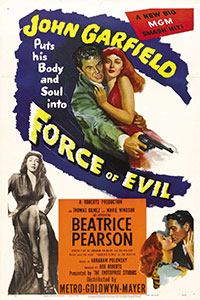 Force of Evil opens on a shot of Wall Street, the frame almost twenty stories high in the asphalt jungle. Below, a crowd full of wannabe movers and shakers bustles, and each one of them is desperate to make their fortune. Among them is Joe Morse (John Garfield), a successful attorney who, in his voiceover, schemes to make his “first million.” But this 1948 film noir has other things in store for Joe; he starts out with an office “in the clouds,” and he ends up at the lowest point imaginable. At first glance, Force of Evil might seem to be a standard noir programmer of the classic Hollywood postwar era, built up around the illegal numbers racket. Except, with his screenplay and direction, Abraham Polonsky takes an unflinching jab at America’s all-consuming capitalism, powerfully links the film’s themes with its noirish visual treatment and cutting, and uses poetic dialogue that has the gravitas of a Greek tragedy. Anchored by a razor-sharp yet sensitive performance from Garfield, Polonsky’s film is the legacy of two talents whose careers would be derailed by the House Un-American Activities Committee. Although it marks their only collaboration as actor and director, their production weighs ambition against morality in a streetwise yet socially conscious manner. It’s a hard-boiled and edgy film, but also a soul-searching view of American greed.

This review was suggested by Julian and selected by Patrons in a Patreon poll. Thank you, Julian, for selecting this film! And thanks to all Patrons for your continued support!

The full 2,000-word review is currently posted on Patreon. Join Deep Focus Review’s Patron community, and you’ll receive exclusive access to this review and many others writings published on Patreon first.