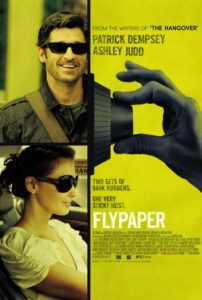 Based on a script completed twelve years ago by Jon Lucas and Scott Moore (The Hangover), Flypaper feels, appropriately, like something that came out in the late 1990s. This independently produced bank heist comedy debuted at the Sundance Film Festival, where IFC picked it up for distribution undoubtedly based on the commercial draw provided by stars Patrick Dempsey (who dusted off this unsold script and championed it as co-producer) and Ashley Judd. But even this screenplay, modernized with “Twitter” and “recession” references though it may be, cannot help but carry a dated odor. Any potential for mindless entertainment value is hampered by cliché characters driving a derivative scenario, which plays out to predictable, unconvincing ends that seem all too familiar and far less diverting than they should be.

Dempsey and his hair star as Trip, a neurotic guy with an unspecified mental condition that contains elements of OCD, autism, and Tourette’s syndrome. He enters a bank and begins to flirt with a teller, Kaitlin (Judd), when all at once two sets of bank robbers, taking advantage of a two-minute lull in security, announce they’re holding up the place. One high-tech trio (Mekhi Phifer, Matt Ryan, and John Ventimiglia), complete with neat gadgets and top-notch weaponry, want the vault’s contents. The second group, a couple of redneck yokels calling themselves “Peanut Butter and Jelly” (Tim Blake Nelson and Pruitt Taylor Vince), want the ATMs. At first, bank heist movie formula plays out nicely, with a colorful array of one-note hostages (played by Curtis Armstrong, Rob Huebel, Adrian Martinez, Octavia Spencer, and Jeffrey Tambor) complaining to comic effect and the two groups of robberies divvy up responsibilities.

But then, someone begins secretively killing both hostages and bank robbers, and the movie spins into a whodunit. Trip acts as the resident investigator, his brain somehow tuned to pick up clues and extrapolate small details (shown through overused black-and-white cutaways), the downfall being it leaves him socially awkward, as proven during blown attempts at talk with Kaitlin. Dempsey forces the performance but underplays his character’s natural inelegance, especially given how well dressed and groomed (and coiffed) the actor appears to be. He was simply the wrong choice for the role. At any rate, Trip discovers a Keyser Söze-esque character has brought them all together for a single purpose: to die one-by-one because they’ve all wronged him (or her) somehow. Granted, a number of bystanders are collateral damage, such as the pointless blonde whose presence is summed up in one line: “No English.” The trouble is, none of the supporting characters move beyond being a hostage cliché, not even Dempsey’s Rain Main-meets-Sherlock Holmes role, and so their ultimate deaths are uneventful for the viewer.

What audiences will immediately notice is that the movie, directed by Rob Minkoff (whose directorial career ranges from The Lion King to The Forbidden Kingdom), never leaves the bank, and the police never have a function in the story. Even though the robbers detonate plastic explosives and shoot firearms throughout the course of the movie, never is there a shot of the police forming a wall outside the building, nor is there a grizzled negotiator on the scene. To preserve the intended suspense of the emergent murder mystery, the movie remains self-contained. In a way, this is both the movie’s best and worst quality. Without the police, it avoids another set of clichés and preserves the integrity of the enclosed, hostile environment. In doing so, however, it sacrifices any hope for even wishy-washy heist movie realism.

Flypaper’s best moments are during the animated title sequence which has little of anything to do with what follows. After that, it goes increasingly downhill into Clue and Murder on the Orient Express territory, until the all-out appalling third act resolution. All through, Dempsey’s performance ranges from overwrought to just-plain-awful, while the other actors fill roles that prove underwritten by the time their characters meet their demise. Stealing the show are Nelson and Vince, both having played this sort of dumb-but-funny part before, but both remain so darn good at it. And by the time the movie’s Keyser Söze is revealed, chances are you’ve stopped caring. That is, if you ever cared in the first place.

It would be easy to write the movie off as an instant flop, but then again, when you slap “from the writers of The Hangover” and “starring Patrick Dempsey and Ashley Judd” on a poster, the general population is bound to flock. As such, IFC will probably make a profit, even with the film’s limited distribution to small arthouse theaters and various video-on-demand vendors. Commercial moviegoers will certainly be attracted to the marketable stars (although, Judd is about 12 years passed her prime in movie star appeal) and zany-bank-heist-comedy hook, even if they regret wasting their money afterward.