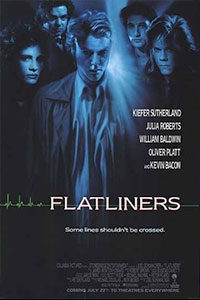 Joel Schumacher’s Flatliners epitomizes the sleek thrillers of the 1990s, offering an excessive visual presentation that occupies the space where a substantive commentary should go. Populated by several of Hollywood’s most promising stars from the early part of the decade—including Kevin Bacon, fresh from Tremors; Julia Roberts, her celebrity just solidified by Pretty Woman; and Kiefer Sutherland, with two Young Guns titles behind him—the film’s over-produced stylistic approach remains effective, if distracting. By 1990, Schumacher had demonstrated his deft hand at ensembles and accessible horror films, having St. Elmo’s Fire (1985) and The Lost Boys (1987) to his credit. He would remain one of the most sought-after directors for much of the 1990s, helming successful John Grisham adaptations and profitable, yet utterly dull, entries in the Batman franchise. And while a string of failures in the 2000s left Schumacher to release schlocky garbage like The Number 23 (2007) and Trespass (2011), it should not be forgotten that his work once stood at the forefront of the 1990s pop-culture zeitgeist.

With that said, Flatliners has never been a very good film. Its popularity subsists on star-power and surface sheen—of which there are copious amounts. The script by Peter Filardi attempts to wax philosophical about religious and philosophic views on death, following a group of self-serious medical students who seek to explore the boundaries of the afterlife, while also testing their own overconfident abilities as would-be doctors. Using drugs to induce death, the students cause their own flatlines on a heart monitor. After a minute or so (a timeframe that increases with each person to try the experiment), the others resuscitate the willing participant, much to the audience’s anticipation. Will they be able to revive the subject? After one or two participants come back without much effort, the suspense hardly seems worth getting excited about. Fortunately, Filardi interrupts the otherwise heavy material with humor provided by go-to comic relief actor Oliver Platt, playing Steckle, a realist character who dictates his inner monologue on a recorder. His unwillingness to participate makes him the only character who realizes the absurdity of the film’s setup: “Halloween. A full moon. Aren’t we going a bit too far?” Of course, each of them learns that exploring death has its consequences, as they’re haunted by past traumas and unconscious guilt until they resolve their karmic crimes.

Sutherland plays Nelson, the resident bad boy who conceives the idea and insists on being the first to go. When Nelson returns, he talks about his eyes being opened to the world around him—a notion that convinces the others to try their luck at death. But whatever the temporary benefits are (they’re never elaborated upon), they’re quickly replaced by waking dreams of unresolved psychological hangups. Nelson is visited by a boy he bullied as a child, and his hallucination resolves to beat the living daylights out of him. Another hotshot med student, David (Bacon), bullied a young black girl as a child, and after he returns from beyond, she appears to David to deliver endless streams of playground insults. (Just to keep track, that’s not one but two former bullies out of four med students.) Rachel (Julia Roberts), a character whose beauty the other characters remark about constantly, still blames herself for her Vietnam vet father’s drug addiction and suicide after his return from the war. And then there’s the resident sex, lies and videotape character played by William Baldwin, whose lousy views toward women (despite being engaged to Hope Davis) leave him haunted by his promiscuity—a plot point undoubtedly informed by Rob Lowe’s sex tape scandal in the late 1980s. 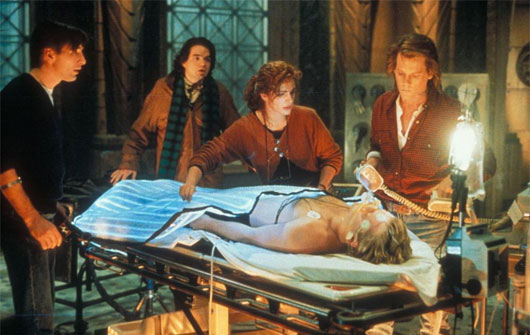 As suggested, Flatliners has one of the busiest visual presentations audiences are likely to find in any 1990s-era thriller. Cinematographer Jan De Bont and production designer Eugenio Zanetti realize the film’s world as a post-apocalyptic med school. Shot around the University of Chicago and the Museum of Science and Industry, the film’s unsubtle atmosphere drenches every scene, no matter how inconsequential. The Holloween setting finds slow-motion passages of costumed extras dancing about and autumnal decorations littering the backdrop. Steam emanates from every manhole, while smoke from burning piles of leaves fills the air. Random sheets of plastic hang from scaffolding, as though every building in the film were undergoing renovations. Reflective shadows have been projected onto walls like light bouncing off water, suggesting there’s a pool in every room, or even outside, except there isn’t. And don’t forget the neon graffiti faces painted onto brick walls in alleyways, foreshadowing Schumacher’s use of them in his cartoonish Batman films.

One or two of these touches could create an effectively creepy mood, but all of them together begin to generate unintentional questions about the characters and their settings. For instance, the makeshift lab where the group holds their secret experiments: Couldn’t they have found a workspace without a leaky roof that causes a power outage at an inopportune time? Or at least a room with better lighting? Instead, De Bont saturates the frame with a pumpkin-orange hue, contrasted by neon blue lights that imply an antiseptic quality. But these stylistic choices apply not only to the baroque room where the characters play god, but also their daytime classroom settings, which, due to shadowy lighting, look as though their instructors are attempting to recreate the conditions of medieval autopsies. Moreover, each of the group’s hallucinations have been shot in a unique style: Sutherland’s are lit with varying blue light bulbs, Roberts’s are accompanied by red neon, Bacon’s dreams contain frenzied cutting, and Baldwin’s black-and-white video recordings appear projected onto televisions and walls—and all of them are intercut with flashbacks.

Harp as I have about the visual choices in Flatliners, its stylistic glut and attractive cast were enough (at the time of its release) to divert from the rather silly outcome of the plot. Today, it seems entirely too convenient that everyone survives their ordeal. In essence, the penalties for toying with death involve shedding one’s baggage, followed by a sense of lasting relief. The only negative consequence for any of these characters is Baldwin breaking up with his fiancée (though one suspects he’ll become a better person in the long run). Everone else becomes a happier, more well-adjusted person for their experiences. The lesson here: You, too, can free yourself of lingering psychological issues by orchestrating your own temporary afterlife experience. Though the film would go on to become a major theatrical hit, earning nearly three-times its $26 million budget, followed by a successful life on VHS and cable, Flatliners has not aged well. Aside from Bacon and Platt, the acting is either overblown (Sutherland) or inconsistent (Roberts, and her wavering southern accent). And a slew of subsequent films (watch Defending Your Life or Hereafter) have dealt with near-death experiences with far more supernatural and emotional consequence, leaving Flatliners, however exceedingly polished, to feel hollow.