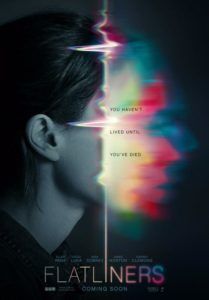 Joel Schumacher’s 1990 Flatliners receives the dumbed-down Hollywood remake treatment courtesy of Niels Arden Oplev, the Danish director who received far too much credit for helming 2009’s The Girl with the Dragon Tattoo. While some filmmakers like, say, Mike Flanagan (Ouija: Origin of Evil, Gerald’s Game) thrive within the constraints of a low-budget production, Oplev’s limitations as a visual storyteller become obvious here, as his fix-it-in-post-production approach leaves his Flatliners looking like a CGI confection. Worse, the story unfolds in a manner similar to every J-horror title in the last decade or more, complete with dark-eyed specters holding a grudge. It’s a shame that now two films have failed to make good use of the intriguing basic concept, where medical students explore the great beyond for a few brief minutes, and after returning with an account of their experiences, they’re haunted by phantasms of their unconscious guilt. And rather than becoming existential or even soulful, Oplev’s remake reduces the setup to a platform for cheap scares.

The original’s cast (Kiefer Sutherland, Julia Roberts, Kevin Bacon, etc.) contained Hollywood mega-stars in their prime. The remake’s headliners are Ellen Page and Diego Luna, both talented performers to be sure, but not major stars. They’re backed by a group of young relative unknowns, and collectively their most impressive credit is TV’s The Vampire Diaries. Page stars as Courtney, a med student who convinces several peers, a privileged bunch living in distractingly elaborate apartments, to explore the afterlife by inducing death. Courtney is the first to go, and when she returns, her brain feels invigorated. She recalls every word from textbooks read long ago, inciting the others to follow her example. At first, it seems as though dying isn’t all that traumatic for the others; it’s more like a designer drug. Just hours after flatlining, Jamie (James Norton) demands dancing and shots, while Marlo (Nina Dobrev) and Sophia (Kiersey Clemons) return from death and their first impulse is to attend a loud rave and engage in casual sex.

Of course, it doesn’t take long for Courtney and the others to realize their pasts have come back to haunt them, and most of their crimes are similar enough to those of the original’s characters. But unlike the 1990 version, the hauntings aren’t merely their unconscious minds playing tricks on them; in some cases, they follow the horror movie rulebook for maligned spirits. The screenplay by Ben Ripley (Source Code, 2011) injects plenty of ambiguity and speculation about the nature of the characters’ hallucinatory experiences; at the same time, the film leans toward a religious explanation. Marlo believes their hauntings to be a “demonic” presence “feeding off the guilt of our sins.” These decidedly Christian notions of demons and sin extend to the others, as Courtney’s out-of-body journey in death propels her through not one but two glowing, stained glass Christs. Elsewhere, the characters are haunted by apparitions made to look like grayed-out ghosts from every supernatural horror film of the twenty-first century. Meanwhile, Ray (Luna), the resident skeptic and only one smart enough not to attempt the experiment, wonders why his fellow med students have so quickly jumped to the most outlandish explanation possible.

Schumacher’s version may have been overstylized, but the craftsmanship of cinematographer Jan de Bont remained undeniable in scene after scene of the original’s effective lighting and atmospherics. By contrast, Oplev’s version looks digitized and flat. His characters run around in dimly lit corridors and other-worldly set-pieces of computerized fabrication. Each of the hallucinations exists either on lousy-looking dreamscapes or saturated by digitally painted light. Take the aberrations that appear to Marlo in an abandoned warehouse (for some inexplicable reason); the entire set looks like a green screen creation and has no tangible quality. Courtney’s flatline experience finds her walking through a planetarium show, with orbs of light and blue energy zipping around her. All of this has been rendered with the polish a mere $20 million budget affords (the original cost $26 million, and that’s before adjusting for inflation)—which is to say, it looks cheap and unconvincing.

Oplev hits every beat of the original without injecting one creative idea or substantial character, leaving what should be emotional resolutions to feel empty and meaningless. Even more frustrating, the scares in Flatliners remain entirely incongruous within the film’s own flimsy logic. For instance, Jamie is haunted by a ghostly-looking character who, as it turns out, is alive and well. So why does it appear like a ghost? Indeed, each of the characters who flatline faces a deadly threat in the form of a decaying ghost-thing, even though their crimes are sometimes just being a jerk or a bully. None of it makes much sense, as the filmmaker wants the material to be something it isn’t (and the pointless cameo by Sutherland only leads to more confusion by failing to connect the original to the remake). Schumacher’s Flatliners is prime material for a remake, being a slick idea that wasn’t handled very well in the first place; but alas, this version is a disposable, nonsensical, and instantly forgettable mess that makes the original seem almost masterful.