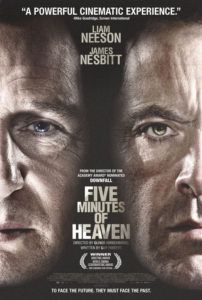 Not much happens in Five Minutes of Heaven, but what does happen proves to be moving and, at times, emotionally devastating. Picked up for U.S. distribution by IFC at the Sundance Film Festival, where it won World Cinema Directing and Screenwriting Awards, the film has a quiet way of getting under your skin but doesn’t amount to much beyond a conflict-resolution drama about some long overdue reconciliation. The actors, directing, and setting all compel our emotions, but that the story remains so simple is the film’s downfall.

Based on actual events, three tension-filled scenes make up the entire movie. They tell how Alistair Little (Mark Davison), a young Protestant upstart in the Ulster Volunteer Force, the “terrorist” organization that in 1966 declared war on the IRA for failing in their duties against the British Army, pointlessly assassinates a Catholic man in 1975 and then lives with guilt for his remaining years. The victim’s brother, Joe Griffen (James Nesbitt), all grown up and dealing with a lifetime of misplaced responsibility thrust upon him by his guilt-slinging mother, witnessed the murder and did nothing because he was 11-years-old at the time. Little, having served 12 years in prison and coming out a changed man, is played by Liam Neeson. The two plan to meet for a prerecorded television interview that will allow Griffen to get closure (and the organizers to get ratings), except murdering Little is the only way Griffen believes closure is possible.

Playwright Guy Hibbert wrote the screenplay, taking optimistic liberties with the real story to wrap up the events with a beautiful big bow. Having conducted interviews with the real Griffen and Little, Hibbert dwells on the idea that Griffen refused to meet his brother’s murderer and indeed vowed to kill him if ever they did meet. But rather than leave the story where it belongs, in the truth, Hibbert fabricates an ending where the two men punch out their troubles, letting their anger and guilt go in the process, when the reality is much less sanguine.

Oliver Hirschbiegel—who was one of the many directors on The Invasion, though he was the first, so he received the credit for the final film—keeps his presence relatively unknown behind the camera. He observes, allowing his two powerhouse actors to do their thing. Meanwhile, the treatment offers little of interest on a formal level. There are some tense moments when Griffen sweats before the TV crew, and Hirschbiegel’s camera acts as their camera. Still, nothing about the direction explicitly involves us on an emotional plane.

All we’re doing here is reveling in the acting prowess of Neeson and Nesbitt, the former whose presence is towering yet filled with remorse and the latter who conveys suspenseful nervous rage throughout. Nesbitt paces back and forth, chainsmoking and worrying about the position of the knife in his belt, sweat building on his brow. Neeson doesn’t have to do much besides looking like a statue with sad eyes and a looming presence. And yet, though the limited range in these characters won’t earn the actors any awards, the performances make the oversimplified story watchable.

U.K. filmmakers seem to have no limit in the ways they can make “the Troubles” dramatic and involving. Still, a recent influx of films about the conflict, most distributed by IFC, have become increasingly wearisome (but admittedly more welcome than asteroid-hurling-toward-earth or volcano double-features). But just as Americans are not likely to stop making 9/11 or WWII movies, the Brits and the Irish will probably keep telling these stories. The problem is, there are better movies that delve into the Catholic and Protestant war in Ireland, and with more poignancy. Just this year, Hunger made a bold statement that outshines most others in this category; so consider Five Minutes of Heaven an undemanding treat in comparison to that bold, difficult film.