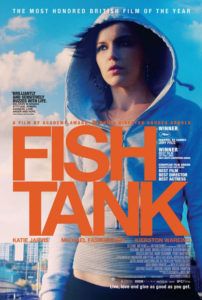 Mia doesn’t go to school. The 15-year-old spends her days prowling around the grounds of her housing estate looking to score some money for booze and avoiding her irresponsible mother, who in fact behaves more like a rowdy sister than a parent. Mia’s younger sister is growing up into a hellraiser, just like her mother, and there’s little affection between siblings. Mia’s only solace is dancing alone in an abandoned apartment, copying hip-hop routines she’s seen online. She’s passionate for the idea of freeing a sickly horse kept by neighborhood gearheads, perhaps because she knows what it’s like to starve for freedom. But Mia’s life doesn’t contain the possibility for such a romanticized escape; rather, she’s trapped with no way out of her claustrophobic and unfortunate social circumstances.

Katie Jarvis, in her first appearance on film, commands the screen as Mia in Fish Tank, an unflinchingly truthful look at the trials of a teenager’s life in a dingy British housing complex. Jarvis was discovered by the film’s writer-director Andrea Arnold (Red Road) when she was scouting for fresh talent for the production, and what a discovery the filmmaker has made. Jarvis’ portrayal is something to be watched and studied like a voyeur, because so much truth exists in the performance that the audience feels like it’s seeing a slice of real life contained in a tumultuous little bubble, hence the title. The effect is frightening yet compelling to behold.

The story progresses when Mia’s mother, Joanne (Kierston Wareing), brings home a new lover, Connor (Michael Fassbender, from Hunger and Inglourious Basterds). Mia has eyes for the older man, perhaps only because he doesn’t disregard her as a pest as her mother does. Connor takes their family out for a drive and there’s a feeling of family unity, but only because Joanne has put on an act for Connor’s benefit. Mia confuses her feelings for him, and he too may have an ulterior motive, which progresses into achingly uncomfortable and disturbing territory. Still, we want to believe that there’s some good in Mia, even when her reactions can be unforgivable. But Arnold doesn’t ask us to judge Mia one way or the other, rather we’re to share in the experience of her unfortunate life. Jarvis is simply brilliant at taking us back and forth between despising Mia to respecting her for having sense enough to at least desire escape from her enclosed world.

The film, which had a slow import into U.S. theaters and has finally arrived thanks to IFC, earned a considerable amount of attention on the award and festival circuits. It won the BAFTA for Outstanding British Film, the Jury Prize at the Cannes Film Festival, and several prizes among critic circles. The praise is much deserved for the film’s staggering reality and affecting real-life drama. Everything from the minimalist, documentary-style camerawork to the inconspicuous screenplay points toward the film’s realist intentions and the immediacy the characters and their situations. But the most convincing element of the production is Jarvis, whose performance is less acting than an embodiment of what it’s like to lose control of your own life.

Watching Fish Tank may be a difficult experience because it feels so authentic, yet bi-polar. There’s a topsy-turvy sense of up and down between Mia and her family that’s frankly exhausting, but it’s also a testament to the resilience of youth. Amid the shouting and hitting and pinching, there are occasional moments of tenderness that while welcome, do not make up for the abuse. Mia’s downward spiral leads her on an inevitable path that becomes increasingly painful for the audience to endure, but that’s why Arnold’s film is so successful. The experience is raw and uncomfortable and uncompromising, a coming-of-age tale without the desire to artificially dramatize a troubled youth, rather just present life as realistically as possible through the protagonist’s eyes. And despite its grim subject matter, Arnold somehow leaves the audience hopeful for Mia, which is the saving grace in a film so powerfully unsettling.