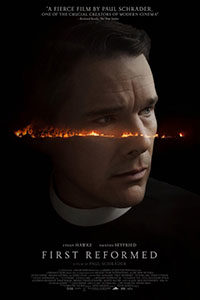 First Reformed distills everything that makes Paul Schrader a unique presence in American cinema. The film refines the preoccupations that have been with Schrader since his early effort as a screenwriter with Taxi Driver in 1976. Schrader has, over the years, told stories with a similar trajectory to that Martin Scorsese film—agonizing journeys of degradation that ultimately lead his self-obsessed male protagonists to a revelatory solution, usually in the form of a perceived source of purity, often a woman or grand project of some kind, which allows a measure of hope or reconciliation, albeit dark and tainted. In Taxi Driver, a film with which First Reformed has much in common structurally, Travis Bickle put his misguided energy into saving a young prostitute whom he deemed an innocent in need of saving; in Schrader’s uncanny biography Mishima: A Life in Four Chapters (1985), Yukio Mishima’s performative existence culminates with his suicide. In First Reformed, a dying holy man, set into a tailspin by an ecological Cassandra, finds himself beset by physical and spiritual agony, and the resulting film demonstrates Schrader’s belief that the human race has corrupted its planet for profit, leaving many trapped by an existential conflict.

The Michigan-born auteur was raised in the Calvinist Christian Reformed Church and didn’t see his first film until the age of 17. His upbringing has always left Schrader’s work to feel removed from his New Hollywood contemporaries such as Scorsese, Steven Spielberg, and Francis Ford Coppola, whose films harkened back to their own childhood experiences with cinema. Schrader served as a disciple of film critic Pauline Kael before working as a critic himself, and then ultimately sold his first script, The Yakuza, to Hollywood. Given his late introduction to film, he approaches cinema as a medium to convey an intellectual concept, while also delving into his own dark complexes. Over the last four decades, Schrader’s output has gravitated toward self-destructive tendencies concerning sex and violence, reflecting in film his own atheism, substance abuse, sexual curiosity, and attraction to toxic living. From male prostitution in American Gigolo (1980) to alcoholism in Affliction (1997), from incestual traditions in Cat People (1982) to sexual addiction in Auto Focus (2002), Schrader has explored unpleasant psychological and physical lows. 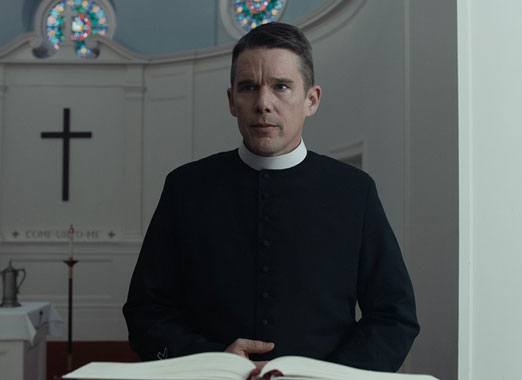 Now at 71, Schrader’s First Reformed derives from his book Transcendental Style in Film, published in 1972, a textual and formal analysis of the slow-cinema films of Robert Bresson, Yasujiro Ozu, and Carl Dreyer. The subjects of his book test viewers through meditative scenes, long takes in which the duration of the image wears on the viewer until a mindset is shared between the character onscreen and audience. As Schrader wrote in the new introduction to his republished book, “By delaying edits, not moving the camera, foreswearing music cues, not employing coverage, and heightening the mundane, transcendental style creates a sense of unease the viewer must resolve.” The duration of any given passage in a transcendental film adopts a phenomenological import that challenges us to understand it. And yet, despite writing a thoughtful and still readable book about the transcendental style, Schrader has not made a film in that style until First Reformed.

Influenced by Bresson’s Diary of a Country Priest (1951) and Ingmar Bergman’s Winter Light (1962), the film follows the disillusioned Reverend Ernst Toller (Ethan Hawke), who oversees a small Dutch Reform church in upstate New York. The First Reformed church has a 250th anniversary coming up, and the building itself remains a symbol of a bygone era, arguably simpler and more relevant times for a church. His few attendees every Sunday are dwarfed by the masses devoted to the nearby Abundant Life, one of those corporation-style churches overseen by Joel Jeffers (Cedric Kyles, also known as Cedric the Entertainer). The commercialism of Abundant Life, and even First Reformed’s modest gift shop, bother Toller; he prefers a quiet and monkish existence that adheres to less capitalistic uses for religion. He uses his time for self-reflection and, at the beginning of the film, begins to keep a diary and promises to write longhand each day for one year. At the end of the experiment, he will burn it. Facing uncertain death due to health issues, Toller drinks nightly and writes down his uncensored thoughts, which we hear in the character’s narration.

One day after mass, Toller is approached by a young pregnant woman named Mary (Amanda Seyfried), who asks him to counsel her husband, Michael (Philip Ettinger), an environmental activist disenchanted by Mary’s pregnancy. Given the likelihood that the human race will face an extinction level event in the next few decades, likely brought about by environmental collapse, Michael cannot justify bringing their child into the world. Toller’s attempts to provide hope amid despair are not enough, and a tragedy leaves the reverend sympathizing with Michael’s worldview. Perhaps fueled by his own bodily rot, Toller becomes hyper-aware of the moral and spiritual decay in his small town, in modern Christianity, and humanity’s negligence toward Nature. His consolation of and familiarity with Mary also seems a torturous reminder of his secular life and its failure, and their scenes together have an unspoken sexual tension that registers in subtle cues. Altogether, Toller’s physical and existential corrosion leave him to ask repeatedly, “Will God forgive us?” His uncertainty incites him to take action on the consecration of his church’s anniversary. 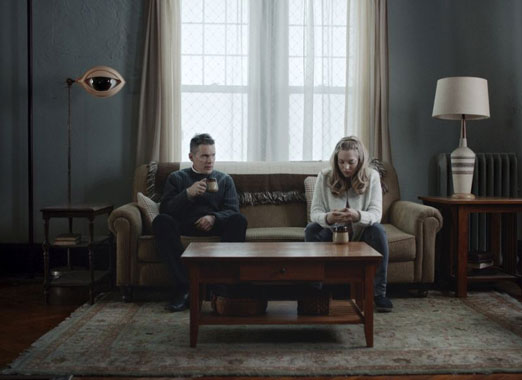 Hawke’s central performance, maybe his best, allows for layers to Toller that remain hidden yet readable. Indeed, it would be too easy to dismiss Toller’s behavior as a consequence of his body failing him, his alcoholism, or the sudden derangement of his mind. Such explanations are narrow—even as they’re potently described, such as a long shot of Toller pouring Pepto Bismol into his evening drink or, later, pouring Draino into his glass. He carries the burden of his choices throughout his life. His family line believed in patriotism and, when his son went off to a pointless oil war in Iraq and died, he questioned that. He has made errors of self-denial, such as his brief affair with the Abundant Life choir director (Victoria Hill). But he also cannot deny the state of the natural world. Hawke carries Toller’s burden on his brow, in the cracks of his face, as Toller realizes that the world is much worse than he imagined. Schrader shows us this realization through hypnotic, transfixing imagery that borders on surreal, while never feeling out of place from Toller’s perspective.

The film proceeds in quiet, intimate scenes that feel uncharacteristic for a Paul Schrader film, while the narrative path of First Reformed is pure Schrader. The sound design avoids complete silence; there’s an eerie rumble beneath every scene, implying that something looms under the surface. But the visual elements of Schrader’s film set the tone. Cinematographer Alexander Dyna shoots in an austere and boxy 1.37:1 aspect ratio, known as the Academy ratio (the standard of early Hollywood motion pictures). Dyna’s desaturated images have been contained within a frame that, given the omnipresence of widescreen, now feels restrained. Several films in recent years, including Kelly Reichardt Meek’s Cutoff (2010) and the films of Andrea Arnold, have used the Academy ratio as a way of circumscribing their film—and in effect creating a formal metaphor that reflects the limitations of the film’s world on its characters. Not since Mishima has Schrader employed such a mannered, brilliantly applied form-follows-function approach to filmmaking, which further demonstrates that First Reformed remains a glowing standout in the writer-director’s career.

Many have taken issue with the film’s worldview, from its utter dejection to its commentary on environmental concerns. Schrader drew from Yuval Noah Harari’s 2011 book Sapiens: A Brief History of Humankind, a study in human history that considers our progress through a series of revolutions (cognitive, agricultural, globalization, scientific). At the end of his book, Harari writes that humans have turned themselves into gods through our ability to create, destroy, and control our surroundings. He also suggests that, despite the technological advances that have turned us into the self-appointed deities of the Earth, the human race remains unsure of its goals beyond its temporary amusement. He asks, “Is there anything more dangerous than dissatisfied and irresponsible gods who don’t know what they want?” The world seems to be on the verge, according to credible science, and yet the human race cannot be bothered to take corrective action; we’re too busy bickering to realize that, in a few decades, none of these arguments will matter. These thoughts seem to consume Toller’s mind. Environmental breakdowns, nuclear holocausts, sweeping disease, and ironical overpopulation will wipe out humanity, as people aren’t willing to make sacrifices for ecological stability. “Anyone who is hopeful is simply not paying attention,” Schrader recently told Variety. 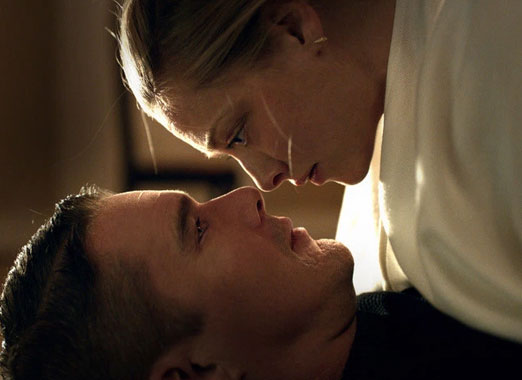 However bleak Schrader’s worldview is about humanity conveniently denying scientific consensus in favor of corporate interests and political ideology, the film’s air of extremism, both in its themes and the sheer affront of Toller’s actions, is not altogether devoid of hope. Granted, the film threatens to lose the viewer in the harsh reality of corrupt politicians and big businesses who attempt to deny or politicize the scientific reality of the dwindling environment to serve their own objectives, all while the church willingly complies. Schrader, no proponent of the church, resolves that religious extremism isn’t just about strapping on a suicide vest and walking into a crowd; it’s also about putting so much into one’s faith that, as a consequence, one deprives themselves of love and happiness. Even so, First Reformed has a serene, possibly horrific conclusion. It’s a final scene that either occurs in reality or takes place in Toller’s mind (the notion of drifting away into one’s reveries is established earlier in the film), and either way, it remains just as redemptive for the character.

During his press tour for First Reformed, Schrader has acknowledged that his film feels like a culmination, the end of a cycle that began at the start of his career, when he wrote intellectual film criticism, published his book, and wrote Taxi Driver not long afterward. In the interim, Schrader has confronted human chaos, sometimes embracing the toxicity of modern existence. First Reformed does much the same, although it’s more contemplative about Toller being on the brink of catastrophe. Through its transcendental form, the film plays like a prayer from an atheist and devout critic of humanity’s selfishness. Yet its resolutions flirt with horror, and they remain the most rewarding and contemplative kind. Schrader offers a text through which the viewer can explore their own beliefs about politics and religion, how they have abandoned the environment, and ask their own questions about the world today. He forces us to pause for self-reflection. First Reformed proves defiantly introspective for a culture that has stopped looking inward in favor of spewing out unthinking bile while imploring the audience to set aside its assumptions and engage in soul-searching.