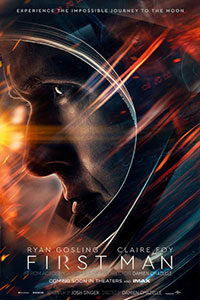 Damien Chazelle’s short career thus far has almost entirely focused on dramatizing characters who sacrifice their personal lives to serve their professional ambitions. Take Whiplash (2014), the director’s second feature about an aspiring jazz drummer who puts himself through physical and psychological torture, pushing himself to the brink to become the next Buddy Rich. Or the sparkling La La Land (2016), which featured Ryan Gosling and Emma Stone as a couple who form a perfect, charming romance, only to set aside their relationship to pursue his desire to become a jazz musician and her dream of becoming a Hollywood actress. First Man tells a similar story, although it’s one you’ve heard before. From the entrenched subjective perspective of Neil Armstrong, the film charts the progress of the U.S. in the space race against the Soviet Union, culminating with Apollo 11’s moon landing in 1969. Chazelle humanizes the “giant leap for mankind” from Armstrong’s point of view, considering how the pilot submitted himself to unfathomable dangers out of bravery, a sense of responsibility to the advancement of the human race, and perhaps something more personal.

The Apollo program, the technological advancements of NASA, and the lunar landing have been the subject of numerous films, from The Right Stuff (1983) to Hidden Figures (2016). Chazelle and his screenwriter Josh Singer based their film on James R. Hansen’s official biography, First Man: The Life of Neil A. Armstrong, published in 2005. Unlike a typical biopic, however, Chazelle and Singer have taken an intimate rather than historical approach, setting aside the familiar birth-life-death structure and forgoing the unnecessary exaltation usually involved in films about American heroes. Chazelle’s choice to focus on his character’s perspective instead of a pointedly nationalistic one has resulted in an absurd backlash against the film, despite the presence of American flags and patriotism unavoidably entrenched in the proceedings. Nevertheless, First Man resolves to consider the mental state of its protagonist by challenging the viewer to crack the Armstrong nut—a character whose steely quality forces us to consider whether he’s merely a remote human being or if he internalizes his otherwise extreme emotions for a greater cause.

Gosling is an ideal choice to play Armstrong, given his inclination toward emotionally guarded characters like those in Drive (2011) or Blade Runner 2049 (2017). Not long after the film opens, Armstrong and his wife Janet (Claire Foy) grieve over the loss of their two-year-old daughter, Karen, to a tumor in 1961. Afterward, Armstrong barely mentions her; instead, he throws himself into the NASA program, committing to every hazardous experiment and test flight, apparently to distract himself from the pain of his family’s loss. Time moves quickly, with months passing between cuts. Following Karen’s funeral, the next scene shows Janet pregnant, and the next shows their new child born. And regardless of Neil and Janet having two young boys to care for, he remains a somewhat absent father, aside from a few Malickian scenes of play around the house. Most of his time is spent at NASA, perhaps because he’s the tragic sort of American male from this era whose capacity for physics and rocket science far outweighs his ability to acknowledge his emotions. 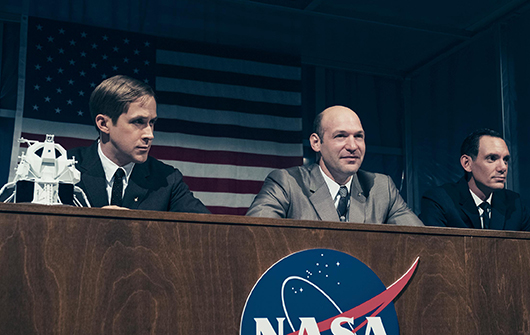 Armstrong’s need to incorporate his emotions completely beneath the surface is a quality shared by many of his compatriots in NASA, performed by an admirable ensemble of everyman actors: Deke Slayton (Kyle Chandler), Ed White (Jason Clarke), Gus Grissom (Shea Whigham), Mike Collins (Lukas Haas), Roger Pete Conrad (Ethan Embry), Jim Lovell (Pablo Schreiber), Roger Chaffee (Cory Michael Smith), and Gordo Cooper (William Gregory Lee). They each have a matter-of-fact quality to them. Only Corey Stoll’s Buzz Aldrin, whose ill-timed bluntness in several scenes is humorously tasteless, has some personality. Indeed, each man is hard-working, sort of dull, but a committed member of a team that carries out a mission they believe will advance both America and the human race. Foy’s character, by contrast, bears the unfortunate role of being a comparatively overemotional, rational-minded woman, present simply to break up the monotony of stoic men. “You’re a bunch of boys,” Janet yells at one point, exhausted by their lack of feeling in the face of such danger. “You don’t have anything under control!” But Chazelle and Singer are less interested in showing the emotional toll on these background characters than that on Armstrong, who suppresses it every time one of his fellow astronauts dies in an unceremoniously filmed accident.

Whereas Chazelle’s treatment of character is designed to keep us at a distance—aside from the presence of Foy’s speechifying Janet, the sole female role of any substance—his visceral use of form entrenches the viewer in Armstrong’s experience. Alongside cinematographer Linus Sandgren, Chazelle employs the grainy look of 1960s home movies throughout First Man, giving the material a faux sense of reality. Similarly, he uses subjective camera angles that put us in Armstrong’s seat, looking out of shuttle windows, spotting tactile details, and hearing the metallic vibrations of the rickety spacecraft around us. Chazelle’s observations underscore how the space-aged machinery used by NASA was not seamless futuristic technology. Astronauts were strapped into glorified automobiles comprised of metal fuselages that expand and contract in the atmosphere, representing a thin sheet of metal between Armstrong and oblivion. Everything shakes and vibrates during their launches, and it’s all held together by unreliable snaps and screws and belts, resulting in a jarring, intense first-person experience. Seeing the film in a theater where the audio vibrates your seat and causes your ears to ring is essential.

First Man’s probe into Neil Armstrong both pays tribute to and realizes the necessity of people who can internalize their rather profound feelings for a cause greater than themselves. Many of us in the ensuing, self-obsessed generations, or those who follow isolationist political ideologies, would find it impossible to set aside their personal identity for a cause that reaches beyond borders and seeks to advance humankind—hence the diminishing importance of the U.S. space program in subsequent administrations. Armstrong, though perhaps not an engaging personality, and harboring a chronic disregard for his family, is nonetheless given a moment at the end that defies history but offers a touching punctuative flourish onto the story, deepening everything that came before. And while Chazelle puts forth a harrowing film told in frequently incredible visuals, the intentional distance installed between the viewer and his characters means First Man works better on our physical rather than emotional responses.