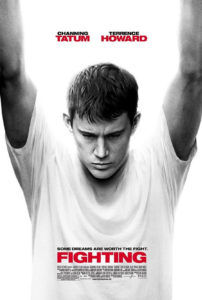 Movies like Fighting that glorify secret societies based in underground hand-to-hand combat tournaments contend that proving oneself must be accomplished through violence. Since this subgenre’s stars are usually muscle-bound specimens incapable of expressing themselves in any manner other than fisticuffs, we wouldn’t expect them to break into articulate oration to validate their ego. Of course, there are those rare occasions where nothing except a firm blow to the chops will solve your problems, and this movie tells such a story.

Streetrat Shawn MacArthur (Channing Tatum) has the silliest scam going on the sidewalks of New York City selling counterfeit Harry Potter books for $20, which makes no sense being that the real deal is usually cheaper. Nevermind that detail. When someone stupider tries to steal MacArthur’s fake crap, a fight breaks out and onlooker Harvey Boarden (Terrence Howard) recognizes Shawn’s obvious aptitude for throwing his fists real hard. Boarden offers MacArthur the chance to earn money in bare-fist boxing matches, the kind conducted in scummy alleyways. Eventually, Shawn pounds heads all the way up to fancy apartments as entertainment for the super-rich.

Harvey and Shawn are underdogs, and no one believes in them, which is exactly why everyone should. Shawn has a rowdy past, daddy issues, and an ongoing rivalry with his hotshot ex-college classmate Evan Hailey (Brian White), who presents the film’s final pseudo-title bout. The down-on-his-luck Harvey tries to reestablish himself among his big-time hustler friends Martinez (Luis Guzmán) and Jack (Roger Guenveur Smith), who think he’s a joke. Meanwhile, Shawn has eyes for the good-hearted waitress and single-mom Zulay (Zulay Henao).

Complete with hairless torso and expressionless features, Tatum’s inability to emote or annunciate make his performance barely tolerable, but he provides the lean physique requirements of the role. Howard’s high, breathy voice lends the appropriate desperation for his character, though the actor never makes Harvey more than the self-described two-bit hustler. These one-dimensional characters run their course seemingly without reason other than money and pride. And there’s only so much the cast can do to help, since evidently any semblance of their motivations wasn’t included in the script. We never understand why Shawn fights so passionately. Is it only for the money? If so, what will he do with his winnings? Why must Shawn win? What is it about winning that drives him so? The entire conflict, both inside the ring and inside Shawn’s head (if indeed there’s anything going on in there), has no point of reference beyond the very thinly described outline.

Director Dito Montiel—whose honest New York story A Guide to Recognizing Your Saints also starred Tatum and received almost universal acclaim in 2006—co-wrote the project along with Robert Munic (TV’s The Cleaner). The material seems beneath Montiel, who should’ve moved on to another rugged indie crowd-pleaser, but just right for Munic. Their product feels like your standard boxing drama that takes fighting for what you believe in quite literally. Determining what these characters believe in, and thus are fighting for, is another matter.

With more naturalistic characters than the sophomoric Never Back Down yet nowhere near Redbelt’s gravitas-laden narrative, even the lean title suggests that Fighting tries for substance in its simplicity but fails. It hopes to be a gritty tale of New York’s seedy underbelly, but exposes nothing we haven’t seen in a dozen or more formulaic fight flicks. The story never digs its way out of the boxing subgenre’s inherent hole. The fights are exciting, I suppose, however the remainder is so plodding that the action can hardly hope to make up for every other part of the experience that’s lacking.