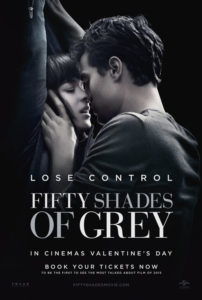 With much lower-lip-biting to cornball effect, Dakota Johnson plays the mousy Anastasia Steele (the resident Elizabeth Bennet), a virginal college student (fond of classical romances by Jane Austen no less). When she interviews Christian Grey (Jamie Dornan) for her college newspaper, she’s immediately taken by his steely, intimidating presence. Erudite and formal, the young billionaire runs an ambiguous communications company (where he only hires women who look like Robert Palmer dancers) and avows that he “exercises control in all things.” In addition to a few other warning signs, Christian grows fascinated with Ana and begins borderline stalking her. And perhaps because she’s inexperienced in such things, she’s charmed by his creepy attention. Then comes the moment when any sane person would walk away from his courtship: He asks her to sign a non-disclosure agreement before he touches her. Along with allusions to his “singular” sexual proclivities, the fact that he wants her to sign a contract, and she actually considers it, is part of what makes this an absurd fantasy. It turns out Christian likes to tie women up in his “playroom” and punish them. Though, he claims to enjoy such acts only if his submissives are getting as much pleasure from the experience as he does.

Nothing about the seemingly smart, certainly reserved Ana and her very normal life suggests that she would be game for a little S&M. So why, when all of the signs point to Christian having major issues, does she stick around? That question is never adequately answered in the film and remains glaring. And because of that, Fifty Shades of Grey is nothing more than surfaces (color-timed in muted, grayscale shades), polished up with just the right amount of not-too-out-there erotica that won’t offend mainstream crowds. Audiences witness hands tied, blindfolds on, feather tickling, light spanks, and whipping. Nothing too scandalous. Indeed, bondage has never been so boring or felt so commoditized. Each of these acts is filmed like a music video and set to pop music by, more often than not, Beyoncé (she contributes two titles to the soundtrack). There’s one sequence where each thrust is timed with a beat, and each beat coincides with a cut from one shot to another. And the nudity in these scenes is almost exclusively one-sided, with Johnson baring far more, and more consistently, than her male costar. But ultimately, these scenes are no more erotic than watching monkeys mounting one another at the zoo.

None of this would matter if interesting characters inhabited Fifty Shades of Grey, but there are none to be found. Questions about Ana’s motivations bother us until we remember she’s very inexperienced in relationships. To be sure, any self-respecting woman would have run far, far away from Christian at the first mention of an NDA, not to mention Christian’s later dom-sub contract. So what does she see in him? Christian is bland, robotic, but good-looking enough, I suppose. Without an interesting dimension beneath his exterior layer, the Irish actor plays him un-emotive from behind a rigid American accent. He’s broody and, as Ana observes on multiple occasions, unable to articulate his feelings. When she asks why he must punish her to achieve pleasure, he responds, “This is how I am.” How does such a poor communicator preside over a billion-dollar company? But because she’s naïve, she overlooks his utterly deficient personality in favor of his fancy cars, posh apartments, helicopter rides, and glider flights. Or maybe she just enjoys how he showers her with gifts: a first-edition copy of Tess of the D’Urbervilles, a new laptop, and an Audi. By the time Ana confesses her love for Christian, we cannot help but wonder what she’s fallen in love with—there’s nothing there.

Many have questioned the sexual politics and implications of the book and film. The material brings into question female submissiveness as it relates to gender roles throughout history. And you could argue that it perpetuates violent relationships against women (although she leaves him in the end, quite abruptly, suggesting that such relationships are not condoned by the filmmaker/author). However, debating these serious topics in relation to this material gives it too much credit. There’s nothing the least bit insightful or insulting about this product. It has been tailored for the lowest common denominator demographic, many of whom filled the theater during my screening. The largely middle-aged crowd of women whispered and giggled; their low hum of chatter barely subsided for the film’s 125-minute runtime. They were no more affected or offended by what was happening onscreen than they were during Twilight, seven years ago. Had Fifty Shades of Grey been NC-17 rated and really pushed the limits of mainstream sexuality in film, it’s doubtful that it would have been received with such widespread commercial enthusiasm. If there’s a dangerous sociological consequence to the film, it resides in how topics that should be significant are presented in such a fluffy way that, when left to its target audience, they can be damaging if only for the ignorance with which it’s received.

But Fifty Shades of Grey manages to be a non-issue and quite often boring, which is surprising, given the swell of passionate negative reception and controversy about the book in some circles. Outspoken feminists, authors, and news outlets grant the material far too much credit by suggesting it has any significant meaning (beyond supplying sexually bored readers and viewers with a look at fringe sexuality through a clichéd lens). To expend any energy getting mad about its possible but mostly nonexistent subtexts is a waste of time. For BDSM-brand controversy, seek out Tie Me Up! Tie Me Down! (1990), Bitter Moon (1992), The Piano Teacher (2001), Secretary (2002), or even Nymphomaniac (2014)—each of these films respects its audiences enough to at least attempt to provoke the viewer. Watching these other films, you might find yourself offended or pushed to the limit, even unable to watch. Others might find themselves turned on. For me, Fifty Shades of Grey accomplishes almost no reaction whatsoever, except for being so bland and programmed that it’s laughably dismissible. And where BDSM in cinema is involved, the film isn’t doing its job if it isn’t somehow stimulating.