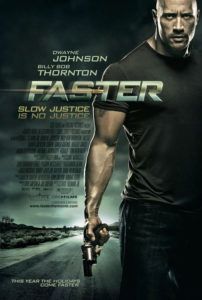 After Arnold Schwarzenegger passed the proverbial torch to Dwayne ‘The Rock’ Johnson onscreen in The Rundown, expectations were immediately raised and ultimately disappointed in the same moment. That was seven years ago, and since then Johnson has delivered an unending string of goofy children’s movies (The Game Plan, The Tooth Fairy) and other laughably bad career missteps (Doom). His action hero potential was wasted on raising eyebrows for his lingering wrestling fans and embracing his affection for live-action Disney movies. And while the occasional Kindergarten Cop is forgivable, Schwarzenegger knew that it was the Pedators and Total Recalls that made him a movie star. Not so with Johnson.

Now comes Faster, a bloody revenge flick in which the usually expressive personality of Johnson goes straight, even mechanical. While advertised as an actioner teeming with car chases and shootouts, the movie’s director George Tillman Jr. (2009’s Notorious) meanders in Kill Bill territory as he builds several characters on the path to (self)destruction. Not that Johnson does any real acting with the material given. The actor’s natural charm is reduced to marching about serious-faced, shooting down one of his resigned-to-death victims, and then marching to the next kill. It’s all very blunt and graceless, meant to have grittier and weightier significance appeal than your typical action yarn. But Tillman’s tone fails to resolve whether he wants his movie to entertain or engage, and therefore, at times, it does either both or neither.

The first shot of Johnson’s bulging, glistened muscles recalls so many 1980s action movies starring the likes of Schwarzenegger and Sylvester Stallone—yet in the same instant conveys the conflicted intent of the movie. Are we to concern ourselves with macho-ness of Johnson’s physique or with the dramatic gravity of his character, known only as “Driver”? Screenwriters Joe and Tony Gayton are even less focused, giving their three main characters no names, only title designations. Take “Cop”, played by Billy Bob Thornton; he’s a sympathetic-yet-crooked detective who shoots heroin between his toes when he’s not taking his son to little league games. Or there’s “Killer”, played by Oliver Jackson-Cohen, who’s a self-styled billionaire that loves being a hired gun almost as much as he loves his always-half-naked girlfriend (Maggie Grace).

These three characters intersect when Driver is released from prison after a ten-year stint for bank robbery. He was caught when his group was informed on by police snitches, and then summarily executed by those same informants. Driver survived and waited in prison with only revenge on his mind. When he’s released, he wastes no time tracking down the hoods behind his group’s murder and robotically executes them one-by-one. Given his lack of backstory and non-emotive behavior, it’s difficult to find anything which might lead the audience to sympathize with the protagonist. Meanwhile, Cop is hot on Driver’s trail, along with his reluctant partner, Det. Cicero (Carla Gugino); but they remain one step behind, as the sleazy Cop evaluates the importance of his broken family over his career. Finally, the self-obsessed Killer has been hired to take Driver down, but begins to ask himself if marriage wouldn’t be a better life, and so he promises that this will be the assassin’s ever-present “last job”.

Building these characters takes time, even if they are mere tropes whose formula arcs never had a chance of surprising or involving the audience. Yet, the movie ends without resolving many of the characters’ “issues”, which the script took considerable time to develop, so that when the credits begin to roll the audience feels robbed. As a result, Faster needed either fewer brains or more, and Tillman’s directorial flourishes (saturated colors and offbeat angles) don’t make up for what’s lacking. As a pure action movie, it will be a disappointment to fans of the genre; aside from a split-second knife fight and one or two shootouts, there’s not much here for escapist entertainment. As a dramatic revenge-thriller, the characterizations prove thin and cliché—nothing you haven’t seen before. The result amounts to a blunt-force assault that attempts to soften its blows with a hollow sense of solemnity, an effect that’s not likely to work on many viewers.