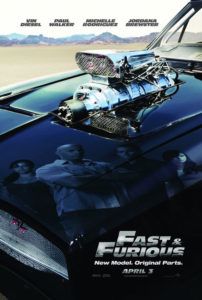 Dudes and babes and cars. If that’s all you’re hoping for from Fast & Furious, then you’re bound to have a good time. The movie has a surplus of each, which you probably know already, because you’ve seen the other movies in this franchise, and this one is a carbon copy of those. Why else would you be reading this review, unless you give a damn about how this latest sequel fares compared to the rest? Suffice it to say, expectations are met. That the result presents a critical equivalent to a head-on collision is irrelevant. Returning with the full cast from the original (and I use the term “original” loosely) and director Justin Lin of the third, this fourth entry in the franchise removes “the” from the title, a lazy but meaningful choice by the marketing department. The abbreviated title illustrates how the filmmakers kept all the plot elements from 2001’s The Fast and the Furious in place while just moving a few details around. This way, nothing that happens onscreen distracts from the procession of flashy cars and scantily-clad bimbos.

Dominic Toretto (Vin Diesel) is on the run from the law, seeking revenge for the murder of his girlfriend (Michelle Rodriguez), which he believes was ordered by a drug-runner named Braga. Undercover cop Brian O’Connor (Paul Walker) is after the same mark for the feds, this time trying to protect Dom from the law. But can Dom forgive Brian for being a stoolie so together they can take down the bad guy? Will Brian finally choose a side between cops and crooks? Does anyone care? The answers: Well duh. Sort of. And not really.

Familiar elements constant throughout the franchise are present here: Standard butt shots follow “hottie” garnish walking about turbo-charged cars, each more elaborately decorated than the last. Racers acknowledge each other with their universal sign of respect, that short straight-faced-man-nod which says, “I desperately want to be a badass, and you do to, so let’s race cars and overcompensate for whatever’s lacking.” Unintelligible, digitally-enhanced racing sequences and a scatterbrained camera frame gyrate every-which-way to make the action anything but comprehensible. Through it all, there’s enough noise to make you deaf, or at least wish you were deaf.

Certainly, you’ll daydream about stabbing something into your eardrums when Walker opens his mouth, delivering lines of atrocious dialogue in that vacant way only he can. He’s bested by the ever-empty Diesel, whose grunting passes as tough guy lingo. Not that you’re supposed to be listening to the dialogue; indeed, not when engines are humming and there’s popcorn to crunch. Who needs engaging discourse when there’re gravity-defying stunts and several gratuitous lesbian kisses to behold?

You’ll recall that for 2 Fast 2 Furious back in 2003, Diesel passed on reprising his role as Dom in favor of producing his own franchise entitled xXx, the sequel for which he also abandoned in favor of yet another franchise, this one an overblown sequel to Pitch Black called The Chronicles of Riddick, which failed miserably. This string of failures launched Diesel into dreck like The Pacifier and Babylon A.D., and then forced him into accepting much-needed paydays (see the last scene of The Fast and the Furious: Tokyo Drift). Now, as close to washed-up as an actor can get, yet desperate to regain his former potential, Diesel returns to the series that made him a star. After being too good for the franchise six years ago, he now needs it; if he doesn’t already have his tail between his legs, he should now.

Gearheads will continue to apologize for the lack of story in this series to embrace Fast & Furious, if only because they enjoy cars so much—there’s even a building-a-car montage that for car fanatics replaces the need for a sex scene. And after screening the film, they’ll no doubt head for the parking lot where, being wannabe muscle-car drivers, they’ll spin cookies, screech their tires, and then peel off to drive recklessly. All those fearful of such desperately manly displays, not to mention being run over, should avoid this sequel.