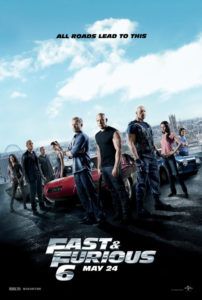 Fast & Furious 6 exists solely to bring about gigantic action sequences, such as a tank speeding down a freeway in the wrong lane or souped-up cars chasing a military carrier plane on a neverending tarmac. No matter how many cornball lessons about family unity writer Chris Morgan injects into the proceedings, director Justin Lin, who’s been making these movies since Tokyo Drift in 2006, still delivers a brainless mashup of gearhead fantasies: Engines purring on “sick” cars, CGI-enhanced street races through busy non-American locales (Spain and London here), muscular heroes throwing their fists into one another real hard, the camera trailing low behind bikini-bottomed bimbos, and physics-defying leaps from one moving vehicle to another. Lin and Morgan deserve some credit for at least trying to raise up the material with sappy melodrama, but their attempts are as empty as the perpetual expression on Paul Walker’s face.

During the opening credits, Lin cuts together a veritable clip show of scenes from the previous five movies, showing some of the more memorable moments therein. (Not one scene sparked my memory, though I’ve seen these movies before.) What we’re meant to remember is that now-retired international thief and street racer Dom Toretto (Diesel) once had a flame, Letty (Michelle Rodriguez). Remember her? We eventually learn that Letty has somehow survived her execution in Part 4 by a drug cartel goon, and now she’s conveniently an amnesiac and works alongside a different band of international thieves led by Shaw (Luke Evans). What’s the difference between Dom’s gang of thieves and Shaw’s, you might ask? Only a little thing called “heart.” Dom’s group is an extended family and sticks together through thick and thin; they even say cheesy prayers before meals. Whereas Shaw shows no allegiance to his people whatsoever. In one scene, Letty reports that one of Shaw’s men has died, and the super-criminal barely reacts, sparking whatever’s left of Letty’s former self to question his callousness against Dom’s more palatable family values.

Letty’s fate becomes a bargaining chip for Special Agent Hobbs (Dwayne Johnson, looking steroided to the max), who uses photos of her to convince Dom and his happily retired crew to return for the proverbial “one last job”—even Dom’s best buddy, Brian O’Conner (Walker), whose wife Mia (Jordana Brewster) has just given birth to their first child. Since family is everything to this crew, everyone agrees, and they’re quickly working alongside Hobbs, the cop who was trying to take them down in Fast Five. Hobbs is joined by no-nonsense Agent Riley, played by MMA fighter Gina Carano (from Haywire), and her presence leads to much-enjoyed fisticuffs between Carano and Rodriguez, a scene that just might be worth the price of admission. Whereas usually this franchise relies on “vehicular warfare,” there’s a heavy dependence on buffed-up actors bashing each others’ faces in. I could feel the viewing audience tweaking in anticipation for an inevitable showdown between Diesel, Johnson, and one of Shaw’s henchmen played by Kim Kold, a mammoth-sized bodybuilder. The result is like a WWF match without the ring.

In an effort to evoke an emotional response, the filmmakers have exploited a family element in almost every character (the important ones, anyway). Dom’s invested because of Letty; Brian goes ballistic when his wife Mia is kidnapped by Shaw; the lovers Han (Sung Kang) and Gisele (Gal Gadot) have their romance tested by danger. Meanwhile, Dom’s girlfriend Elena (Elsa Pataky) remains on the sidelines, curiously unfazed by her boyfriend abandoning her for his believed-dead ex. The only characters not emotionally invested are Roman (Tyrese Gibson) and Tej (Chris “Ludacris” Bridges), the unfunny comic relief whose antics are achingly tiresome. This excess of good guys is whittled down some through the course of the movie, but not enough. Far more should have died, and those who did die shouldn’t have. But it’s all about the family unit, which is preserved by the second-to-last scene. Wait a few moments after the screen goes black, and you’ll see an early teaser for Part 7 that borrows a cue from The Avengers, hinting that the next movie’s baddie (played by The Transporter himself) is even more deadly than Shaw.

Turbo-charged popcorn thrills and escalating action sequences will please devoted audiences. Fast & Furious 6 will make millions, and Universal’s franchise will continue onward for at least one more movie, but probably more. Rows back, I could hear teenage boys whispering about this or that car, or how one character is related to another in the Toretto-O’Conner family tree. Their enthusiasm for the material reminds one of Star Wars fanboys or a “ladies’ night” screening of a Sex and the City movie. What becomes apparent is how this fifth sequel to the 12-year-old franchise starter The Fast and the Furious has made good use of what came before by transforming motor-brained nonsense into a soap opera. For this, the filmmakers are recognized, as they’re aware of their lowbrow core audience, and yet they try to enhance the material beyond its limitations. But there’s still the problem of the inane dialogue, laughable performances, and predictable plotting that has been characteristic of these movies since the beginning. Garnishing a candy bar with some candlelight and fine dinnerware and calling it a gourmet dessert isn’t going to fool anyone, nor will pretending Fast & Furious 6 is anything more than loud, mindless entertainment.