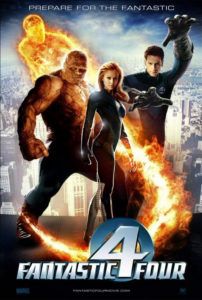 Released two years after X2: X-Men United, a year after Spider-Man 2, and the same year as Batman Begins, a silly comic book movie like Fantastic Four is insulting. Somehow, amid the last few years of prime comic book movie greatness, 20th Century Fox saw fit to make a mindless superhero picture somewhere between Street Fighter with Jean-Claude Van Damme and The Phantom with Billy Zane. I mention cheesy casting for a reason. Fantastic Four’s witless screenplay is made worse by the über-annoying Chris Evans as Johnny Storm, aka The Human Torch. Evans single-handedly sucks dry any integrity this film might have had with every line his self-satisfied character speaks. And then there’s Julian McMahon’s performance as Fantastic Four archnemesis Dr. Doom. Star of Nip/Tuck, McMahon doesn’t have the intimidating voice necessary to evoke a character with a metal mask and a name like Doom. But wait, I’m getting ahead of myself…

Slightly altered from the Marvel comic, the screen story begins with a crew of five heading up to a space station to conduct an experiment. While there, they’re hit with a radiation cloud that alters their DNA. In the comic, however, there was no radiation cloud; “cosmic rays” were the original cause (apparently cosmic rays are just too implausible for film—radiation cloud: much more logical). After the accident, Reed Richards, aka Mr. Fantastic (Ioan Gruffudd), has the ability to stretch his rubbery body to any length. Sue Storm, aka The Invisible Woman (Jessica Alba), can make herself invisible and create invisible force fields. Johnny Storm, Sue’s brother, who I already mentioned, is self-explanatory. And Ben Grimm, aka The Thing (Michael Chiklis), has super-strength and a body made of orange rock.

Every character deals with their changes differently. Johnny loves the celebrity it brings him; Richards researches the problem to reverse the process; Sue helps Richard, while also falling in love with him; and Ben’s wife leaves him after finding out she’s now married to a boulder. There’s a pathetic effort to make us care about the “emotional journey” brought on by suddenly having superhuman powers, including Ben meeting a blind woman that doesn’t care about how he looks because, get it, she can’t see his ugliness (except Ben remains an immovable grump, so you’ll be wondering why she sticks around). These cracks at feeling are ineffective and flat, since within five minutes of the film’s opening, the crew finds themselves in space getting zapped. How are we supposed to care about changes in characters who we didn’t know in the first place?

Also exposed to cosmic-whatever is Victor Von Doom, a billionaire madman with his heart set on Sue. Doom’s DNA changes too, although I’m not so sure about his powers in the movie. In the comic, Dr. Doom’s greatest ability was his brainpower, using it to construct new machines to defeat the Fantastic Four. Not the case in the film, because, you know, having a villain with brains would have been a good idea. And Fantastic Four avoids all things good… Here Doom has a metal alloy skin and shoots flashy, unidentified rays from his hands—if that means anything to you. Not only is McMahon astonishingly static in the role, the writers failed to make him a true rival for the film’s hero team. Dr. Doom on film is no Magneto, nor does McMahon have the screen presence of Ian McKellen.

There’s one battle between the Fantastic Four and Doom at the finale, and it’s as predictable as touching a hot stove. For being a superhero movie, hero vs. villain conflict is suspiciously absent. Instead, the film turns the heroes into comedians, and we’re forced to endure gags barely worthy of Brodie from Mallrats. I’m not sure why the producers chose Tim Story to direct; his resume includes Taxi with Jimmy Fallon and Barbershop, two movies that couldn’t be further from big-budget blockbuster successes. His narrative treatment comes across as jokey like a Saturday morning cartoon, which, come to think of it, the Fantastic Four had in the mid-1990s. The cartoon is unquestionably better, and it was a shoddy cartoon. Marvel’s success with 2000’s X-Men brought about confident franchises like Spider-Man, and regrettable stinkers like Daredevil, Hulk, and Electra. Odds are in the movie biz, the more you try, the more you fail. With Fantastic Four, Marvel failed. Horribly.