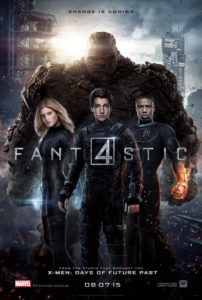 All build-up and no pay-off, Fantastic Four attempts to reboot the popular Marvel superhero team with new actors, a fresh young director, and a studio whose rocky track record with Marvel properties doesn’t promote confidence. Originally conceived in 1961 by Stan Lee and Jack Kirby, the foursome family of superheroes predates Spider-Man, the Incredible Hulk, the X-Men, and the Avengers, and remained unique because their identities were known to the public. As the story goes, after being struck with cosmic rays, Reed Richards, aka Mr. Fantastic, can stretch like rubber; Reed’s wife Sue Storm, aka The Invisible Woman, can (you guessed it) turn invisible; Sue’s brother Johnny, aka The Human Torch, lives in a flame and can fly; and their friend Ben Grimm, aka The Thing, is a bruiser made of rock. Their family dynamic and openness are what made them interesting, but little of that dynamic, or even their powers, is evident in director Josh Trank’s Fantastic Four.

The team’s distinctive qualities have yet to be adequately captured onscreen, even after three iterations. During the 1990s, Marvel sold the rights of several superheroes to resolve their financial problems. This led to a rarely seen 1994 feature produced by Roger Corman and directed by Oley Sassone, which makes the subsequent efforts look like Citizen Kane by comparison. Then again, enduring the jokey, absurdist nonsense delivered in Fox’s Fantastic Four (2005) and Fantastic Four: Rise of the Silver Surfer (2007) directed by Tim Story, makes the Corman version seem like comparing garbage to refuse. Regardless of their modest box-office success, Fox wisely chose to reboot the franchise in the vein of The Amazing Spider-Man—which is to say, the reboot features a younger brand of superhero and ultimately will need to be rebooted all over again.

Structured much like Trank’s slick debut feature Chronicle (2010), a found-footage story where a bunch of kids develop superpowers, Fantastic Four is all about exposition and discovery—but not of superpowers. Instead, the majority of the film’s rather short 100-minute runtime is spent dwelling on the elaborate science project that will inevitably grant the quartet their abilities. “Slow-burner” doesn’t quite summarize the tantric method employed by Trank and his fellow screenwriters Jeremy Slater and Simon Kinberg. Their story begins when boy genius Reed develops a teleporter with the help of his motorhead friend, Ben. Cut to his high-school years, where Reed (Miles Teller) is recruited by Dr. Franklin Storm (Reg E. Cathey), leaving Ben (Jamie Bell) behind at his family’s junkyard. Alongside his adopted daughter Sue (Kate Mara) and need-for-speed son Johnny (Michael B. Jordon), Dr. Storm wants Reed to help finish an inter-dimensional teleporter started by the angsty Victor Von Doom (Tony Kebbell), who hates the world because the script tells him to.

For much of the runtime, characters stare at computer screens and weld things we do not understand. Their efforts prove successful and their resultant machine can teleport both inanimate and organic matter to another dimension, someplace called Planet Zero. But project overseer Dr. Allen (Tim Blake Nelson) refuses to allow the four scientists who created the teleporter to use it—that’s a job for NASA. In a fit of drunken posturing, Reed, Johnny, and Victor call Ben over and the four of them head to Planet Zero to make history. Instead, they lose Victor to a green energy pool. Sue brings them back before things prove too disastrous, but not before she and the others gain some new powers courtesy of Planet Zero. Over the course of the next year, the soon-to-be heroes learn to master their powers for Dr. Allen’s government goon-squad. At first, Reed refuses and goes into hiding, but he’s soon captured and brought back, forced to help repair the teleporter against his will. Once they’re ready, the foursome learns they must return to Planet Zero to stop an evil plot by Dr. Doom, who apparently survived and devoted himself to destroying Earth.

Conventional doesn’t begin to explain the banality of the plot. Dr. Doom, one of Marvel’s most enduring and imposing villains, has been reduced to a whining, power-hungry monster bent on destruction. And then he’s disposed of just as quickly as he arrives. The heroes remain one-dimensional characters, regardless of the script’s attempt to add layers. Both the script and Trank’s direction seem to feel that putting these characters onscreen is enough, whereas the film’s copious time spent building machines and looking at computers should’ve been replaced with character development. As a result, the promising cast is wasted, particularly Mara and Bell. The former spends all of her time listing to music in her earbuds and staring at patterns on screens; the latter, Bell, one of the more talented and intense young actors around, has a few scenes before he becomes The Thing, and then his voice is replaced with a badly synthesized gruff sound. Teller, whose talent was on full display in last year’s Whiplash, doesn’t have much to do beyond science stuff. Jordan plays Johnny Storm as predictably cocky. And Kebbell is wasted looking moody. Maybe if there was more to this story than an elaborate science project, the film could have used its talented cast.

Perhaps there was once more to Fantastic Four. Trank recently posted (and then quickly deleted) on Twitter, “A year ago I had a fantastic version of this. And it would’ve received great reviews. You’ll probably never see it. That’s reality though.” Trank was also scheduled to shoot a Star Wars spinoff for Disney but left the production, saying he wanted to make something away from the studios; elsewhere, sources claim Trank’s erratic and temperamental behavior on the set of Fantastic Four got him fired. Whoever is responsible for the dull and lifeless quality of Fantastic Four (likely a combination of Fox and Trank) has wasted a fine opportunity to explore these characters, as well as deliver an above-average, or even watchable adaptation of this Marvel property. With lackluster special FX, joyless action, a dark visual presentation courtesy of d.p. Matthew Jensen, and a plot worthy of the 2005 or 2007 cast, this new version is devoid of any vitality. Literally darkening the color palette with black costumes or blue-and gray-filtered saturations doesn’t add gravitas to the story. But maybe Trank has an alternate, 140-minute cut somewhere out there in which his characters live and breathe, or have something to do instead of just following the orders of their comic book movie tropes. Still, if one has to choose, Trank’s film is the best Fantastic Four yet, which isn’t saying much. Another reboot can’t come soon enough.