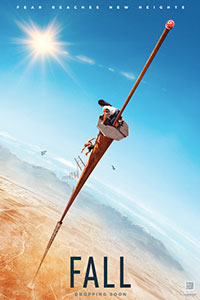 German film theorist Rudolf Arnheim once noted that cinema has the unique ability to produce phantom senses. A filmmaker makes aesthetic choices to access our vision, which causes our brain to create false sensory impressions, such as a smell or bodily reaction. Fall would make a terrific case study to explore this phenomenon. The movie taps into our involuntary physiological response to heights. The story is about two extreme climbers trapped atop the decommissioned B67 TV tower, one of the tallest structures in the US. They spend most of the 107-minute runtime at risk of falling to their deaths, clinging to rusty ladders, dangling with a tenuous grip, and looking down from a small platform 2,000 feet in the sky. Our stomachs drop and spines tingle while watching their predicament unfold—a familiar feeling among those who’ve ever peered over a cliff or instinctually looked down from a high place. Director Scott Mann’s minimalist feature employs an effective visual technique to reproduce the impression and fear of falling. If the clichéd storytelling and characters leave much to be desired, Fall at least makes us squirm and gasp in our seats.

In a traumatic opening reminiscent of Cliffhanger (1993), Becky (Grace Caroline Currey) and her husband Dan (Mason Gooding) climb a steep rock face with their daredevil friend, Hunter (Virginia Gardner). When Dan falls to his death in a freak accident, Becky spends the next year grieving and inconsolable. She has spent months listening to Dan’s voicemail message on repeat in her apartment, which is littered with empty booze bottles and pizza boxes. Although her dad (Jeffrey Dean Morgan, appearing all-too-briefly to give the movie some cred) tries to snap Becky out of her crippling grief, it’s Hunter that convinces Becky to start climbing again and conquer her fear and despair with an appropriate challenge—the aforementioned tower. Hunter has since become a paid influencer who travels worldwide to complete extreme climbing challenges. She hatched the idea of climbing the tower for Becky, expecting the ascent and descent to take no more than a few hours. But the tower’s unreliable rungs and loose screws have other plans for them. Just after they reach the top, the ladder detaches, and they become stranded with no way down.

According to the press notes, Mann and his co-writer Jonathan Frank originally conceived the idea for a short film series that fell through. Enthusiastic about their concept, they expanded the premise into a feature. Their dramaturgy relies on banalities, but their visualization is effective. Spanish-born cinematographer MacGregor, who shot 2019’s Vivarium, captures the action on-location at Shadow Mountain in California. The production used actual towers of various sizes, the tallest being 60 feet, requiring the actors to be comfortable climbers—even if the actual height was much lower than the screen story suggests. The difference is rendered with CGI, which is occasionally noticeable and spoils the illusion. As a result, most of Fall delivers a convincing feeling that Becky and Hunter could plummet at any moment. Besides the elevation, the characters also endure the usual conflicts of a stranded survival movie, including a shortage of food and water, desperate attempts to acquire help, and resident predators—a nasty kettle of vultures. But curiously, the filmmakers don’t address how Becky and Hunter haven’t been sunburnt to a crisp after a couple of days atop the tower.

Although most scenes involving their attempts to problem-solve their way out of the situation (using a flare, phone, and drone) prove compelling, they arrive here after a series of laughably bad choices that may leave the viewer questioning whether the leads are making intelligent choices (they are not). Fall is the kind of movie that makes you want to shout “What are you doing?!” at the screen. Hunter’s interest in safety is nonexistent and a constant source of frustration. Worse, the Hallmark-worthy interpersonal conflicts feel trite. While stranded up there, Becky and Hunter deal with their respective loss and secrets about their relationship. Becky also spends a lot of time watching wedding videos and looking at old pictures on her phone, leading to questions about her late husband. The predictable turns, including an absurd third-act twist, play like soap opera developments, suggesting there’s a much simpler survival story here that runs about 20 minutes shorter. What’s unfortunate is that Mann’s earnest treatment of the drama has a self-seriousness that doesn’t land as intended.

Still, any movie that can cause a phantom falling sensation suggests there’s some skill behind the camera. Throughout Fall, I noticed my guts churning, and I even felt something like vertigo at times. The way the camera moves around the tower and peeks over the rickety grate at the top leaves one dizzy, but so do the overwrought characters. Currey and Gardner do their best with what the screenplay provides them, the former often bawling, the latter telling her to buck up. Overall, the setup is 47 Meters Down (2017) in reverse. Despite its familiar scenario, I may have been able to ignore its frequent dialogical platitudes and stale dramatic beats if not for the unnecessary twist mentioned above. Disappointing as a whole, Fall nonetheless contains a few memorable sequences that could justify a casual viewing. But don’t expect to feel much beyond some unsteadiness.