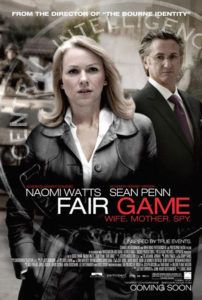 Attempting a clear depiction of what has been little else except misinformation and distraction from the real point, Fair Game dramatizes a scandal of worldwide proportions. It tells the story of CIA agent Valerie Plame and her husband Joseph Wilson, and how they became patsies to divert the media’s attention away from the U.S. government’s falsification of crucial intelligence that led the country into war. Amazingly, it uses actual names of all the principals involved with documentary authenticity and attention to detail, telling an engaging story that humanizes a politicized situation otherwise capable of inciting outrage among its audience.

After the Bush administration makes false claims that Iraq is developing Weapons of Mass Destruction, Joseph Wilson (Sean Penn), a former ambassador to Niger, stridently proclaims that their intelligence is based on his report, but that his report indicated there was no way Saddam Hussein purchased the nuclear materials suggested by the White House. In response to Wilson, Dick Cheney’s minion Scooter Libby (David Andrews) makes sure the CIA status of Wilson’s wife (Naomi Watts) is leaked to the press. The media hounds Wilson when they discover that Plame suggested her husband go on his fact-finding mission, but ultimately forget that his report proved the White House was lying.

Meanwhile, Plame’s career is ruined; the CIA turns its back on her, and friends suddenly feel that she’s not the person they thought they knew. Her cover blown, a number of active operations in various countries are shattered, leaving promises gone unfulfilled and lives needlessly lost. Watts plays Plame as a composed agent, seemingly incapable of being phased by the situation until it affects her family and becomes too much to bear; when she breaks down, she begins to fight back. Penn plays Wilson as an idealistic fighter throughout, determined to take on the Bush administration no matter how impossible the battle. The performances are strong, but such roles were handled with more dramatic intensity in Rod Lurie’s Nothing But the Truth, a fictionalized version of the same story.

Politics can’t help but figure into your response to the film, the most significant question being: What do you believe? If you side with the opinions of the filmmakers, which I do, then you maintain that there were no WMDs, both the CIA and the White House knew this to be true, but the Bush administration ignored this evidence because, spun the right way, certain facts would support what they believed was a necessary war. On a more basic level, the film suggests that the White House lied and Americans went along with the lies because, well, it was too late to change our minds. Once the deed was done, we could hardly back out (at least, that’s what we tell ourselves). So a few players involved were convicted of crimes for which they were summarily pardoned. But really, the administration was never fully held responsible for the lies they told.

Based on books by Plame and Wilson, the screenplay by Jez and John-Henry Butterworth uses clichéd domestic scenes to offset the grand political concerns, but these scenes never balance out. As a pure drama, the film might be considered only mediocre in its impact, whereas the film doesn’t soapbox with political indictments either. The information is presented in a bland docudrama style with little cinematic flourish. Pairing Plame’s family life with the scandal, director Doug Liman (The Bourne Identity) attempts to at once strike emotional chords and point fingers, but fails to incite the kind of response he was no doubt hoping for. The viewer exits the film troubled, but not outraged—which is how we should feel after learning about our government lying to us.