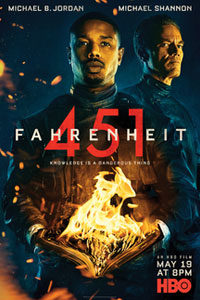 In our present culture, where the government maintains a level of control in part through instilling media suspicion and increased talk of censoring—or at least defunding—the arts, Ray Bradbury’s novel Fahrenheit 451 resonates with alarming prescience. First published in 1953, the book has long been required reading for young students, and with good reason. Every few years, the right attempts to enforce censorship or limit human liberties, and the Culture War heats up, once again revealing Bradbury’s text as a germane work of literature. An updated film version would seem essential for today, as François Truffaut’s rather good adaptation from 1966 has been largely forgotten or dismissed among cinephiles. However, HBO’s production, spearheaded by writer-director Ramin Bahrani, has neither the scope nor the subtlety to effectively translate the book into a vital futurology. The poor adaptation by Bahrani and co-writer Amir Naderi makes transparent and graceless connections to modern-day dogma, including anti-intellectual rhetoric from the American president and social media culture, leaving the story’s allegorical implications barbless and obvious.

Bahrani has been a champion of small humanist films about forgotten corners of society, such as Man Push Cart (2005) and Chop Shop (2007), while his political underpinnings could never be called understated. His 2015 feature 99 Homes, about a group of real estate goons who evict people from their past-due houses, unmistakably addressed with its title the economic divide between the 1 percent ruling class and the remaining 99 percent. The resulting melodrama was no less overt. His take on Fahrenheit 451 similarly carries its commentary like a sandwich board. The story takes place in a dystopian future where firemen serve the state by burning all sources of expression (books, paintings, music, etc.), while crowds nearby chant, “Make America burn again!” The future subsists on the notion that knowledge equals pain and, to ensure happiness, The Powers That Be have resolved that ignorance is bliss. But it’s really about control. To be sure, cooperative citizens must plugin to the “Nine”—the future’s inexplicable name for the internet—and take regular doses of brainwashing eye drops to achieve a sense of happiness. On the margins, though, a small band of rebels endeavors to preserve centuries of human knowledge and creation.

Michael B. Jordan stars as fireman Guy Montag, whose training under Captain Beatty (Michael Shannon) has outlined a promising future in the Cleveland “Salamander” Fire Station 451. Together, they raid the homes of rebels, called “eels” for some unspecified reason, in search of books filled with those pesky ideas, and burn them. Beatty explains that books and other forms of art contain “insanity” and chaotic thinking, which leads to suffering. As firemen, their job is to preserve a happy and orderly society, and for their efforts, they’re treated like celebrities by a drank-the-Kool-Aid public. Of course, Montag begins to question his ideology after he witnesses an eel (Keir Dullea) claim that everything people have been told about firefighters is false. (Wait, Benjamin Franklin started the first fire department to stop fires?) This, along with cornily fragmented memories of his childhood about his reader-father, leads Montag to seek out a rebel informant, Clarisse (Sofia Boutella), who teaches him the pleasure of reading in an undercooked romance.

In adapting the novel, Bahrani omits characters like Montag’s over-medicated wife from the proceedings, leaving the protagonist rather two-dimensional, and his transition from firefighter to rebel somewhat unjustified within the film’s drama. He’s blindly and passionately devoted to his cause at first, while his conversion, instigated with a sudden bout of tolerance, seems to come from nowhere. The director also sends mixed signals about Beatty, who clearly has been tempted by books, particularly poetry—alone at night, he writes haikus and then burns them—but doesn’t give the character a distinct arc. Both Jordan and Shannon elevate the writing with their performances, although the characters remain lacking. The film clocks in at 101 minutes but needed another 15-20 minutes to develop Montag and Beatty, as well as instill its themes in more covert ways.

Moreover, Bahrani has no experience in the science-fiction genre; he’s most comfortable in gritty, street-level drama, and it shows—his depiction of the dystopic future amounts to superficial world-building. Cinematographer Kramer Morgenthau, an HBO regular on shows like Boardwalk Empire and Game of Thrones, employs dramatic shadows and lens flares to give the film a sci-fi look, complete with souped-up firetrucks and omnipresent drones. Production designer Mark Digby, who worked with Alex Garland on Ex Machina (2014) and Annihilation (2018), lends the material a deceptively big-budget appearance, injecting animated social media avatars and emojis whenever and wherever possible. But one suspects the budget was quite small, as repeated helicopter shots of the Cleveland skyline, with CGI animations projected onto skyscrapers along with Big Brother-like news bulletins from the state apparatus, are overused filler in the mise-en-scène.

Perhaps the silliest, most nonsensical inclusion is the film’s McGuffin—a rebel device called OMNIS, which will save all human knowledge and artistry by encoding the information into DNA. Alternatively, the book’s last hope amounted to rebel characters who memorized books word-for-word, and Bahrani’s version includes those living books here too. But the OMNIS, eventually injected into a bird for puzzling reasons (perhaps a nod to Bradbury’s passages about the Legend of the Phoenix from the novel), leads to such an abstract and ambiguous finale that only furthers the film’s unimpressionable quality, from its underdeveloped characters to its blatant polemic. About a decade ago, writer-director Frank Darabont (The Shawshank Redemption) sought to adapt the material with Tom Hanks as a star. The production fell through, but undoubtedly, Darabont would have given the characters and commentary room to breathe (he’s known for intricate characterizations, thoughtful book-to-film adaptations, and acidic commentaries on the lows of humanity—just watch The Mist). Bahrani’s heavy-handedness robs Fahrenheit 451 of its potency, which is unfortunate, as Bradbury’s story proves achingly imperative today by reflecting how governments instill control.