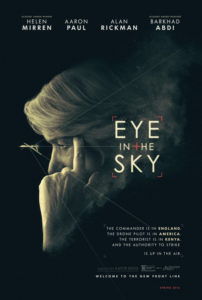 Here’s a philosophical experiment: Imagine you had the chance to stop the recent terrorist bombing in Brussels. You’re a drone pilot and you have the terrorists in your sights, watching as they prepare their nail bombs. But in order to take them out before they carry out their three attacks, which claimed the lives of 32 civilians and tourists, you have to consider the collateral damage. The suicide bombers are isolated in such a way that only one innocent will be killed if you pull the trigger. The bystander whose life resides in your trigger finger is a small girl, innocent and oblivious to the terrorists nearby. The question you must ask yourself is this: Is the life of one innocent worth saving 32 or more lives later? It’s a frightening question to which there’s no right answer.

Through a tense, nail-biter scenario like the one outlined above, Eye in the Sky examines the political, legal, moral, and humanist consequences of drone warfare. The film’s director Gavin Hood tackled similar material with Ender’s Game, being about children deceived into fighting a war from virtual reality consoles. However, since that 2013 release boasted sci-fi escapism first, thoughtful commentary second, the distinctions are many. More apt are comparisons to Hood’s disjointed soapbox piece Rendition (2007), which failed to provoke otherwise important conversations about the implications and effectiveness of U.S. torture practices. Unlike his earlier work (which includes Tsotsi and the abortive X-Men Origins: Wolverine), his latest delivers an exciting situation that cannot help but engage the audience, as well as draw out post-screening discussions about the benefits of drone warfare and the potential costs in collateral damage and human decency.

Last year, Andrew Niccol’s sobering character study Good Kill featured Ethan Hawke as a drone pilot grappling with the moral implications of his detachment, or lack thereof, from the lives he’s taking halfway around the world, safe in his Los Vegas console. Eye in the Sky considers a much larger canvas than the warfare itself, from the politicians approving drone missions to the undercover agents on the ground scouting them. The story begins in London, where Lieutenant General Frank Benson (Alan Rickman) and other officials sit down to observe a mission to capture a radicalized young British woman (Lex King) who joined Al-Shabaab militants in Nairobi. Overseeing the mission, the steely Col. Katherine Powell (Helen Mirren) wants the radicals—many of them on their Most Wanted List—killed once she realizes her target is assisting two men suit-up for a potentially devastating suicide mission. Benson agrees and consents to Powell’s request for a U.S. drone strike to take them all out. What follows isn’t a quick push-of-the-button demonstration of efficient modern warfare; rather, Powell must get approval from her superiors, and their superiors. Indeed, the plot thickens.

The depiction of these superiors, and the interruptions that delay their decision-making process, brings an almost satiric quality to the film. U.K. foreign secretary James Willett (Iain Glen) attends an arms fair in Singapore, only to catch a nasty bout of food poisoning. The U.S. secretary of state must be pulled away from a Beijing ping-pong tournament to approve the attack. Beyond these momentary asides designed to show us how complicated, and in some ways absurd, such bureaucracy can be, there’s real dramatic heft to the film. U.S. based drone pilot Steve Watts (Aaron Paul) notices a young Kenyan girl selling bread on the street, and he demands The Powers That Be reconsider the mission to avoid killing any civilians in the target area. As officials worry about the social media, legal, and political ramifications if the attack kills the innocent girl and is loaded onto YouTube, Watts worries about the human cost. For his U.S. superiors, however, there’s no question at all—they even seem annoyed when the British government asks for authorization given the circumstances.

Hood creates vast tension courtesy of editor Megan Gill’s well-timed cuts between the various parties involved, the best of them coming back to Mirren’s impatient booming, and Rickman’s increasing annoyance at the slow political process. The original script by Guy Hibbert (Five Minutes of Heaven) earned the World Cinema Screenwriting Award at the 25th Sundance Film Festival for good reason. Hibbert creates breathless tension bouncing between these characters and the views they represent, from the collected morality of Watts to the increasing desperation of Powell, down to a Somali operative on the ground (played by Captain Phillips costar Barkhad Abdi) using micro-tech to spy on the targets. Meanwhile, slick lensing by Haris Zambarloukos (Thor, Jack Ryan: Shadow Recruit) makes fine contrasts between the real-life locations (shot in Hood’s home of South Africa) alongside the cold, confined briefing rooms and operational consoles.

Next to the surface-value character study in Good Kill, Hood’s film delivers a comprehensive procedural of a drone attack that demands a thoughtful response. Weighing notions of legal coverage, the rules of engagement, and propaganda wars, the film doesn’t come down on any particular side of these arguments. Nor does it preach to the audience about its own views, guiding us through the story to come to the filmmakers’ assessment of the material. Powell and Benson have certain views, while the officials and Watts have theirs. Rarely does a “discussion film” (like Lions for Lambs, or the aforementioned Rendition) resist answering these questions and still feel satisfying. Eye in the Sky is an exception. It’s also exceptionally well-made and acted, and an effective topical entertainment that is seemingly straightforward, but presents a series of questions that the strong cast debates throughout, and you’ll debate long afterward. Lastly, it should be noted this is the last screen appearance of Rickman, who reminds us what an affable, noble screen presence he was.