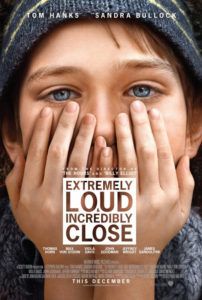 Extremely Loud & Incredibly Close has a lofty ambition—to bring a sense of acceptance and emotional cleansing to the tragedy that was the 9/11 attacks. Based on the novel by Jonathan Safran Foert, the film goes about its objective by placing our pain in the hands of a little boy named Oskar Schell, played by Thomas Horn, a former Jeopardy winner. Young Oskar’s high-energy, borderline Aspberger’s persona finds him dwelling on various factoids and running about New York City in search of the answer to a mystery about his father, who was in a World Trade Center tower when they came down. Oskar is articulate and clever beyond his years, but he has trouble reconciling his emotions more so than most. He says whatever comes to mind, however hurtful or insensitive, however random. After Reign Over Me, this is the second of the few films about 9/11 in which the protagonist manages some kind of emotional problem that makes him ill-equipped to deal with the tragedy itself, as if that wasn’t enough.

The details of the story are found in very human characters, but combine for a very whimsical and manufactured plot. The Schell family is a loving unit. A modest jeweler, Thomas (Tom Hanks) engages his son in discovery missions and wordplay games that have clearly made Oskar into a bright boy, while Linda (Sandra Bullock) remains somewhat absent throughout most of the film. A year after the death of his father, Oskar finds a key in a small envelope in his father’s closet. The word “Black” is written on the envelope. Assuming it is a name, Oskar is determined to find out what lock this key opens, as it may possess some crucial detail about his father. He systematizes a list of people with the last name “Black” in the five Burroughs and, hiding it from his mother, resolves to visit everyone to establish if they somehow knew his father, or can tell him what this key might open. Though he visits the first several alone, he’s soon joined by The Renter (Max von Sydow, fantastic), a mute lodger staying with his grandmother (Zoe Caldwell).

Throughout most of the second act, the adventures of Oskar and The Renter are rather delightful, as it slowly becomes apparent that there’s a greater connection between the two. The Renter faced his own tragedy in World War II, and that lingers with him for all time. Could this be where Oskar will end up in another seventy years, damaged beyond repair? Or will Oskar’s unique (and seemingly chronic) appetite for things to make sense logically drive him to a resolution? Much like 2011’s Hugo, the film follows a child with a key looking for answers about his father, but the story leads somewhere else entirely. However, unlike Martin Scorsese’s film, where Oskar ends up isn’t as transcendent; this expedition is more about a journey of self-discovery, whereas Hugo was both about the journey and the destination. Getting the best of both worlds is far more satisfying. Also, Hugo used the storybook-like scenario to greater effect, creating a world in which the fanciful curiosity of a child is more about the wonder of discovery than a cause for concern.

Indeed, we spend much of the film questing Oskar’s absent mother, how she could allow her son to visit strangers throughout the city while on the face of it, she never makes an effort to connect with him. Of course, she eventually shows up at the last minute to put our doubts about her parenting to rest in a teary scene, but in this case knowing how she felt all along would have enhanced the experience as a whole. Eric Roth, who penned two other sweeping films about characters searching for something (Forrest Gump and The Curious Case of Benjamin Button), attempts to create a puzzle that never quite fits into a complete picture. The film’s structure is its greatest downfall. It uses an endless amount of flashbacks to 9/11, some from Oskar’s memory, some from his imagination, and some just ways to orchestrate the audience’s reaction. Fortunately, the filmmakers avoid recreating the details of the actual event, but the emotional reality of the incident is felt.

In his debut performance, young Horn (who looks like a cross between Elijah Wood and Smeagol) occasionally shows impressive range; other scenes of his extreme precociousness become tiresome and even annoying. In his wordless performance, Von Sydow, that living legend from The Seventh Seal and The Exorcist, steals the picture in his loaded gestures and quiet onscreen authority. Familiar faces in the supporting cast include John Goodman as the front desk attendant in Oskar’s building, Viola Davis and Jeffrey Wright play individuals on Oskar’s list, and Stephen Henderson is a locksmith.Though Hanks and Bullock are ancillary, their presence, along with that of Oscar-nominated director Stephen Daldry, assured the film’s obvious, arguably shameless aspirations for Oscar gold. Daldry is suited to the task, yet his approach is strangely schmaltzy despite the honesty of his earlier work, such as Billy Elliot and The Reader, which, at least thematically, he seems to combine here. The former example followed a gifted child on a journey of self-discovery and fatherly acceptance; the latter dealt with a global tragedy through one individual’s emotional mystery.

Extremely Loud & Incredibly Close is a very manipulative film, designed for maximum emotional impact in sometimes transparent ways. Daldry has no qualms about exploiting every opportunity to milk tears out of his audience. His thematic toolkit is overflowing, leaving the film to feel narratively congested. A film about a child dealing with losing a parent in 9/11 would be enough. A film about a child with a mild case of Aspberger’s would be enough. A film about a boy searching for clues about his dead father would be enough. This one manages to be about all three and becomes overloaded, despite some very powerful scenes and all-around convincing performances. The trick with such sentimental material it to not make the viewer feel like they’re being played, but for most of this viewing experience, the audience will feel pushed and pulled and catered to in ways that, though often affecting, are far too obvious.