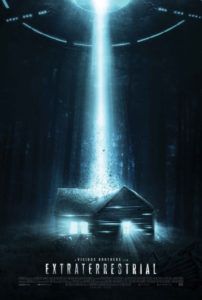 About as intelligent as an anal probe and just as fun, Extraterrestrial is the latest horror yarn from the writing and directing team known as The Vicious Bothers. The Canadian filmmaking duo of Colin Minihan and Stuart Ortiz were responsible for Grave Encounters in 2011, and their first follow-up (they wrote, but did not direct, Grave Encounters 2) involves an alien abduction scenario. The press materials from distributors at IFC Midnight call it “a different kind of encounter,” but it’s really just components borrowed from other alien abduction and cabin-in-the-woods movies you’ve seen before. And while following established conventions alone isn’t enough to discredit a movie, this one offers none of the technical or narrative innovations that might otherwise make it bearable.

After a pre-title prologue where a nameless teen is lifted off into the sky on a dark and stormy night, the movie picks up with protagonist April (Brittany Allen) and her longtime boyfriend Kyle (Freddie Stroma). She’s planning a quiet weekend alone with her BF to take some photos of her family’s cabin for a realtor, but Kyle, the class-act that he is, invites a third, fourth, and fifth wheel along to spoil their romantic trip. The insufferable Seth (Jesse Moss, who played the over-the-top psycho from Tucker and Dale vs. Evil) and his airhead girlfriend Lex (Anja Savcic) are joined by April’s best friend Mel (Melanie Papalia). Together, they drive up to the secluded cabin for a weekend of partying down.

Their joyride into the wilderness is interrupted by Sheriff Murphy (Gil Bellows), whose perpetual loose tie and stubble look like he’s forever hungover. He warns the youngsters to behave in his town and sends them on their way. Of course, much drinking, drugs, and fireworks lead to them witnessing a fireball in the sky. Turns out a flying saucer crash-landed nearby. With the help of a local pot-grower and conspiracy theory nut (Michael Ironside, mildly entertaining), the obnoxious characters defend themselves against menacing gray aliens rendered via bad CGI. Nevertheless, they and the local authorities are taken out one by one, either by the mind-controlling aliens or their hovering UFOs, complete with blue lights reminiscent of those in Independence Day.

Only when the final ten minutes arrive and the few survivors awake in the spaceship does the movie offer anything that might be considered impressive visual design. Earlier scenes show a polish to Samy Inayeh’s HD widescreen lensing, but they’re devoid of much style. Inside the alien ship, The Vicious Brothers evoke Alien and Aliens, with a hint of Fire in the Sky for good measure—but certainly nothing that could be described as original. If there’s one moment that we can be thankful for, it’s that Seth gets it particularly bad. He’s an annoying, loud, and hateful character the audience cannot wait to see die. When he receives the aforementioned probe treatment, which in itself is pointless and tacky, it comes with the promise that we won’t have to listen to any more of Seth’s loathsome voice. So there’s that.

Worst of all, The Vicious Brothers attempt to engage the audience in a pathetic, uninvolving subplot about April and Kyle’s relationship. You see, Kyle wants to marry April, but she doesn’t want to be pinned down. By the last shots, when April weeps and pledges herself to Kyle for the rest of their lives, knowing they probably won’t make it anyway, we cannot help but think about how much-wasted screentime was spent anticipating this moment. It’s all very unintentionally funny and worthy of ridicule. And so, anyone forced to take Extraterrestrial without an accompanying soundtrack of mocking derision from the peanut gallery will be hard-pressed to sit still for the duration.