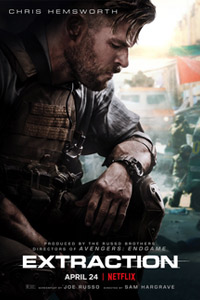 Early in Extraction, Chris Hemsworth’s mercenary character makes quick work of some hired goons who have kidnapped a young boy and held him in Dhaka safehouse. Using a combination of brutal hand-to-hand combat and explosive headshots, he drops body after body. For the final two bad guys, Hemsworth grabs hold of a garden rake conspicuously leaning against a wall. Why these well-armed kidnappers felt the need to keep a gardening rake inside of their lair, situated in the middle of a crowded city, we will never know. Their poor choice proves fateful. Hemsworth’s ex-Special Forces brute, who towers over each opponent by a foot and outweighs each of them by a hundred pounds of muscle, breaks this tool of agriculture in half and impales one of his targets with the sharp rod end. Then he wrestles with the last remaining thug until the man’s head is over the rake’s metal points. With one final push, Hemsworth jams his head into the spikes, impaling him to death. It’s only later that I realized Hemsworth’s character goes by the name Tyler Rake, making this already ridiculous sequence almost campy as Rake kills his victims with a so-named yard implement.

A blockbuster-sized Netflix actioner, Extraction follows the mold of those 1980s shoot-em-ups starring Arnold Schwarzenegger and Sylvester Stallone, only more self-aware (maybe). To be sure, the filmmakers had to be aware of the rake coincidence (right?), and so the viewer proceeds somewhat bemused by two hours of escapist bloody violence. The story—based on the graphic novel Ciudad by Ande Parks, Joe Russo, and Fernando León González—warrants comparisons to stuff like Commando (1985) or a Rambo movie. Hemsworth’s Rake is another in a long line of black-ops renegades who tries to atone for his chequered past and personal mistakes, seen here in blurry flashbacks, by finally doing the right thing on his latest mission. He’s hired to recover Ovi (Rudhraksh Jaiswal), the introverted son of a jailed Indian crime lord, who has been kidnapped by the competition. The culprit is Amir Asif (Priyanshu Painyuli), described as “Dhaka’s very own Pablo Escobar.” Asif, who has the local police and military in his pocket, has closed down the bridges and roads around the Bangladesh capital. Fortunately, Rake is a one-man-army, the sort of bravado action hero who wears aviator glasses and marches into the lion’s den only to emerge triumphantly.

Among the producers are Joe and Anthony Russo, the siblings behind many of the best MCU titles like Captain America: Winter Soldier (2014) and Avengers: Infinity War (2018). In their post-Marvel career, the Russos have teamed with superhero actors on grittier, R-rated fare from last year’s 21 Bridges starring Chadwick Boseman to the upcoming Cherry starring Tom Holland. Turning Hemsworth into a monosyllabic human wrecking ball with a heart for Extraction isn’t much of a stretch, but it proves (as Bad Times at the El Royale did) that he has more to offer than the God of Thunder. The script by brother Joe, however, proves almost laughably obvious, to the extent that I remain unconvinced of its seeming self-awareness. It might just be so dumb that the viewer makes the mistake of assuming its occasional irony is intentional. Consider Rake’s introduction as he wakes from a drunken bender and, in the badass equivalent to splashing water on his face, he leaps off a cliff into a lake, at the bottom of which he meditates for several minutes. That moment becomes even more absurd when Rake’s ability to hold his breath factors into the final shots. 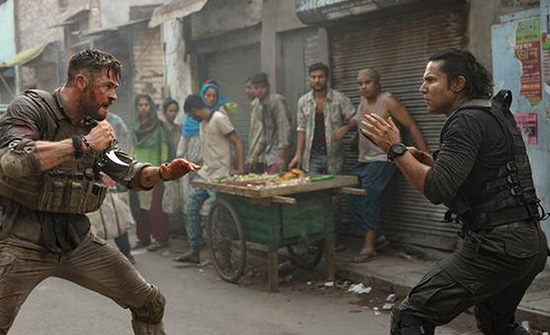 The screenplay bears no end of cornball flourishes and predictable double-crosses: Ovi’s purity and earnestness endear the boy to the hardened Rake, who lost his son years ago. Inevitably, there’s a father-son bond between the two, complete with hugs and shared backstories. And when Rake needs help escaping Dhaka with Ovi, he calls-in a favor with his smarmy former colleague, Gaspar (David Harbour), a character that functions as an obvious turning point in the plot. But if there’s a genuine surprise here, it’s the trajectory of Saju (Randeep Hooda), Ovi’s bodyguard, and Rake’s main competition in the combat department. The rest of Rake’s opponents appear in the form of nameless and faceless soldiers to advance the body count. The major exception is a curious sequence where Rake faces-off against a gang of small boys working for Asif; though he resists mowing down these “Goonies from Hell” in a hail of bullets, as he does everyone else, he tosses them about in a borderline comic scene.

Since there’s not much of a story, the action remains the reason to watch Extraction. It’s the first feature-length effort by director Sam Hargrave, who has worked with the Russos as a stunt coordinator on their Marvel output, as well as Atomic Blonde (2017). But the characters and situations feel secondary next to the visceral action scenes, which have received the bulk of Hargrave’s attention. Working closely with his actors, editors Ruthie Aslan and Peter B. Ellis, and cinematographer Newton Thomas Sigel, Hargrave orchestrates extended sequences that follow Hemsworth from one location to the next, creating the illusion of a single take. This digital bridging pieces together small scenes to look like a protracted whole, an impressive illusion even if digital blurs give away when one fragment connects to the next (like they did in 1917). All the while, Hargrave draws from John Wick’s strategic gunfire and The Raid’s brutal physicality to create a pastiche action style that, impressively, unfolds with clarity.

With its fidgety two-hour runtime and the nonstop procession of gunfire and explosions, Extraction grows tedious, largely as a fault of the screenplay. When the characters share their feelings in a sappily written scene, the viewer might be compelled to get a snack or use the restroom, even though Extraction is streaming on Netflix, and the pause button is inches away. Tyler Rake is an unremarkable action hero devoid of personality, and when the film attempts to build him up with a tragic past or his bond with Ovi, he becomes an even greater cliché. On the periphery, Golshifteh Farahani has an underwritten role as Rake’s handler, and her considerable range is wasted on a dull highpoint: firing an RPG into a helicopter. Extraction could have used more humor or action movie cheese to make the experience more diverting—more aware of its relationship with its audience. Instead, it pairs thrilling, relentless action with an unearned streak of self-seriousness that spoils its potential.