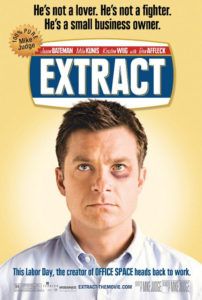 Mike Judge’s low-key comedy Extract consists of people sitting around and talking, mostly about their jobs and relationships and how awful they are. From those conversations, the characters make some terrible decisions. They take drugs, hire male sex workers, and accidentally dismantle testicles. Despite such raucous antics, the movie doesn’t rely on shocks to make us laugh. Judge’s ability to observe, identify, and satirize people without reducing them to mere stereotypes remains in full comedic force, making his approach a welcome change from Hollywood’s usual bawdy comedies.

Jason Bateman, finally breaking from his supporting player pigeonhole, stars as Joel Reynolds, the everyman president of Reynold’s Extracts. His company’s flavors include cherry, vanilla, root beer, and even a top-secret cookies ‘n’ cream formula, yet to be unveiled. General Mills has been eyeing his company for a potential buyout, and Joel couldn’t be happier. He’d like to retire early if only to get away from his factory of temp lineworkers and confirmed whiners. But, a freak accident leaves an employee (Clifton Collins, Jr.) with damaged bits and pieces, which means a lawsuit that threatens to ruin the buyout and force the company into bankruptcy.

Meanwhile, Joel has bigger problems, like being frustrated with his sexually non-responsive wife (Kristen Wiig). His spiritual guru bartender friend, Dean (Ben Affleck, sporting an awkward Jesus look), suggests they hire a gigolo to seduce Joel’s wife. Then, after she cheats on him, he’ll feel no guilt about cheating on her with the new temp he’s hired, Cindy (Mila Kunis), a scammer who’s secretly trying to convince the ball-less employee to sue Reynold’s Extracts for millions. Joel isn’t aware of Cindy’s intentions, nor does he realize that the male prostitute he’s hired will actually fall in love with his wife.

Judge’s characterizations are occasionally priceless. There’s the abominably boring neighbor, played by slack-jawed comic David Koechner, who stops Joel for a chat whenever he’s pulling into the driveway. He’ll prattle on about anything forever if Joel lets him. Anyone who’s ever been stuck in neverending, mind-numbingly boring banter with a neighbor can relate. Or there’s the man-whore Brad (Dustin Milligan), whose thick-headed dudery cannot be broken no matter how sound the logic. Characters like these are abundant throughout Judge’s work; thankfully, he never overplays them, and they rarely become caricatures.

As a comparison piece to Judge’s 1999 contemporary classic Office Space, well, there’s really no comparison. But Extract does indeed remain a consistently funny and well-balanced effort by Judge, certainly more so than 2006’s forgotten Idiocracy, a film that works in concept alone. Bateman makes the movie better than it should be, rendering a snobbish and sarcastic yet curiously likable character reminiscent of his role on Arrested Development. Whereas supporting roles in Hancock and Juno have made Bateman famous once again, he proves here that he can carry an entire movie. Place another actor in this role, and the movie wouldn’t work, particularly when considering the distracting appearances by Affleck and Kunis, and the thin line the movie walks throughout, bordering on over-minimalism.

The wackiness of the plot and character descriptions above may not do the unobtrusive movie justice. Judge isn’t an in-your-face director who employs fast cuts and flashes penis shots for a laugh. He’s grounded by the reality of his working-class conflicts, how they manage to be at once petty and involving. His presence behind the camera is virtually nonexistent, in that he has no particular visual style as a filmmaker; his creativity is left entirely to his comedy. But that’s all a movie like this really needs to have legs. And so, Judge’s ongoing study of middle-America remains intact, hilariously so.