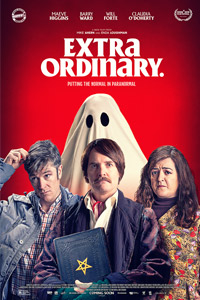 A promising debut feature from the writer-director team of Mike Ahern and Enda Loughman, Extra Ordinary is just clever, funny, and referential enough to earn a modest cult following. The film premiered at South by Southwest in 2019 and received a limited theatrical distribution almost a year later. The theatrical space, however, is not where it will play best, at least not outside of Midnight Madness showings. To be sure, Ahern and Loughman, whose experience includes commercials, music videos, and short films, employ a wide range of plot elements, gory explosions, and romantic comedy touches—all in a low-key manner fit for home viewing. It’s a lively pastiche that genre fans will enjoy, although it’s far from exceptional. And while the most obvious comparison seems to be Ghostbusters (1982), Extra Ordinary plays more like a riff on Peter Jackson’s The Frighteners (1996)—a darker breed of supernatural comedy with strains of bloody violence and occultism.

Standup comedian Maeve Higgins makes her lead debut as Rose Dooley, a lonely thirtysomething whose late father Vincent (Risteard Cooper) worked as a spiritual medium. With his gifted daughter by his side, Vincent hosted a local show called The Talents, where the two of them served as bookish paranormal investigators. Ahern and Loughman insert snippets from Rose’s VHS library of the show, which serves as a device to frame and offer exposition about the unfolding narrative. Years ago, after a “haunted pothole” incident in which her father died and for which she felt responsible, Rose gave up her supernatural talents to become a driving instructor. Even so, she’s still known around her small Irish community as a spiritual medium, and her voicemail clunkily tries to guide incoming phone calls away from her former métier.

Of course, Rose’s skills become integral to the plot when Christian Winter (Will Forte), a one-hit-wonder recording star from decades earlier, tries to arrange a comeback with the help of Satan. Christian, aided by his wife Claudia (Claudia O’Doherty) who keeps interrupting his demonic incantations, must sacrifice a virgin during the upcoming blood moon to ensure a resurgence of his musical career. Forte’s casting is pitch-perfect, as his vague lisp and obvious wig underscore the character’s ridiculousness, while the screenplay contrasts his silliness with some genuinely shocking acts. At one point, Claudia disturbs the floating virgin that Christian has already acquired, but as an episode of Vincent’s show tells us, if you wake an entranced victim of a Satanist’s spell, they will explode. Sure enough, Extra Ordinary gets more than one laugh out of an exploding human-sacrifice-to-be.

More than its supernatural aspects, the film’s central story entails a budding romance between Rose and a new client, Martin (Barry Ward), whose dead wife speaks to him and still nags him from beyond the grave. As it turns out, Martin has medium abilities as well, and soon enough, he joins Rose in exorcising several local ghosts—a nasty process that involves Martin vomiting up a mouthful of ectoplasm to expel a spirit. Meanwhile, Christian targets Martin’s teenage daughter, Sarah (Emma Coleman), using a penis-shaped staff that identifies her as a potential virgin for his ritual. But in an amusing undercurrent, Extra Ordinary exposes the notion of “virginal” (and occultism as a whole) as a decidedly patriarchal concept with narrow views of what constitutes losing one’s virginity.

The kitchen sink climax proves unwieldy as Ahern and Loughman cram in too much. The sudden presence of Rose’s very pregnant sister (Terri Chandler) and her random date (Jamie Beamish), doesn’t help clarify the denouement. Within the span of the last ten minutes, there’s a murder, an appearance by the Dark Lord, a thwarted sacrifice, a loss of virginity, the birth of a child, a family reunion, and a proposal of marriage. One or two of these would have been enough, but the sheer number of major events in the climax leaves one’s head spinning. There’s also the strange appearance of the devil, who appears as a figure cloaked under a sheet, like a cheap Halloween ghost. It’s never really clear why Satan looks the way he does (aside from cutting CGI costs), although that nonsensical quality supplies a chuckle.

Ahern and Loughman demonstrate their visual chops with a few inspired nods to horror classics. There’s a frenzied shot that recalls Sam Raimi’s relentless Deadite-perspective camera angles from The Evil Dead (1981). At one point, the filmmakers stage a recreation of the iconic image from The Exorcist (1973), where Father Merrin stands illuminated by a beam of light outside the MacNeil house, except with Rose outside of Martin’s place. Winking moments such as these make Extra Ordinary a pleasant and familiar experience that uses references to supply its comedy and horror elements, whereas the character work and humor feel truly inspired. Higgins and Forte are often laugh-out-loud funny, especially in their scene together during his traumatic driving lesson, and the would-be romance between Rose and Martin is touching. Still, there’s nothing too original or unpredictable about Extra Ordinary, though fans of the horror-comedy subgenre should appreciate its wannabe Shaun of the Dead (2004) quality.