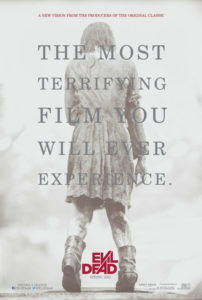 Any movie that kills the dog within the first ten minutes isn’t playing around, but that doesn’t necessarily make it “The Most Terrifying Film You Will Ever Experience.” Such a claim was made by Evil Dead’s effective marketing campaign and sets expectations entirely too high. More accurate: One of the Goriest Films You Will Ever Experience. Which is to say, not the goriest film you’ll ever see—not Peter Jackson’s Dead Alive (1992)—but pretty darn gory. As far as its scary quotient, the film isn’t scary enough. Doused in viscera, the film’s energy is directed toward achieving the nastiest practical makeup effects in recent memory, causing one to put down their concessions treat after an inevitable sudden loss of appetite. Produced by the original’s director and star (Sam Raimi and Bruce Campbell) and directed by newcomer Fede Alvarez, who impressed all with his attack-of-the-robots short Panic Attack!, the film offers a few appealing innovations on the original scenario, carnage and gore by the bucketload, and not much else.

After 2012’s ultimate satire on haunted cottage horror, The Cabin in the Woods, making a straight horror film about five twentysomethings retreating to a woodland cabin seems almost risky, if not pointless. Hasn’t the same old yarn about youngsters being slaughtered in the woods been done to death? But no matter how tired the premise may be, good writing, strong acting, and inventive direction can compensate for what the film lacks in originality. Here, credit for the screenplay goes to Alvarez and Rodo Sayagues, while Oscar-winner Diablo Cody performed an uncredited rewrite as well. Nevertheless, the screen story lacks two essential components: strong characters and humor. Unlike Raimi’s The Evil Dead (1981), which contains a low-budget charm and cheesy, over-the-top makeup effects that produced unintentional laughter, there’s nothing to laugh about in Alvarez’s version. And though Alvarez has put his own mark on the franchise by removing humor from the proceedings to create a more unrelenting experience, he’s forgotten that sometimes a good chuckle can bond us to the characters and events onscreen.

One of Evil Dead’s best alterations entails the reason for everyone trekking out to the middle of nowhere. Mia (Jane Levy) has tried and failed numerous times to kick her drug habit, and her friends have joined together to help her quit cold turkey. Three of her friends—the registered nurse Olivia (Jessica Lucas), the learned Eric (Lou Taylor Pucci), and room meat Natalie (Elizabeth Blackmore)—are joined by Mia’s estranged brother, David (Shiloh Fernandez). The first night, Mia smells something foul in their ramshackle cabin, and since she’s going through the first stages of withdrawal, she acts out and paces around, and her senses aren’t quite right, so she’s quickly dismissed. But then they pull back the rug, and there’s a cellar door, and in the cellar is some kind of hillbilly witchcraft site, complete with dead cats hung from the ceiling, a shotgun, and a creepy book bound in flesh and wrapped in barbed wire. Despite the written warnings not to read it, Eric opens the pages to find etchings of demons and vile imagery, and in reading the ancient verses in the book’s pages, he unleashes something into the woods.

Now a mysterious force moves through the forest and squirms into Mia (in a particularly unnerving scene that mirrors a notorious one from the original), who begins acting violently toward the others. One by one, the spirit inhabiting Mia infects nearly everyone, all of whom believe it’s a virus or something explainable. But when your eyes turn yellow and there’s a demonic voice speaking under your voice, it’s time to see a priest, not a doctor. Only Eric suspects the truth—that a demon wants their souls, and the only way to stop it is by dismembering, burning, or burying alive those possessed. His theory doesn’t go over well with the others. Aside from changing the nature of the characters and their reason for being at the cabin, much of Evil Dead’s plot unfolds in a predictable fashion, with Alvarez paying homage to the original by copying some of Raimi’s quick camera zooms and stylistic flourishes. Still, it becomes evident early on that any tweaks in character design are superficial touches, and the true raison d’être is gore, gore, and more gore.

One or two misdirections in the story prove effective for knowing fans of The Evil Dead and Evil Dead 2, such as when the otherwise personality-less Natalie must saw off her infected arm with an electric meat cutter. This critic felt a moment of optimism at the thought of a female hero taking over the renewed franchise with a chainsaw arm, much like Bruce Campbell’s ever-quipping cult-hero Ash. Alas, Natalie loses her other arm, and all hope for a heroine is seemingly lost with it. Then the second act shifts to Dave, an unimposing and almost passive character who finally makes a stand long after we’ve lost interest in him. However, Pucci gives the finest performance with the most watchable character, Eric, the resident bookworm who’s figured out the basic rules of their curse. Eric is the kind of character who could have enlivened the entire film had he been written with some funny, sarcastic jibes or quirkier mannerisms; but like everyone else onscreen, this character proves as plain as can be. Additionally, Levy impresses in her paranoid early scenes and in demonic mode, and also after the twist in the third act when Evil Dead manages to draw our interest again, if only for the last few minutes of screen time.

Everything onscreen is realized with clarity and control. The gory makeup looks real and genuinely gross, and the filmmakers’ resistance to CGI blood and body parts must be commended. The production quality itself surpasses the original, but that goes without saying (the original’s budget was about $100,000; the remake cost $14 million). Along with cinematographer Aaron Morton, Alvarez creates atmospheric scenes in the murky woods and intense sequences of violence inside the cabin, without any of the annoying light flickers or choppy editing we’ve come to expect from the post-Saw horror genre. Alvarez shows us things that make us squirm with disgust and apprehension, but the film never penetrates beyond surface value. In seeing demon-Mia slice her tongue down the middle or watching Eric pull a long broken syringe needle out of his face, groans in the audience will be prevalent. Regardless of how effectively revolting it is, Evil Dead’s high degree of repugnance doesn’t match the original’s fear, terror, or suspense—no matter how capably made the film may be. Raimi’s original worked on multiple levels and used its shoestring budget and wacko style as part of its appeal. The remake, which already has a sequel in the works, succeeds in delivering a serviceable gorefest. And, as gorefests go, you could do a lot worse.