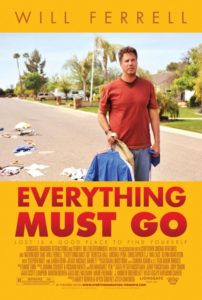 Following the careers of comedians Adam Sandler, Jim Carrey, and Robin Williams, Will Ferrell is taking baby steps to develop his dramatic acting career. Stranger than Fiction and Winter Passing began this movement for Ferrell, and Everything Must Go arrives without much of a bang. But if you exclude Ferrell, the film would be almost unbearably filled with self-loathing and low-key humor. Writer-director Dan Rush, working from Raymond Carver’s four-page short story Why Don’t You Dance?, fills in the blanks of Carver’s scenario—about a man whose possessions are strewn out on the lawn—and makes the whole thing rather obvious. Although, Rush made a smart choice in casting his lead. Ferrell’s usual loud, expressive antics are restrained here, but present under the surface, whereas a less boisterous performer may have left the protagonist’s subtleties far too understated.

The story has all the makings of a sad country song. After losing his job, Nick Halsey (Ferrell) comes home to find his wife has left him. His things are spread out on the lawn of his suburban Arizona home in no orderly fashion. His wife (who goes unseen) has changed the locks, shut down his cell phone, and put a freeze on their bank account. His company car is repossessed a month early. If they had had a dog, she would have taken it, or worse. Instead, they have a swimming pool converted for Koi fish. An alcoholic, Nick falls off the wagon and quickly becomes a sloppy drunk after mere months of sobriety, and resolves to live on his lawn with his stuff. The cops want Nick out if his yard, but his detective friend (Michael Pena) tells him the city will allow Nick to stay for five days under the pretense of a yard sale. Nick puts up the necessary signage to complete the guise, but he refuses to sell anything. Through the course of the film, Nick heals enough to sell away his former life and move on.

Supporting Nick are likewise aloof characters. Take Kenny (Christopher Jordan Wallace), the lonely teenager hired by Nick to help with the faux yard sale by making signs. Nick has agreed to teach Kenny how to play baseball in exchange for his help, but the subplot never comes to fruition. There’s also Nick’s new neighbor from across the street, Samantha (Rebecca Hall), a pregnant photographer who’s going through a similar situation as what Nick is putting his wife through. Both characters help Nick move forward, whereas others seem included as padding. Stephen Root’s neighbor-with-a-dirty-secret is only present for an unnecessary moment of gross-out humor. Laura Dern plays Nick’s former high school classmate; he looks her up on a whim and she confirms he has “a good heart”.

Fortunately (but perhaps not for the viewer), Nick never falls into the lowest of drunkard lows. He never becomes overtly cruel or monstrous, as Hollywood can sometimes depict his disease. Then again, he’s not a silly drunk either. He’s actually the least offensive or memorable drunk you’ve ever seen, and for a character study, Rush’s script doesn’t delve too deeply into this subject. Painting a portrait using broad clichés made to resonate through understatement, Rush sums up Nick’s problems by a variance of daddy issues and depression that we witness as the character watches old home movies. Ferrell’s ability to throw on a sad face in these scenes is evident, but he’s hardly affecting in any way that viewers will find meaningful.

Rush’s directorial approach is just as unremarkable as the narrative. Compare Ferrell in Everything Must Go to Adam Sandler’s dramatic turn in Punch Drunk Love and you find two similar performances, both supported with corresponding amounts of energy by their respective director’s style. While the latter has a wellspring of burgeoning emotion and fluid camerawork hidden behind a timid façade, the former is quite simply uninteresting and at times yawn-inducing. Viewers looking for an indie dramedy will chuckle once or twice but forget the experience, and those hoping for a rich dramatic swing from Ferrell will be left remarkably cold from the material. Worst of all, the film doesn’t have the audacity to be bad or particularly good, just undistinguished. In a way, that makes for the most infuriating brand of cinema.