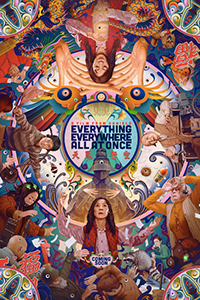 Multiverses have gone mainstream. From Rick and Morty to the MCU, fractured timelines and alternate realities have invaded pop culture. And why not? The fringe notion that our universe is just one of infinite possibilities liberates storytellers to consider how their characters became who they are—and how we’re all one decision away from changing the rest of our lives. They present a myriad of substitutes that allow us to question what life may have been like on roads not taken. If you set aside the theoretical science, multiverses also present a relatable metaphor. They represent the chaos of our times and how choices have consequences. When measureless realities begin to overlap, it feels comparably overwhelming to our current juggling act of war, global warming, the pandemic, the endless news cycle, work-life imbalance, and personal relationships. The Butterfly Effect (2004) and various Spider-Man movies (Into the Spider-Verse and No Way Home) have confronted the multiverse theory on a relatively minor scale, tossing a handful of universes together or considering a few distinct branches. But no film has yet captured the frenzied scope of the multiverse with as much delirious energy and imagination as Everything Everywhere All at Once. Consider yourself warned that the film will be discussed in detail in this review.

The writer-director team known as Daniels, comprised of collaborators Dan Kwan and Daniel Scheinert, deliver an ambitious sophomore feature that doubles down on the off-kilter humor and formal ambition of their first film, Swiss Army Man. Their surreal 2016 comedy brims with an adolescent’s sensibilities and energy. It follows a man stranded on an island with a flatulent corpse, delivering one of the weirdest, most tender-hearted, and indescribable films in recent years. After getting their start on music videos and comedy television, the filmmaking team has quickly established a reputation that echoes the whimsical existentialism of early 2000s fantasists such as Charlie Kaufman, Michel Gondry, and Spike Jonze. But the leap from their first feature to their second is a considerable distance in scope and ambition. Everything Everywhere All at Once is a mind-bender of epic proportions, full of stylistic daring, goofy ideas, three-dimensional performances, and an affecting earnestness. The film is determined to mine the multiverse’s possibilities. It overthrows any standard expectations with a sublimely messy assemblage of brain-scrambling science fiction, kung fu action, absurdist jokes, movie references, and end-of-everything stakes that miraculously feels grounded.

Case in point: The film’s conflicts revolve around Evelyn Wang (Michelle Yeoh) and her husband Waymond (Ke Huy Quan), both Chinese immigrants who married young and now operate a laundromat in a California suburb. Will they pass their audit handled by IRS agent Deirdre (Jamie Lee Curtis), a frumpy and impatient crab who shakes her finger at them for their messy accounting? Will Evelyn repair her relationship with her melancholic daughter Joy (Stephanie Hsu), whose issues with self-confidence stem from her mother’s impossible standards? Evelyn only makes matters worse when her ever-disapproving father, Gong Gong (screen legend James Hong), visits for a Chinese New Year party. She demands that Joy keep her relationship with girlfriend Becky (Tallie Medel) a secret from him, leaving Joy feeling shamed and unloved. With Evelyn juggling the audit and planning for their party, she barely notices that her eccentric husband has been trying to deliver divorce papers. Before any multiverse complications enter the mix, Evelyn’s life already feels out of whack and overloaded. 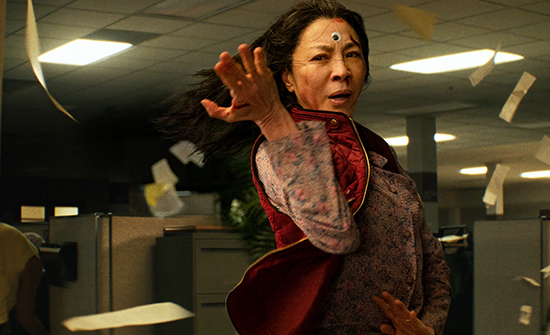 Then something happens. Arriving for the audit at IRS headquarters, Evelyn receives a visit from an alternate Waymond from the Alpha-verse, where humans have learned to transfer their consciousness to other universes. Suddenly, her Waymond behaves differently, talks of fantastic things, and warns her about an agent of chaos named Jobu Tupaki—an evil force who’s building something that can destroy everything across all universes. Evelyn learns that she can enter the mind of alternate versions of herself to acquire skills. For instance, she leaps into a version that never married Waymond and instead trained in kung fu, then became an international movie icon not dissimilar from Yeoh, the star of Crouching Tiger, Hidden Dragon (2000). By doing so, she gains that Evelyn’s martial arts skills. And so, while Evelyn acquires skills, she must survive Jobu Tupaki’s henchmen, who also verse-jump, leading to comic fights where Deirdre becomes a baddie. But this setup is just a jumping-off point for a scrambled film that switches from one universe to the next, one plot device to the next, one tone to the next like the oddly symphonic pleasure of discordant music. And while all life everywhere might be at stake, somehow, Evelyn and Waymond’s taxes remain front of mind.

Much of the ensuing chaos takes the form of elaborate fight sequences choreographed by Andy and Brian Le. Borrowing Joe Bob Briggs’ device for describing screen violence, the film contains fanny pack fu, Pomeranian fu, dildo fu, hibachi fu, and many others. And the filmmakers stage these scenes in everyday locales—much of the film takes place inside a drab IRS office—to underscore an irony about the multiverse hanging in the balance. Yeoh, of course, makes everything look effortless, playing her many parts with a pitch-perfect blend of comic timing, self-discovery, and slapdash improvisation. Quan, best known for Indiana Jones and the Temple of Doom (1984) and The Goonies (1985), also delivers some memorable action and much of the film’s tenderness. However, every actor plays more than one version of their character, requiring them to alter their performance with the same agility and sense of play infused by editor Paul Rogers—who makes his impossible job seem sprightly. As a result, there’s a limber self-assuredness to everything happening onscreen, and it’s all given cohesion by Daniels’ vision, the score by Son Lux, and the cinematography by Larkin Seiple.

As the film goes on, Evelyn’s interdimensional journey takes her to strange new realities, where Daniels’ sheer oddball humor, surreality, and film references explode into an abundant visual exhibition. In one universe, Waymond appears as a version of Tony Leung in scenes inspired by Wong Kar-wai’s In the Mood for Love (2000), complete with blurry slow-mo and green-hued streets. Another universe places Evelyn and Joy into the bodies of piñatas, and in yet another, they appear as rocks who talk in onscreen titles. The strangest is a universe where people have hot dogs for fingers and play the piano with their feet. My favorite universe stems from a verbal misunderstanding and ultimately nods to Pixar’s Ratatouille (2007), with a teppanyaki chef that hides a rodent named Racaccoonie under his hat. Each of these universes imbues Evelyn with a new skill, but they also give her new perspectives. Our main version of Evelyn realizes not only that she’s living as her “worst self” but that she’s capable of so much more. So while each of these universes might seem pointlessly random at first, each leads to a new facet of Evelyn’s self-understanding. What is more, the actors make every alternate version of their characters feel like they could have developed from the same individual, lending the multiverse pandemonium an unlikely coherence.

Everything Everywhere All at Once ultimately relies on the cliché “love conquers all” theme to resolve the multiverse’s problems. It’s a writer’s conceit that recalls Christopher Nolan’s solution to Insterstellar (2014), a film of vast temporal and spatial complexity that employs love as a scientific law that pulls its character through the other dimensions. Similarly, Daniels’ screenplay doesn’t concoct some elaborate gizmo or scientific solution to the increasing insane disarray of overlapping universes; rather, they rely on a grounded, surprisingly emotional center involving generational family dyanmics. In the film’s second half, when the crazed reality-jumping turns into a kinetic rhythm (bound to induce seizures in the photosensitive), Evelyn and Joy’s troubled relationship at the center pulls us through the proceedings with emotional clarity, despite the potential of the film crumbling under its conceptual weight. Yeoh gives possibly her finest performance to date amid the disarray of Evelyn’s life, testing her talent in the anarchy. At the same time, Hsu’s range extends from mischief-maker to teary-eyed breakthroughs. 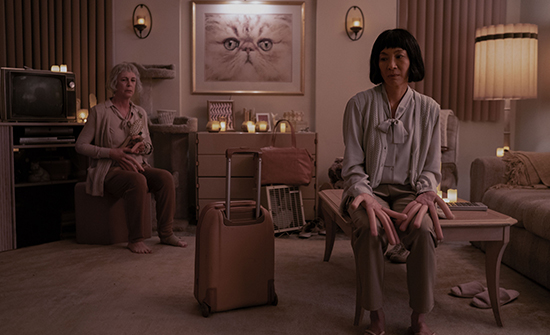 Watching a film so narratively and structurally out-there, you begin to ask yourself, “How does one even begin to plan something like this?” There must be hundreds of universes on display and just as many emotional responses from the audience. I saw the film in a packed theater, and the communal engagement was palpable, regardless of how labyrinthine the plot may be. Daniels achieve something reminiscent of Memento (2000) or Inception (2010), where Nolan explores an intricate temporal layering that requires the viewer to piece together the whole picture in their head—and achieves it with absolute precision. Everything Everywhere All at Once feels more playful and haywire than a Nolan film, of course—more like Terry Gilliam on acid. But audiences will nonetheless experience the intended laughs, cries, gasps, and wows, making every quantum leap along the way. The filmmakers toy with aspect ratios and zippy editing in a manner that feels adventurous and exciting, but there is a mad logic behind their choices, and absorbing it all will take more than one viewing. With all of this in mind, it’s unthinkable that Everything Everywhere All at Once cost only $25 million to make.

No film with this much going on, with this much ambition, and with this many universes will be flawless. Running 139 minutes, it’s perhaps too long in its volleying back and forth, and it boasts too many big speeches near the finale. And yet, its spiraling out of control proves wildly entertaining, while some of the film’s attempts to recompose itself prove less so. But the overall effect and invasion of the senses remain exhilarating, irrepressible, and downright exhausting in the best way imaginable. For every inspired fight sequence, movie reference, bizarro detail, or existential idea driving the film, it also feels like the kind of work that could only be made by people who have spent countless hours in their heads, pouring over possibilities and regrets, and wondering, “What if?” Kwan and Scheinert have accomplished something significant here. It might be, as one character describes, “just a pointless, swirling bucket of bullshit,” and some viewers will no doubt agree. Alternatively, it might be a life-affirming experience achieved with bold, imaginative filmmaking. Either way, Everything Everywhere All at Once is unlike any other single film ever made, and in today’s homogenized market, such oddities should be celebrated and cherished.