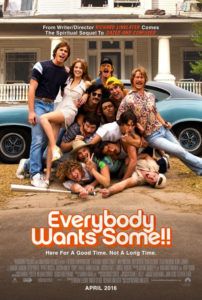 Richard Linklater’s characters always have a philosophy, insomuch that even the lowest of them seems more interesting than if another filmmaker had brought them to life. Consider Jack Black’s predictably slackerish character in School of Rock (2003), who infects the classroom of youngsters he’s substitute teaching with his impassioned love of yesteryear’s guitar heroes, giving all the students a greater sense of purpose, self-discovery, and identity in the process. It’s deceptively meaningful philosophies like this one that drive Linklater’s best work, whether it’s a bunch of drug-addled outsiders in a near-future world in A Scanner Darkly (2006), or thoughtful discussions about life and love between Ethan Hawke and Julie Delpy in his Before trilogy. In Everybody Wants Some!!, Linklater’s “spiritual sequel” to his cult comedy classic Dazed and Confused (1993), the philosophies of his characters are every bit as rich as you might expect, but they’re also buried beneath an exterior of a particularly jocular college experience.

On the surface, the film looks like a standard college farce, complete with dudes trying to get laid, rampant alcohol and drug use, casual sex abound, and general irreverent partying. But among these characters you won’t find the standard genre conflict of slobs vs. snobs, nor any conflict at all in the traditional sense. Aside from the occasional clash of massive male egos entrenched in competition (playing ping-pong, flicking knuckles, or a baseball scrimmage), these mostly mustachioed young men get along well despite their differences. The opening shots show Jake (Blake Jenner) arriving at Southeast Texas State University in an Oldsmobile 442, his collection of LPs in the back seat, and The Knack’s “My Sharona” blaring on the radio. A freshman pitcher, Jake enters his new abode, one of the university’s two baseball houses, greeted by future teammates who have a disdain for pitchers. And therein represents the sole adversity Jake must overcome—going from the best baseball player at his high school to being surrounded by a house full of players who were all the best at their respective high schools too.

Just as with Dazed and Confused or Linklater’s debut Slacker (1991), Everybody Wants Some!! contains less a plot than a series of vignettes loosely tied together. Over the course of the weekend before the first day of 1980’s fall semester, a morning countdown reminds us how long before class starts (example: “1 day, 18 hours until the first day of class”). Jake encounters his new team’s ostensible captain, McReynolds (Tyler Hoechlin, behind a mustache that would make Tom Selleck envious), who makes it his mission to ridicule freshman. Joining Jake are other freshman: Jake’s humorless southern-fried roommate Billy Autry (Will Brittain) and the ever-awkward Brumley (Tanner Kalina). Friendlier teammates are the smooth-talking Finn (Glen Powell); the generally affable Dale (J. Quinton Johnson), the group’s sole black player; Roper (Ryan Guzman), who likes to boast he has the best butt on campus; and Willoughby (Wyatt Russell, son of Kurt), the mind-altered stoner who encourages his team be themselves and just be “weird”.

As Linklater takes us from one party to the next, from one bromantic interaction to the next, from one college function to the next, his technical presentation remains stellar. Production designer Bruce Curtis and costume designer Kari Perkins recreate the time and place in authentic detail, while music supervisors Randall Poster and Meghan Currier layer the soundtrack with everyone from The Cars, Van Halen, Blondie, to Devo. One of the film’s best scenes involves five guys in a car singing “Rapper’s Delight” by the Sugarhill Gang, and everyone knows the words. Shane F. Kelly’s digital photography even manages to look like 1980. Fortunately, all this formal expertise amounts to more than just another college charade. Like the subplot in which Jake courts Beverly (Zoey Deutch, charming), a performing arts major who engages Jake in those long, ponderous, meaningful conversations the writer-director has become famous for—and they deepen not only Jake, but the entire film.

To be sure, Everybody Wants Some!! is a much more mature film than the 1970s-set Dazed and Confused, perhaps because Linklater was in his thirties when he made the first film, and now he’s in his fifties and has more time to reflect. His characters seem far less angry and mean-spirited next to the 1993 bunch. Even the hot-tempered pitcher Niles, aka “Raw Dog” (Juston Street), this film’s equivalent to Ben Affleck’s character in the original, manages to have a soul and prove more ridiculous than frightening, as Affleck was. (A hilarious scene finds Niles ranting “I’m too philosophical for this shit!” after McReynolds hits one of Niles’ unhittable fastballs.) And while the sexual antics were purveyed by cruel and vulturine means in the earlier film, Linklater demonstrates a degree of equal-opportunity sexism. There’s an amusing montage in which these baseball jocks blow-dry their wavy hair and comb their moustaches, donning skin-tight jeans and observing their butts in the mirror—a sequence usually attributed to female characters, as in Dazed and Confused. Meanwhile, the female dominatrix at a performing arts party makes all the men shrink in their pants.

Indeed, Linklater seems much more interested in deconstructing his party animals this time around. In the second-to-last shot of the film, a college history professor writes on the chalkboard a line that gives the entire film a profound sense of purpose: “Frontiers are where you find them.” That pursuant theme in Dazed and Confused and Boyhood (2014) brings yet another Linklater character to the existential cusp of his future. Jake’s sincere open-mindedness finds him accepting and embracing of different types of people and experiences. He’s dancing at the local disco bar Soul Machine one moment, line-dancing at a cowboy bar the next, and later finds himself in a mosh pit at a punk show. It could be that he’s “adaptive” like Finn, willing to change his identity to chase his latest conquest. But when Jake’s friend from high school shows up in full punk gear, the transition hardly seems to faze him. Similarly, only a few of the players on Jake’s team hold delusions of grandeur about playing pro-ball, while many of them have already accepted that baseball isn’t in their future. So what then? Why play in college? What will their lives become after their baseball plans fall though?

Dazed and Confused wasn’t a major hit upon its initial release, nor will be Everybody Wants Some!!, I suspect. Like the best filmmakers, Linklater’s output requires time to digest and reassess. Love for his films usually comes over time and upon repeated viewings. From the time I watched the film to the time I posted this review, I’ve pondered and weighed the film’s meanings and thoughtfulness—how it encourages its audience to live in the moment, accepting everyone for what they are with open minds and hearts. And because Linklater constructs his filmic hangout as a breezy weekend of nostalgic bliss, the two-hour runtime passes by (quite regrettably) fast. A party movie on the outside, a philosophical liftoff to finding oneself on the inside, Linklater’s bittersweet Everybody Wants Some!! weighs all the possibilities and promises of the college years, while reminding his audience that frontiers are an illusion no matter your age.