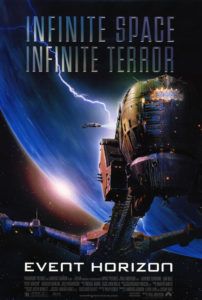 Amid his long list of Z-grade actioners and mindless videogame adaptations, Paul W.S. Anderson comes as close to making a real film as he’s ever likely to come with Event Horizon. If only he could get that whole story thing down. Having slowly earned a minor cult status since its 1997 release, the film stands apart through the audacity of its goriffic imagery and the potential of its psychological science fiction-horror concept, however muddled by the script. Though fondly remembered as it may be, neither nostalgia nor genre-bending fandom distracts from the formulaic plot structure or inane dialogue spoken by actors too good for the material. And in the end, Anderson proves only that he cares more about purveying senseless violence than actual filmmaking.

Some audiences don’t mind that the film’s ideas fail to live up to their possibility; they’re just pleased to see disturbing bloody violence, even if that means reducing lofty potential to a mere And then there were none formula—you know the kind: Characters meet their doom one by one, sparking a mystery, until the cause is dramatically revealed in the finale. Leaving it to the audience to decide what’s more important, story or aesthetics, Anderson’s (eventual) commercial success here makes a strong argument that pure visual ingenuity triumphs the need for, say, a plausible plot or tolerable dialogue. But the director loses the debate by splitting the result down the center and reducing his promising concept to sleepy horror movie tropes. Every scene is derivative of some classic: 2001: A Space Odyssey, Alien, The Black Hole, The Shining, Solaris—they’re all here. So it’s no wonder that the screenwriter, Philip Eisner, later wrote Mutant Chronicles.

The story, set in 2047, involves a space rescue operation orbiting Neptune, where the lost vessel Event Horizon has miraculously reappeared after seven years. It vanished when it opened the first man-made wormhole and didn’t return from its destination. Where did it go? What happened to its crew? The roughneck team on the search-and-rescue craft Lewis and Clark voyages out to answer these questions, its orderly Captain Miller (Lawrence Fishburne) barking orders, its blue-collar crew chummy in the way every space crew has been since Alien. They’re accompanied by the lost ship’s designer, Dr. Weir (Sam Neil). He explains that his craft was made to “bend the universe” and punch a hole therein to instantly travel from Point A to Point B. When coming upon their destination, it’s apparent something bad has happened to the previous crew. Bloody carnage covers a wall. Horrific video records suggest the crew went mad and slaughtered each other, but not before telling anyone listening to the log to “Save yourself from Hell!”

At the heart of the adrift ship resides the Gravity Drive, a whirling ball of lights and metal that opens up a portal to who-knows-where—cryptic messages from the former crew would suggest a Hell-like alternate dimension, but the movie never clarifies to the point of understanding. Suffice it to say that the returned vessel is now evil and somehow alive; it causes the Lewis and Clark crew to hallucinate about their various pasts. For some reason, Dr. Weir goes nutso and begins murdering his comrades. The panicky crew still has time for snarky comments, though. Flash weird and bloody images onscreen, cut to the eerie Gravity Drive for effect, input some techno music here and there, and you have a movie. At least in the eyes of Paul W.S. Anderson.

So why is Event Horizon regarded with such high esteem by cultists? How is this film any different than Anderson’s own Alien vs. Predator or Death Race? What do its followers see that critics are missing? Whereas the cult classic status of something like The Mist or Zombieland comes vindicated by a stylish-if-non-mainstream product, here’s a small phenomenon that’s altogether baffling, resultant primarily from impressive home video sales and frequent airings on late night cable television. Horror fans have elevated the film to ridiculous degrees, which can only be attributed to its wowing capacity for brutal descriptions of unintelligible violence, challenging even Hellraiser in its yuck factor.

Production designer Joseph Bennett may be the film’s sole redeemer; in conceiving the picture’s admittedly striking look, he brings to life green glowing corridors and the chilling Gravity Drive—the latter being an actual setpiece, and not some computer animated effect. His designs might not be as practical as some other science-fiction spacecraft, with its pointless ornamentation and bizarro shape, but he does what he does with style. The film might suffer from mid-1990s brand CGI, complete with floating zero-gravity debris that looks conspicuously like Flubber, but Bennett’s sets never fail to give Event Horizon’s audience the willies. His work is good enough to surpass Anderson’s substandard direction, demand that viewers overlook the plot, and watch simply for the visual artistry at work.