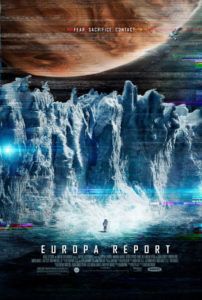 Nowadays, filmmakers combine the overused “found footage” style with just about any genre, although horror movies and ghost stories seem best suited for such tales of home-video-recording-gone-wrong. We’ve seen “found footage” movies about exorcisms, forest trolls, and superheroes, but here’s hoping someone breaks the mold and creates the first blending of “found footage” and romantic comedy, or “found footage” and period drama. A critic can wish. Anyway, just two years after Apollo 18, which was a low-budget yarn about a 1974 cover-up of an alien-infested Moon landing, Europa Report marks the second foray into a “found footage” movie about astronauts. Inspired by the 2011 discovery of lakes beneath Europa’s icy surface, the movie, directed by Ecuadorian filmmaker Sebastián Cordero, leaps into the future to detail an ill-fated mission to Jupiter’s moon.

Philipp Gelatt’s non-linear script jumps back and forth between the mission footage from the Europa One spacecraft and tearful post-disaster commentary by grounded mission chief Dr. Unger (Embeth Davidtz)—meaning only portions of the movie occupy the “found footage” style, whereas the sections with Dr. Unger and her staff (including a wide-eyed Dan Fogler) are presented in faux-documentary style. As Dr. Unger explains, the privately financed mission cost $3.7 billion and sent a crew of six to Europa to study the surface and hopefully find trace elements of extraterrestrial life. The international crew is made up of straight-faced astronauts, including captain William Xu (Chinese actor Daniel Wu), pilot Rosa Dasque (Romanian actress Anamaria Marinca, from 4 Months, 3 Weeks and 2 Days), an engineer (Swedish thesp Michael Nyqvist), a doctor (American actor Christian Camargo), a biologist (Polish actress Karolina Wydra), and a chummy crewmember played by District 9’s South African star Sharlto Copley.

Production designer Eugenio Caballero (an Oscar winner for Pan’s Labyrinth) has created a convincing, cramped spaceship design complete with tight compartments and close-quarters living spaces. Cordero’s verisimilitude in this respect is undeniably impressive, especially given the production’s low budget. The science-minded depiction of space travel and technical terminology is immersive and believable. But the structure of Europa Report and foreshadow-flashes of something terrible to come cheapen the otherwise painstakingly created mise-en-scène. As Dr. Unger talks about the fate of the mission early on, we see glimpses of only five crewmembers on the ship. Someone evidently dies before the ship’s transmissions to Earth go dark, an event that occurs before the crew reaches their destination. Moreover, the footage periodically cuts to a jolt of static-layered screams, suggesting things become horrifying later on.

These hardly brainy appetizers build up to an underwhelming series of events that, if it weren’t for the undue teases, might’ve been quietly fascinating on their own terms. Over the 90-minute runtime, the movie creates the question of What happened up there? Our first disappointment comes when the most likable crewmember and the cast’s most lively actor, which is Copley’s role, is left out in space when a repair job goes awry. Before we see this, however, Cordero hints at his absence by showing his conspicuously empty chair. In the meantime, we see Nyqvist’s character develop a mild case of space madness, and he becomes suspect. When Copley is finally off-screen for good, the remaining cast cannot make up for his high-energy presence. And then there’s the arrival on Jupiter’s second moon, which degrades into body count territory when the crew discovers a mysterious bioluminescent light glimmering under the surface of the ice and outside the ship.

Ultimately, Europa Report strives to combine the scientific realism of 2001: A Space Odyssey (complete with a hint from Johann Strauss’ The Blue Danube) and the exploration-inspired chills of Prometheus, but it fails to totally achieve either mood. In more than one sequence, the crew laments technical problems inherent to space travel, and these moments are interesting in a very shy sort of way—but they’re never as fully absorbing as Kubrick’s film. As for the monster movie aspect of the story, it relies too heavily on its final shot (a common problem with “found footage” movies) and, in that moment, tries to summarize our many lingering questions into a single, unsatisfying answer. Though an admirable technical effort, Europa Report doesn’t know what it wants to be. Cordero can’t seem to decide if he’s made a horror movie or a heady sci-fi tale, and his genre mashup feels unbalanced for it. On the whole, the movie feels as though the team of four editors has reduced the footage down to a skeletal framework, whereas more time spent in the shuttle and getting into the rhythms of space travel would have had an immersive effect on the viewer. Alas, Cordero’s aims are far lower than the teeming-with-potential material suggests, and the outcome suffers for it.