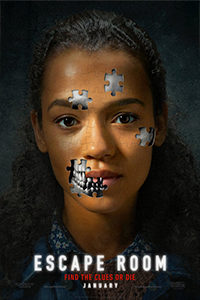 Escape rooms have been the trendy activity for hipsters and office team-building for the last few years. If you’re unfamiliar, here’s how it works: You and several other players enter an enclosed game arena (usually a converted living or office space) on a time limit and, before the clock runs out, you must work together to decipher clues or solve a series of puzzles to earn your freedom. If you fail to escape, the half-invested employee supervising the experience tells you what clues you missed, and then you go home. Admittedly, it’s a fun diversion depending on your team. At any rate, it was only a matter of time before Hollywood adapted the fad into a horror movie. In Escape Room, several victims expecting a high-end version of their favorite pastime are duped into participating in elaborate, killer puzzles created by a mysterious gamesmaster. One by one, they succumb to the escape room’s deadly traps in this less gory, PG-13 rated version of Saw (2004).

The story follows a group of strangers from various walks of life, as each receives a mysterious package with a note inside promising a $10,000 reward should they complete an escape room challenge. The scheme is put forth by a mysterious company that recalls the secretive institution from David Fincher’s The Game (1997). But once the players arrive at the nondescript location in the middle of Chicago, they turn over their smartphones to a creepy security guard and find themselves locked in a room whose temperature gradually increases. They all assume the heat is just part of the game; soon enough, however, they realize their lives are in jeopardy.

The characters consist of stock types: The bookish college student Zoey (Taylor Russell) prefers sodoku puzzles over socializing. The alpha male Jason (Jay Ellis) is a cocky, successful trader, and he aggravates every situation with his insults and irrational antagonism. Amanda (Deborah Ann Woll) served in Iraq and has lingering PTSD issues. The resident loser, Ben (Logan Miller), is a grocery store stock boy who believes the next viable step in his career is an advancement to a checkout clerk. Mike (Tyler Labine) is a trucker with a positive attitude. And Danny (Nik Dodani) is the resident nerd and escape room aficionado—who comically expresses his annoyance that the other players aren’t appreciating the details and immersiveness of the game.

Each of the ensuing rooms contains a clue or gimmick that relates to one of the characters, suggesting a grand purpose to the proceedings, a wrinkle that the players don’t discuss until far too late into the movie. For instance, a burn victim must face her fear as the first room becomes an oven. Another player who experienced hypothermia before must survive the cold once again in a wintry room, where, quite tediously, the players must access a key frozen within a block of ice—at which point the viewer finds themselves waiting for ice to melt. Other rooms include an upside-down pool hall, a noxious triage center, and a trippy drug room (the best of the bunch, if only for the goofy hallucination CGI).

The screenplay by Bragi Schut and Maria Melnik boasts two strong female characters at the center, some nifty puzzle concepts, and a memorable death or two. Several of the characters—those played by Russell, Woll, and Miller—have been developed enough to make them more than the hollow shells that usually inhabit such body count fare. Unfortunately, the movie never involves the viewer in the puzzle or riddle-solving process. The characters rush from clue to clue, and we just watch as they figure it out. It’s a passive experience. Worse, the dialogue is sometimes unintentionally laughable. There’s literally a point where someone shouts, “Oh no, it’s another riddle!”

Escape Room has limitless potential for comparisons to the first Saw. Both involve cliché characters, all of whom share a mysterious connection, and are turned into minced meat by a clandestine overseer for silly reasons. Both are more concerned with elaborate deaths than, say, character arcs or believable scenarios. Both have a deeply unsatisfying ending that sets up a sequel. Besides Saw, the viewer is reminded of several other titles when watching Escape Room: The Cabin in the Woods (2011) and last year’s Game Night came to mind as well (comedic bits aside). Even so, director Adam Robitel (Insidious: The Last Key) and his editor Steve Mirkovich keep the material fast-paced and coherent enough that, regardless of the viewer’s passivity in the unfolding plot, the events as they occur remain watchable on a purely visceral level.